After breakfast, while Mark was using the slow hotel lobby wifi, the girls and I walked around Los Lagos’ small zoo area. The butterflies in the aviary were nice, but there weren’t that many of them. We saw a lot of cool frogs including a little baby red eyed tree frog (and of course Genevieve saw her poison dart frogs). The ants were still interesting, as were the frogs in the pond that you could hear but not see. And the alligators are just as large and lazy as they were on our last visit. Mark had done s 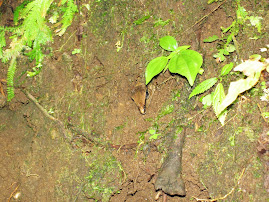 ome research and thought that the La Fortuna Waterfall was something we might like to see. With only the sketchiest of directions, we set out. Down the wrong road apparently. Turned around back to La Fortuna and tried again and this time success! Found a likely looking billboard pointing down a road and off we went. Funny thing was the road went from concrete to gravel to concrete to gravel. Not sure what was up with that? Maybe each landholder had to pay for his own stretch and some didn’t want to. Anyhow, we made it to the waterfall, paid our admission and started off. First the overlook for great photos, then down and down and down 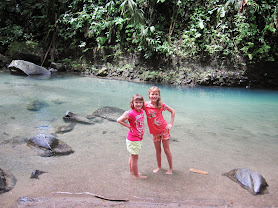 to the pools themselves. Genevieve spotted this lizard (we think) in the side of the hill, man she’s got good eyes! We mad 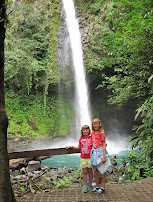 e it to the bottom and enjoyed looking at the pools and wading in the water, and then of course we had to climb back up. We made it and treated the kids to ice cream from the gift shop and then Genevieve got locked in the bathroom! We had to get the guy 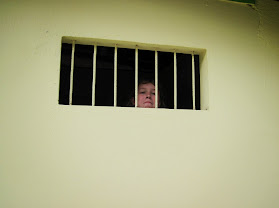 with the key and that didn’t work and then another guy came with more keys and finally got the door open. We told her not to worry, after all we could pass food through the bars if we had 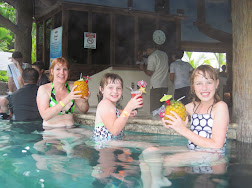 We had a nice lunch at the Gecko Gourmet, and then went shopping around La Fortuna for souveniers. We weren’t really finding anything although the girls did find some earrings and of course we managed to find the chocolate store in town. Headed back to Los Lagos where we hit the pools all afternoon. The girls even got to partake of the swim-up bar, and we didn’t let a little rain slow us down.

That night we had dinner at the Lava Lounge which is a really good deal for dinner in expensive La Fortuna.