Charlotte and I headed out early to get croissants at the patisserie we’d seen yesterday. It was more of a table service place than a 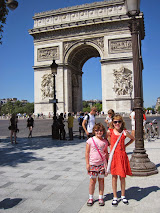 boulangerie, but we still got our sies pain au chocolate for breakfast. After everyone was full, we headed out on 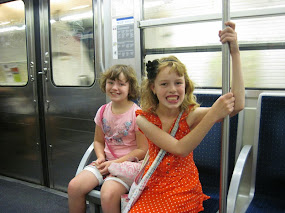 the metro to the Arc de Triomphe. Of course the ticket machines wouldn’t take our credit cards but fortunately we had enough cash and there was one machine that took bills. The Arc is indeed very impressive, so we walked around it and admired for a while. Then we went down the Champs-Elysees. It’s mostly chain stores, but we did manage to find some cute stuff for the girls at Naf Naf. We also enjoyed the Louis Vuitton flagship store, as well as Zara where the girls got many outfits. As we were well down the boulevard Genevieve discloses that she really wanted a scarf from Louis Vuitton so we vow to return a different day. We went to Le Gran Epicerie for lunch, which was a bit of a bust because the food was all cold, and we had trouble deciding what we would like as it was all so overwhelming because of how much was there. But we did buy some fun stuff to have later, like fancy pastries for dessert and macarons.

Then we had to hurry to get to the Orangerie. Mark had really wanted to see Monet’s Water Lilies again, and had remembered the museum as being the D’Orsay but fortunately I had read a guidebook that morning and knew they were in the Orangerie, which is also a 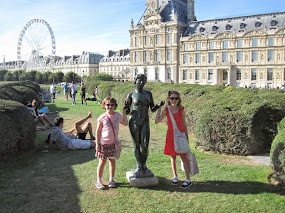 much smaller museum. We got there an hour before closing and had just enough time to see the Water Lilies and quickly peruse the rest of the collection before they closed. We walked home along the Seine and through the Louvre. We also walked along the street we’d driven in on on Thursday because I’d remembered seeing a clothing store that interested me, and there it was, Desigual! But they were closing in just a few minutes and wouldn’t be open again until Tuesday, so I was still shut out on the shopping for today. No matter, I would catch up!

We had an assortment of fast food for dinner (Genevieve and I had noodles, Mark had chinese food and Charlotte had a chocolate street crepe). Then the desserts we bought earlier. And of course wine!