Time to leave Provence, so sad. Donal called and we confirmed that we would be out by 10:00 when the cleaners were due to arrive. Mark 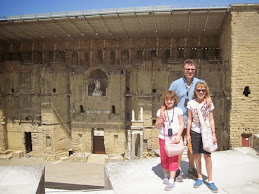 went to get the car and pulled up in front of the apartment right at 10:00, and I think the next guests were waiting to drop luggage as we left. Wallace took us to Orange so we could see the Roman theater there with one of the few remaining theater backstops. Pretty impressive, and there are the ruins of a temple next door and probably lots more still waiting to be excavated. What was not so impressive was the lunch choices in Orange. A very sleepy town, not much was around or open, so we settled for sandwiches consumed sitting on some planters.

Now for the drive to Lyon. As it was the first Saturday in August there were lots and lots of people on the road trying to get to their holiday destinations. And man, some seriously crazy drivers! We were at the toll booth and the lines were long. There were separate lanes for paying with cash, credit card (American credit cards don’t work in French machines) and also lanes with height restrictions. We got into the correct lane, but others, mostly those with trailers, weren’t so lucky. So what did they do, put on their blinkers and merge safely to the correct lane? No sirree! They backed up, in their rental campers with limited vision, stuffed with bikes and canoes and lord only knows what else, in heavy traffic. They drove perpendicular to the lanes. They went from one side of the freeway to the other. We couldn’t believe it! Fortunately we didn’t see any accidents, but it was anarchy! We made it to Lyon in good time and even to our hotel, the Grand Hôtel des Terreaux (thanks Wallace) where Mark stayed with the car blocking the one lane street while I ran into the hotel and got directions to where he should park. We tossed the luggage (and the kids) out and I went to check in while he went to the garage. 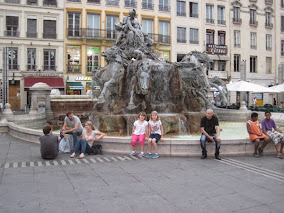 We had two adjoining rooms, very nice. The hotel was being renovated, so if I was the kind of person who was bothered by that sort of thing I might have been annoyed that they hadn’t warned me by email, but as it was I figured it would relax the standards of behavior a bit in a pretty nice hotel. We checked email and freshened up and then hit the town. We saw the Fontaine Bartholdi in the Place des Terreaux very close to our hotel, 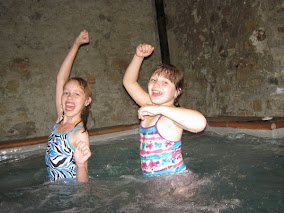 and walked around a bit more, and then it started to rain. We found a street lined with restaurants and set to work finding a bouchon which would serve traditional Lyonnaise cuisine. We succeeded, only to discover we don’t like Lyonnaise cuisine. It is the epitome of what I don’t like, heavy sauces and weird meats. I settled on chicken, but I think they wacked it to pieces with a cleaver leaving no part off, blech. Mark got the traditional sausage which was more like a giant slice of a hot dog. Oh well. Not everyone likes everything!

We returned to our hotel and the kids and I went down to the swimming pool, which is why we had booked this hotel in the first place. What fun. The pool was located in the old wine cellar so it was very unique, and also, well, it was a pool and kids like to swim! And then after swimming Mark and I enjoyed some real peace because they were in another room. Yay!