After we woke up, Mark and I took showers with choice of water temp: scald or ice water. Nothing in between! Made for an interesting 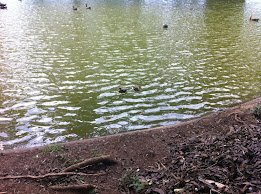 shower. Breakfast was very nice and the hotel was very pretty in daylight, with an open courtyard to the pool and lots of murals everywhere. We had some time after we ate before we had to head out for our Sansa flight to Puerto Jimenez, so we walked around the neighborhood near the hotel. There was a pond with baby ducklings, very cute, and the houses are all very nice. We were able to discover that rent for a three bed two bath were about $1,200 a month. Hmmm, instead of buying a property in Costa Rica and splitting our time with that and the US, maybe it would be better to rent?

We checked out of the Adventure Inn, and took a cab to the Sansa terminal wher 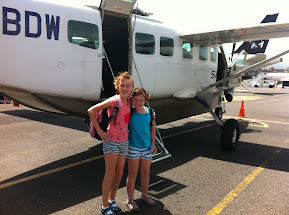 e we were informed that when I called to change our tickets (and pay the change fee!) the lady I talked to only actually changed one and so three of us weren’t booked on the flight. The lady at Sansa actually seemed like she expected me to say “Okay, so sorry, we will come back tomorrow”! But we remained calm and let them slowly sort it out. Because of the kids being small and all they said they could squish us on. And so we took the little plane into Puerto Jimenez. Once there, we hired a taxi driver to take us to Cabinas Jimenez – not thinking it would be so easy to roll our luggage on those dirt roads even though the hotel wasn’t that far away.

At Cabinas Jimenez we got the choice of the rancho that we’d booked or the private bungalow. The kids were very taken with the rancho so we tossed our bags in there and immediately headed out to lunch as it was 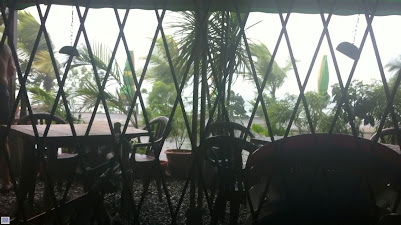 already 2:00. We went to Il Giardino along the promenade, and sat outside and ordered our food. It was really hot – we’d had a really cool start to the summer at home and weren’t at all acclimatized to the heat. But not to worry, a few minutes later it started to rain. And then it started to really rain. And then the wind started to blow. And then the waves started to really pound the sea wall, unmooring boats and pouring over the sidewalk. We moved off the patio, and then deep into the restaurant to avoid the storm. People were running all over trying to secure plants and awnings and rescue a jet ski that was slamming against the sea wall. Through it all, the guy just kept cooking our lunch! It was ready about an hour after we ordered and it was really good. By the time we finished and paid the storm had died down to merely rain, so we were able to walk around the town a bit in search of a grocery store to pick up sodas and snacks. On the way we saw the tail end of a horse parade – there was some kind of festival in Puerto Jimenez that weekend with rides and carnies and everything.

We successfully found the smaller grocery store, bought our stuff, and headed back to our room. Once we got to the rancho, we found the storm had done a number on it, there was sand everywhere on the beds and the roof had leaked in one spot. Fortunately we had not unpacked, so we were able to move to the private bungalow, which Mark and I liked better anyway because it smelled fresher. The kids went into the pool, and then we went to Pizza Mail for dinner.