After we woke up and got the girls up and got them to straighten out their room to the point that housekeeping had a prayer of cleaning it, we went down to check out the breakfast. 15€ per person seemed a little steep so we went in search of a boulangerie for croissants. This was seeming like a colossal mistake, as everything was closed on Sundays until we stumbled upon the market. A huge assortment of every 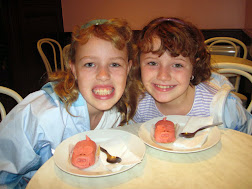 kind of stand you could possibly want. We got pain au chocolat from two different vendors and Mark got paella. No coffee though. Might be a problem.

After breakfast we headed across the bridge towards the Cathedral. On the way we found a delightful patisserie with coffee and really yummy pastries, as well as les coussins de Lyon. We got cappuccinos and the girls got these piggy things and I tried the chocolates. Good but not to die for or anything. I wish I hadn’t been full from breakfast, I would have gotten one of the cream bomb things they had in the window. Never saw anything else as decadent the rest of the trip.

Much fortified, we toured the Cathedral and then went to get the funicular tickets to get up to 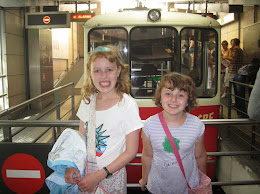 see the Basilica of Notre-Dame de Fourvière. We needed coins to work the ticket machines because our darn non-chip and pin credit cards wouldn’t work in the machines. While at the 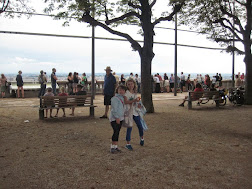 tourist office, we asked about going to the Deportation Museum, only to find out that it was closed for renovation. Darn! The thing I was the most interested in seeing. Oh well. We headed up on the funicular, toured both the upstairs and the downstairs of the basilica, and spent some time looking out over the city. Oh yeah, and also the Tour Metallique, which they put up because they could. Originally it was apparently very cool and popular but now it just looks like the communications tower it is. 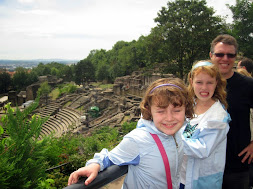 We headed back down the hill towards the roman ruins (of course). These were pretty interesting because they were open and you could walk around them so it was fun to imagine how the city might have been. Genevieve also caught a small lizard – the girl’s got talent (and good reflexes)! We headed along down the hill and saw some interesting abandoned buildings and the old city wall, then realized we were a bit off course but we did find the other funicular to get back down the hill.

We had lunch at a nice restaurant nearer to our hotel, lots of windows which was good as the sun had come out. We returned to the hotel and the girls went to the pool while I supervised from outside and read, and Mark took a nap. We walked around a bit before dinner and then ate at a pizza place, and so to bed.