Another nice breakfast at the hotel, after which the girls and I headed out to go to a clothing store we’d seen the day 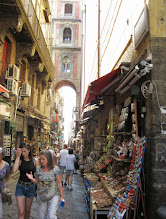 before that hadn’t been open. Genevieve got a shirt and I got two but nothing for Charlotte. Then we returned to the hotel where Mark had deduced the best way to get to Sorrento with our luggage was via hydrofoil, and the one we should take left a little after noon. So we packed up, checked out and left our bags at the front desk and went out to explore. This time we stayed just in the old tourist area and saw all of the miniature shops. We were tempted but couldn’t decide what to get so we got nothing. Headed back to the hotel, took a taxi to the ferry dock and Mark stood in two ticket lines before he finally got the right one.

The hydrofoil took us to Sorrento’s Marino Piccolo in about an hour, and we got a taxi to our hotel, the Rota Suites. 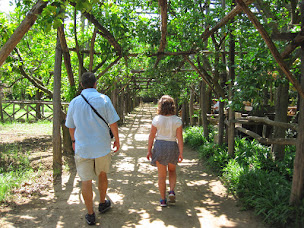 The hotel was nice, the kitchen couldn’t really be called a kitchen but it was two good-sized rooms with a dining table so it 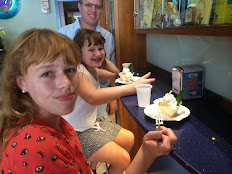 would work.  We could see off in the distance the ocean too, which was nice. We unpacked and then headed out to Sorrento walking through
the Giardini di Cataldo, a lemon grove. We stopped at a bakery thing and the girls got a delizia which is a lemon whipped cream desert, and very yummy. Got some groceries at the grocery store and headed back to the apartment so we could go to the pool at the Grand Hotel Riviera (the passes were included with our stay).

It was a short walk to the hotel, and once there we took the elevator down to the sea access. Nice setup with service, platforms with chairs and stairs down to the water. We all went in and enjoyed how buoyant we were in the salty water and also how warm the water was compared to the Pacific ocean. Then we went up to the pool and played around there for a while.

Back to the apartment where we freshened up and then went to a nice dinner at the Osteria del Buonconvento. Then we walked around and stumbled upon the Corium, a custom sandal shop. We had intended to get sandals made and this place had good styles and a good vibe so the girls and I chose our styles and colors and had a preliminary fitting while Mark surfed the web on his phone outside. It was pretty fun, actually! Then we returned to our apartment down the busy main drag.