Today we woke up, had our final nice breakfast in the hotel buffet, and then walked to the promenade one last time and to Molinard perfume store and museum. It was cool to see how perfume is made but I didn’t really like the styles of their scents so we only bought bath bombs. We also stopped by Benetton where Genevieve got a white dress that made her look like an angel. Then we took a taxi to the crazy busy train station where we wrestled with the machine until we finally got it to print out our pre-booked tickets.  We found our assigned seats and the train departed on time, and only then did we realize we should have spent our time in Nice getting sandwiches for the ride! We ate chocolate and snacks for lunch because that’s all we had. The train kept slowing down and stopping, so that we arrived in Marseilles late and missed our connecting train to Aix. This train station was crazy too and we couldn’t find anyone to ask for help and another train to Aix was leaving in five minutes so we just got on it. They never checked our tickets, which is good because it turns out ours would not have been valid and we would have gotten fined. No matter, we arrived in Aix about a half hour later than we were supposed to and Donal, the landlord for our apartment, was still waiting for us. Whew.

He took us to the place and then showed us where the parking spot was. Wow, what a nice apartment. Really close (like two houses in) 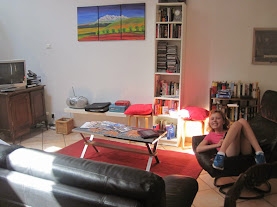 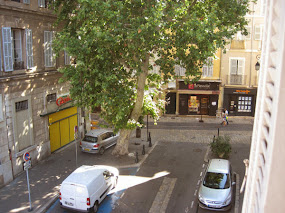 to a street with a minimart (right on the corner) two boulangeries, a fromagerie (cheese shop) and a charcuterie as well as a produce market and several restaurants. The apartment itself was nicely decorated and large, with three bedrooms so the girls could each have their own. We got all of our instructions, then he left and we went to walk around and hit the Monoprix downtown for some supplies. The supermarket part was fascinating, but very time consuming to find anything then try to decipher the label to make sure we were getting the right thing. Then we went to the Boulangerie and the cheese shop La Baratte, where a very helpful French Canadian woman gave us tons of samples to help us pick out just the right cheeses. We took our bags back to the apartment then went out again for dinner. Unfortunately, we were unable to find anything remarkable so wound up at a standard pasta restaurant but the service was good and the food was fine so no matter.