Genevieve woke up early (for her) this morning because she was eager to hit the bakery for some croissants. Also the church bell nearby rings 15 minutes before mass starts and gets ever more urgent with the chimes, which may have been a contributing factor. The bak

ery that Donal recommended was closed so we went to Banette and got our four pain au chocolate. Took them back to the apartment, yummy. Eventually the whole family was up and dressed and so we hit the town of Aix for some more exploring. We started out walking 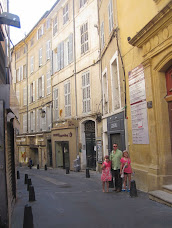 around the Mazarin (the “newer” side of town with the large palaces). Some pretty nice places! Eventually we made it to the Cours Mirabeau, the main street, where what should we find but a wine festival! What luck (the kids were perhaps not as thrilled). After confirming that the glasses were in fact only 3€, we bought two and commenced tasting. There were probably about 40 vendors with about six wines each, so obviously we needed to be a little bit selective. The girls also got to try jelly and 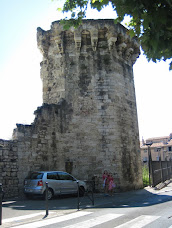 honey and cookies so they were happy. We spent about an hour there, and bought three bottles of wine, which we took back to our apartment. We walked around some more, and found another La Cure Gourmande, where we went in to buy some choupettes. I misunderstood what the lady was telling me about the sale they had and accidentally wound up buying 12 (buy 8 get 4 free I think was the offer). Oh well! For lunch we went to Le Panier a Salades, where I think I had the best salad of my life (and I eat a lot of salad). Two kinds of bacon like stuff, warm dressing, melted goat cheese on bread rounds…mmmm. Mark was not quite so fortunate in his choice, to his surprise he got an assortment of livers on his salad (we looked up EVERYTHING on menus after that) which he was happier about than I would have been. Then we went in search of Mark’s sister Dianne’s apartment in college, which we found. Close by was a section of the old city wall as well as (naturally) the University buildings.

We returned to the apartment where (shockingly) Mark took a nap. This time he slept so long we missed any chance we had of going out to dinner so Genevieve and I hit the streets and even on a Sunday we were able to find some takeout sushi, pasta and parmesan (for Charlotte) and fancy pastries. I really love how everything is so close in Aix. Mark woke up grumpy and hungry but fortunately was mollified by Genevieve’s offer to go out again with him to get pizza by the slice.