We had breakfast at Monka again, Mark just didn’t want to try anyplace else. This time the girls and I headed across the street to the bakery and I found out the hard way the savory turnovers are kept in a different area than the sweet ones. So I wasn’t very fond of my beef turnover when I would have 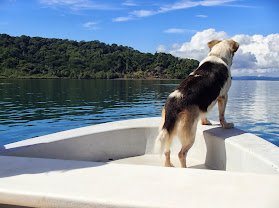 preferred apple, but whatever. We walked out the back of our cabina to where the boat was anchored and loaded up. There were two Italian women and two other Americans, all friends of the boat owner, and a dog on the boat with us. We went first to the swamp area but it was getting on low tide and we nearly got stuck so we headed out of there pretty fast and went across the gulf to the Osa Wildlife Sanctuary. This is only accessible by boat, and the lady that runs it takes in animals hurt because of misguided people trying to own them as pets as well as injured and orphaned wildlife. Did you know if a baby 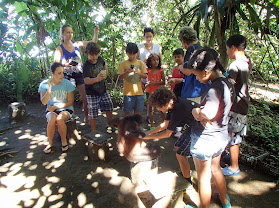 sloth falls off its mother that’s it, the mom is not physically able to pick it up and put it back on her? So if there is no human nearby to do it for them then the sloth will either die or spend its life in captivity, because it’s mom also teaches it which very specific trees to eat from and it will follow that same circuit the rest of its life.  We waded off the boat when we reached the sanctuary and the rest of the boat tour went on to find dolphins. On our tour was also a private school group from Puerto Jimenez. It was fun seeing all of the animals and especially fun seeing the Costa Rican kids with them. At one point Carol, the owner, was explaining that the macaw was strong enough to bite off your finger in one bite. And then she asked “does anyone want to feed her?”. Usually of course at this point everyone would be silent but one girl shouted “me! me!” Pretty funny.

After the tour we rejoined our boat group, and unfortunately they had not located any dolphins so we went to the snorkeling spot. The water was really murky and you couldn’t see much. It was so murky in fact that I started to get motion sick because I couldn’t see that I was bobbing in the waves as I was trying to snorkel. I also cut my foot on coral – I had opted not to use fins because we hadn’t brought ours and I was too lazy to try to find a pair that fit, but I guess they’re not only to help you swim, they are also for protection. 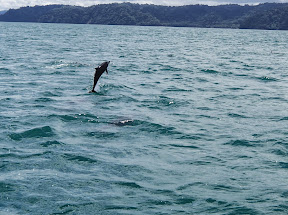 started back for Puerto Jimenez when the other guy who was looking back along the gulf with binoculars spotted them. We turned around and got right in the middle of a pod of neotropical dolphins. Man, what a sight! The dolphins were having a wonderful time, jumping and spinning and checking us out (especially the dog at the 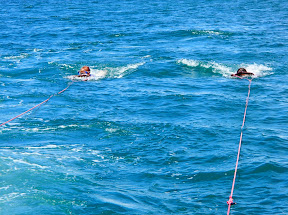 prow of the boat). You can see the video here, really incredible. Then they offered to let us take the plane boards and get towed by the boat and go under water with the dolphins. Mark and Genevieve went first and they had a dolphin swimming right under them and also could hear all kinds of clicks and whistles. Next Charlotte and I went, unfortunately we were not as lucky and could only hear, but not see, the dolphins as they’d moved away a bit. Finally the two Americans went. I’m guessing the Italians couldn’t swim because they never went in the water.

After enjoying the dolphins for a long while we headed back to Puerto Jimenez where we saw a couple dolphins of a different type. We went to the dock because it was now low tide and sat in the back of a pickup back to the cabina. That was an experience for the girls they’ll never get in the States either!

We had lunch at Mariscos, which was good but the ceviche was not as good as Carolinas, go figure. Then the girls played in the pool for a while and also played with the black kitten that belonged to the hotel.  And then it was time for dinner. We went to Pizza Mail and realized that the woman who runs it is the person who was on the boat with us! We had some really good food, the spaghetti carbonara was very good in particular.

And finally we saw the table of the Fodor’s people who had met there for dinner just a little while after us. We introduced ourselves and said we’d see them tomorrow at Bosque del Cabo!