Charlotte and I got up early to go to Jagua Arts and Crafts. On the way we saw this cool tree with a bunch 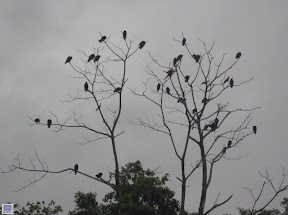 of vultures in it. And a pair of macaws. And a toucan. (Three of these things are not like the others…) We made it to the store shortly after it opened (and it was already hot and stuffy inside the store, can’t imagine what it’s like later) and got one of the wood carvings they make. Usually there would be a face but we got one with only animals, better for our cabin decor! And a few jewelry boxes and earrings. Then we walked to the bank where we got more money and back through the center of town. Met up with the rest of the family and had our last breakfast at Monka after we mostly packed. Got back to Cabinas Jimenez and the cab driver was waiting for us because it was supposed to rain and he wanted to get to Bosque del Cabo while he could still ford the streams.  We got ready as soon as we could, and headed out. 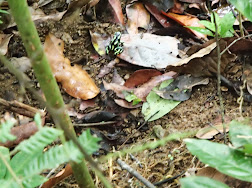 The road was so much better than I remembered! They have spent a lot of time packing down the dirt with steamrollers so it’s pretty smooth now. We got to Bosque and had our welcome drink and then got shown to our cabina, Tucan. Pretty much as we remembered! We went on the little hike behind the restaurant before lunch where we saw lots of poison dart frogs. Nice lunch (as usual) and then we hiked the Titi trail where we didn’t see much of anything. Right before dinner we signed up for a night hike with Phillip, the resident biologist (as an aside, how nice to have someone always there to answer all your animal questions. Phillip was available at breakfast, lunch and dinner, and around a lot of the rest of the time too, so we never had to wonder about anything for long).  The night hike was good, the most valuable lesson we learned was to hold the flashlight right up to your eye and then animal eyes (and spider eyes) will shine back at you. Never realized how many spiders there were around, could have done without that knowledge! We saw a bunch of frogs and a crab eating raccoon. My favorite frog we heard but did not see was the dink frog that makes a noise that sounds exactly like a metal clip hitting a flagpole such as you might hear on a windy day. And then dinner where we got to spend time with all the other people on the get together. So nice to have built in friends like that!