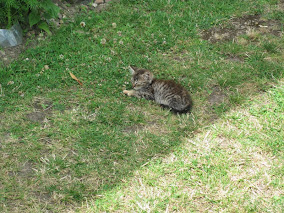 We awoke not to the sound of roosters but of kittens downstairs meowing. Very cute, although two of them look pretty sick so we were worried for them. We had a delightful breakfast of chocolate croissants (we were on a roll with them after all) and yogurt and granola. We took a little walk around the village to see the cute houses and the river Vienne. It really does seem a very pleasant place to live! We had a nice lunch of pizza 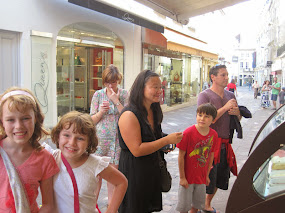 and then headed out to Poitiers. Luckily for us we all fit in Marcus’ car so we didn’t even have to drive! Poitiers is known for its many churches as well as its many macaron/chocolate shops, so we made sure to visit as many of both as possible. We also hung out in the main square while the kids rode the carousel and then played. Lamented once again that “Free Wifi” in France is not in fact free, but a service you have to pay for. I think they are a little unclear on the concept…

Finally it was time for dinner at Marcus and Susie’s favorite restaurant, Bistrot du 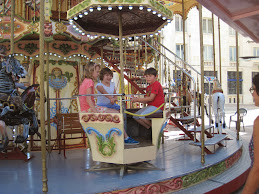 Boucher. Here I ordered escargot, and it came in a cream sauce in a little ceramic dish like you would get crème brulee in. I wanted the girls to try it but they were having none of it. I really didn’t want them to leave France without trying this dish, so I paid Charlotte 5€ to give one a try, and for Genevieve I offered to pay for the pencil bag she’d just bought instead of it coming out of her pocket. They both tried them and didn’t gag or anything, so mission 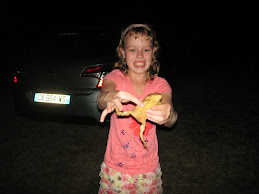 accomplished. The escargot were actually quite good but they tasted and looked like mushrooms so I think in the future I will just stick to mushrooms. The rest of the dinner was very good as well! We then headed back home and when we pulled into Marcus and Susie’s drive what should the headlights illuminate but a toad! Genevieve and I hopped out of the car before it even stopped moving and grabbed him. None of them had ever held a toad before and were surprised and its bumpy, rough and not-at-all slimy skin. We released the toad and headed off to bed. What a nice day!