Kittens were up early again. Susie was concerned about the two little ones as well so she gave them worming medicine. Genevieve and I walked across to the little store and got cheese and bread for our “pique nique” lunch because we knew Charlotte wouldn’t go for tuna. We called out to the sheep in the neighboring pasture and they ran at the fence like they were going to knock it over! Yikes. Guess they’re not quite as friendly as the ones in petting zoos.

When we were all ready we headed off in the car for Futuroscope. My strange kids had no interest in Euro Disney but they did want to visit 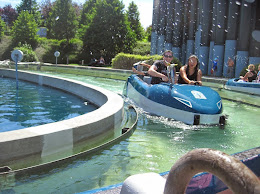 this uniquely French amusement park. The Wrights are members so we were able to use member services to get our tickets and save some time that way. We got there right at lunch time so we went to the pique nique area (I had no idea they spelled it that way) and hod our bread/cheese/fruit/sandwiches. Then we rode those big bile things with floaty tires, and also the kids played on the giant rope climbing thing. Then we went on the boat ride where you try to shoot targets with a water gun. Someone at the front of the line didn’t realize that you were supposed to put your foot on the gas to power the boat so they went through super slow which caused a major boat backup and left us all sitting ducks for the squirt guns of our neighbors. But such fun! I was laughing so hard. Fortunately it was warm enough that being drenched didn’t matter. We watched the magic show, then took in some of the movie/ride things Futuroscope is known for, 4D things where the floor moves, etc. One cute one was a promotion for the Vienne area, where a guy almost misses his own wedding and has to steal a race car to get there in time. And then there 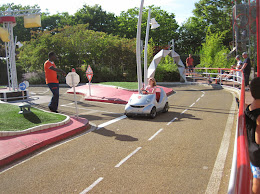 was the Little Prince that was really well done. And who can forget the prehistoric story of 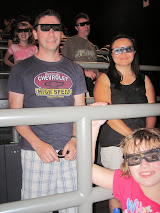 Dolly Dolly and Dolly Boy! That one was so bad it was funny and we threatened to name our kittens Dolly Dolly and Dolly Boy when we got home – Genevieve was not amused. Genevieve, Charlotte and Matthew also tried their hand at a driving course with little cars. This was hilarious because the adults supervising the ride actually scold the children if they break a traffic law. Genevieve got read the riot act twice in French for failing to make a complete stop at a stop sign. Hey, what can she say, she’s from California after all! There were also lots of little rides and playground things the kids enjoyed. It’s a very nice low key park, and even though Marcus and Susie said it was the most crowded they’d ever seen it, it wasn’t bad. We left there pretty late, after 7:00, and then went to find dinner. We wound up at La Boucherie, which was pretty good so if you find yourself in France looking for a chain restaurant, choose that over the Courtepaille for sure. Once home we were all pretty beat so we went to bed.