Woke up to kittens again. In case you are concerned, Susie reports that their health did improve and they are happy cattens now. We had a last nice breakfast, and I looked at my directions for getting to the apartment and saw a line that had somehow escaped my attention previously “at least seven days before your arrival, please contact our leasing company to arrange getting the keys” Oh no. Marcus (with 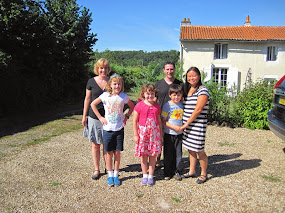 his ability to speak French) called the number and got voice mail. Then the guy called back and said he was on vacation and to call his partner. Voice mail again. We left a message and also sent email and hoped for the best. We said goodbye to Marcus, Susie and Matthew. What great hospitality! We hope they can come to California so we can return the favor.

Got on the road and drove, stopped for lunch at a rest stop (which have restaurants and gas stations in France) and used the REAL free wifi to see if there was an email from the guy, no luck. We got into Paris and found a parking garage near to the apartment and walked to the apartment close to the time we left on the email and message that we would be there. Nobody there to meet us. Waited a half hour, nobody there. Wondered what we were going to do, and then finally, the guy showed up. Whew! Not too bad of a disaster. We got the keys to our third floor walk up, wow, what a nice place! And in the heart of Paris, in the 2nd arrondissement, right close to the Bourse, tons of restaurants, and walking distance to many tourist destinations. The entrance was in one of the passageways too, which was cool. We got the lowdown, got ourselves logged into the Wifi using the incredibly long password, and got settled in. Unfortunately this was one of those places where I was supposed to make the beds and I was so tired I really didn’t want to just yet.

We needed to retrieve the car from the garage and return it to the car rental which was located in the Gare du Nord train station. We drove to the train station no problem but then couldn’t find a rental return of any kind so we circled back and got ourselves into the strangest area. Men men and more men, very very few women, all standing around and shopping and stuff (Arabic I’m guessing, it was creepy to see so many men and no women like that). Super slow moving traffic. It was like a different city and so abruptly too. We did eventually get reoriented to circle back and this time decided to drive into the parking garage to get oriented which was a good call because that’s where the rental return was. Immensely small parking spaces but we got the car in without a scratch and went upstairs where they took the keys without even looking to make sure we’d filled up the tank (we had).

We walked back the way we’d came and stopped a little neighborhood joint for dinner. The food was okay, but no wine (Arabic I’m guessing although we were out of that neighborhood). We walked home and Mark went to the Monop (a mini Monoprix) to get wine while I made the beds. Told the kids they were on their own after I made them, it was their responsibility to make their own beds and it was likely not going to be easy as I had to use a flat, not fitted, sheet on the mattress. The beds turned out to be super comfortable at least, and the wine made up for the housework!