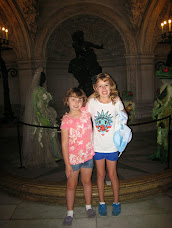 After a long night and not much sleep, I was not sure I was up for a trip to the Louvre, which was good because it turns out it’s not open on Tuesdays anyway! We decided to have a slow morning (toast for breakfast for me which stayed down just fine) and then we went to visit the Opera House. Gorgeous on the outside! There was a bit of a line, and we were amused by the group of old French ladies who were so proud they managed to maneuver themselves in front of us in the line when the girls got distracted. Hey, when you cut in line you’re not clever, you’re just a jerk! We got to the front of the line, and then the ticket system went down. Nobody knew what to do! They called the IT big guns in from the back office, and we lost about 5 minutes as they properly greeted each other with the two kisses on the cheek. Then they got to work, but no luck. Finally they decided to go with paper tickets, and there was another delay while they located the stamps and ink pads. But about 20 minutes later everything was settled and they were good to go. We got in and walked around. Really enjoyed seeing all of the costumes and the building of course is very nice. 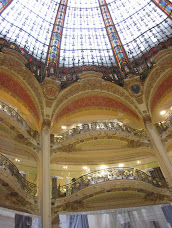 beautiful inside. Next door is the food hall where we got some food, pastries, and other yummy stuff. We took our food back to the apartment, where I ate some and then laid down until I felt better. Next up, 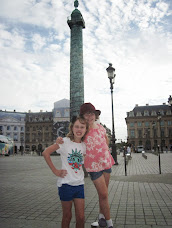 Desigual, the store I wanted to visit on Saturday but they were closing. We went in and all went to town, spending over 600€! Charlotte also got one of her shirts personalized, which was a fun thing for her. I think it’s funny that two of our favorite stores in Paris are actually from Spain! We walked to the famous square, the Place Vendôme, where there are a lot of high end boutiques as well as the Vendome column which was erected by Napolean and looks like Trajan’s Column in Rome. We then found a cafe to enjoy a drink in true Parisian style. I still think it’s funny the way they face the chairs all to the street. It’s like your dining companions aren’t possibly as interesting as what’s going on outside.

We dropped the bags back at the apartment, and then went to dinner at Pasta Papa, which was a casual pasta restaurant with lots of choices. Very nice! And then we returned to the apartment and sleep.