Today we woke up early so we would be ready for our morning tour of Finca Kobo and went to Monka for breakfast as the guy at Cabinas Jimenez recommended it as being quick and close. It was as advertised, and after breakfast we headed back to our hotel where the owner met us and told us that Finca Kobo had called and cancelled our morning tour and rescheduled us for the afternoon due to the lingering rain. Bummer. The girls and I went to the mud flat in front of the hotel to look for critters and of course it stopped raining soon after. We saw a few crabs but nothing really interesting until the macaws flew in. We followed the considerable noise they were making until we found them and watched them for a bit. There were also some sensitive plants nearby so we played with them as well. Then the girls wanted to play in the pool for a while which they enjoyed.

After a while we met up with Mark back at the cabina and went to lunch at Carolina’s. Mark and Genevieve had the ceviche which was good, I had a hamburger which was so terrible and Charlotte had fettucini alfredo that they put ham on so she wouldn’t eat it. Sorry Carolina’s, you don’t get our vote! 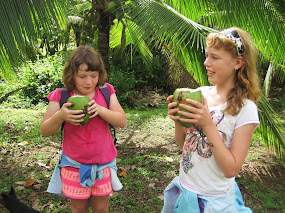 We got back to the cabina and then our taxi was waiting to take us to Finca Kobo. We arrived and our tour guide, Alex (who is also the son of the owner and the one who is responsible for running the place) was waiting and greeted us. He led us on a tour 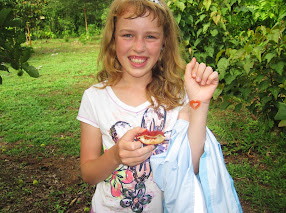 through the grounds where there were so many fruit trees and herbs we got to learn about and sample. He also gave us coconut water and we got to eat the fresh coconut and then what we didn’t want the dogs got to have–apparently all dogs love fresh coconut (who knew?). We got over to the pineapple plants and he harvested a perfectly ripe so delicious white pineapple which we devoured so he cut down another one.  And the girls had fun with these seed pots that made face paint. 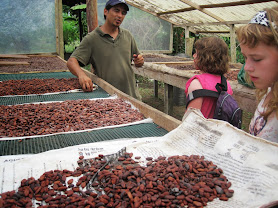 Then we got to the cacao and he explained how it grew and gave us a sample of a fresh bean. And they showed us how they stew them and then they dry them and then they roast them. I didn’t realize cacao tasted so good just straight, I thought it would be like cocoa powder but it was more like baking chocolate. And last but not least we had a chocolate fondue feast – 90% cacao fondue, all the fresh fruits from the farm to dip it into and flourless chocolate cake! It was more chocolate than we could eat and believe me, that usually doesn’t happen in our family! We were in the best moods the rest of the day, whether that was due to the chocolate or the excellent tour, who can say?!

When we got back to the cabina the kids went in the pool and we went to Juanita’s for dinner where we were the only people in there, probably because it was a Monday. The food was good but they put sour cream (that is a lot like mayo, I’m not so sure it’s not mayo) on Charlotte’s quesadilla so she refused to eat it. We’re trying desperately to get her to be more flexible and so we didn’t send it back and in fact denied there was a problem when the server asked but the chef could see our table and Charlotte’s distress and cooked her up a plain quesadilla anyway. Nice!