Fourth of July! Besides the smattering of red white and blue shirts in the dining room at breakfast you’d never know it. Leaving the Westin, so sad, truly a nice place. Service and facilities and food everywhere but the buffet is truly top notch. 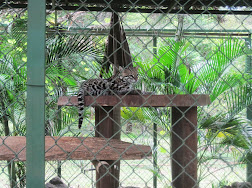 Got the car and headed out. We stopped at Monkey Park along the way, another animal rescue organization. This time there were Canadian young adult volunteers we could talk to, and Genevieve agrees this would be a great place to spend a summer one year while she’s in college. We were especially taken with the beautiful ocelot, man those are pretty cats.

Headed back out and passed a lot of restaurants near the Liberia airport, but we weren’t hungry yet. Mark kind of wondered if we were making a mistake…Well, a little. We turned off the highway when the GPS said and went through a little town called Cañas and then started heading out into the middle of nowhere. So we wisely circled back and had a quite good pizza at this little place called Tsunami. The GPS took us around Lake Tilaran, which I guess was the quickest way but it’s a large lake and took a while to get around. Along the way we saw so many signs for Toad Hall that I really wanted to stop but the sticks in the mu 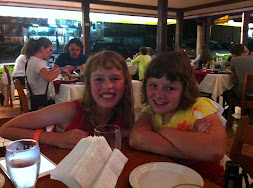 d I call a family didn’t want to. And then about 20 minutes later we had to pull over anyway because Charlotte was getting carsick. See, told ya we should have stopped at Toad Hall!

We made it to Los Lagos without further challenges and checked into our room. This time we were on the wing closer to the pool so we could walk instead of always having to take the shuttle. The place was a bit of a downer after the plush Westin, but at Los Lagos it’s all about the pools. We headed out for a dip and then cleaned up for an overpriced, slow dinner at Las Brasitas.