Canada Day! No celebrations at the lodge though. The girls and I got up early because some people had been seeing peccaries on the Titi trail in the morning. We were having no luck and then Genevieve 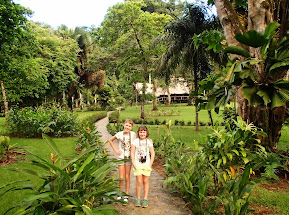 looked back on the trail and saw a single peccary, but unfortunately it was gone before Charlotte and I could see it. After breakfast Genevieve and I took one last hike through the tropical gardens where we saw baby coatis. And I heard a noise overhead, turned up to focus the binoculars on it and right into focus pops a little head of a baby spider monkey looking straight down at me. Man, I am going to miss this place!

It started to rain as we were packing up. The Bosque guys came to help us with our stuff and then we loaded it all onto the truck (luggage in garbage bags) and we headed down to Puerto Jimenez. Once we got off the cape the rain stopped. We checked into our Sansa flight to San Jose and then went in search of food. Found a soda close by but it was so slow, we barely had time to eat before it was time to get on the plane. Once in San Jose we had to check in again for Liberia and we watched a fine Telenovela on the tv while we waited for that flight. Boarded up, same pilot and copilot, an older guy and a really young woman, nice to see. She landed the plane fine in Liberia, I think it was her first time at that airport as she was getting lots of instruction. Huge airport, nobody there! It was dark and a little creepy because we were the only flight in, but there was a help desk person who called the rental car to send a shuttle. We picked up our Budget rental car, fired up the GPS and headed out to Playa Conchal.

Unfortunately it was raining again so that made the drive a little harder but the entire road is paved now which is nice. We got to the Westin Playa Conchal, wow, really nice place! Everyone was so friendly. They greeted us with a drink, explained how it worked (that everything, including the mini bar and room service was all inclusive). And we were very much looking forward to hot showers! We got cleaned up, so nice, and then went to the buffet restaurant for dinner. Blech. They were serving traditional Costa Rican food which may or may not have been authentic but it was all this stew kind of stuff that I just don’t like. Definitely making those restaurant reservations for the rest of the dinners! When we got back to the room, the kids ordered room service deserts, because they could, and those were very good.