After breakfast we had arranged to hike down the Golfo Dulce trail to the Cabo Matapalo, where they would send a jeep (to the white gate which is not a gate nor is it white, but whatever) to come get us before lunch. We started on the trail and finally saw the howler monkeys we’d been hearing. We were hoping to also see the squirrel monkeys but no luck there. A skunk walked right up to Charlotte and then wandered back away. And eagle eyed Genevieve spotted some Golfo Dulce dart frogs, so she was happy. This was my favorite trail, it felt more wildernessy than the others, even a bit overgrown in spots. We 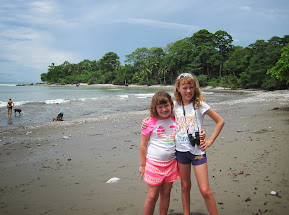 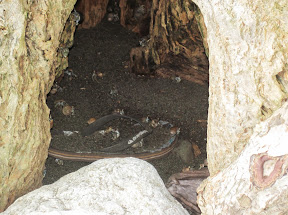 happens if you don’t keep up with your landscaping – there was one patch you could tell had been a garden at one time but the flowering vines had just taken over. We got to the beach as Phil, the owner, was arriving to surf. He told us where the best swimming area was and so we headed off there. Man, there were so many hermit crabs. The beach was crawling with them. The larger ones were farther away from the water, all living inside a hollow tree. The girls and I went swimming while Mark hung out. The water was so nice and warm, it was fun to bob in the waves like corks.

We had to leave to meet the jeep all too soon, we should have scheduled more time for the swimming! Got back and took quick showers to get the sand off and then enjoyed our last lunch at Bosque del Cabo. After lunch Genevieve and I headed down to the Pacific trail at low tide. We were intending to go to the waterfall but we got too lazy – walking on the rocks and sand was tough and we were tired already from the morning hike. So we went back to the “hot tub” area where the waves had carved pools out of 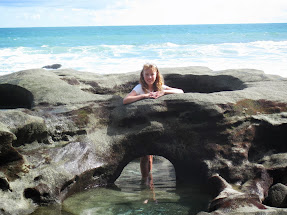 the rock, and I really wished we had brought our swimsuits! Genevieve struck up a conversation with the girl we’d seen at lunch who appeared to be her age. Indeed she was, a very cool girl named Lucy from New York City also going into seventh grade. They chattered happily away while I talked to her Mom and Dad. Just a very nice family (there was a boy too) all the way around, traveled a lot with their kids just like us, seemed very similar in values, too bad they arrived the day before we left!

We all hiked up the Pacific Trail and at the top we saw monkeys. We watched them for a while and then the boy said “what are you guys going to do, watch 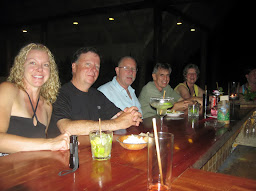 those monkeys all day?” Well, kinda, yeah. Anyhow, we went back and Charlotte and Genevieve headed out to the pool. Genevieve had become very attached to the dart frogs that hung out behind the bar, even naming them. We cleaned up and then met up with the Fodors people for our big happy hour. Not that we hadn’t been gathering every night anyway but this was the official gathering and very nice.

It got closer to dinner, and Genevieve wanted to see them blow the conch. Lucy and her brother Sean 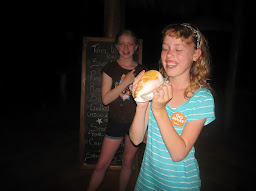 were already there so they asked for a demonstration and the guy let them try to do it. Only Lucy was able to get it to make any kind of noise, but of course the guy was much better!

At dinner we broke protocol and asked to be seated with the family instead of the Fodors people which caused some consternation but they eventually worked it out. Not that I didn’t like the Fodors people but I felt the girls had put up with our grownup boring conversation for three nights already, it was time to throw them a bone! We had a delightful evening, after a wonderful day and a perfect stay.