Today we’d scheduled the Best of Pompeii tour with Walks of Italy, and we were to be at the Pompeii ticket office by 11:00. I had a bit of a challenge this morning trying to make coffee. There wasn’t a french press or an American coffee maker in the 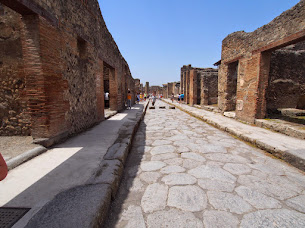 apartment, just one of those little stovetop Italian espresso makers. I thought maybe I could use the coffee bags designed for pod coffee makers in regular hot water but the result was vile.  Oh well. The rest of the family got up, had breakfast, put on sunscreen and a hat and we walked to the Circumvesuviana train station, where we purchased the round trip tickets we needed. Got to Pompeii in plenty of time, so I was able to stop by one of the restaurants for a coffee. She misunderstood what I was asking for (I wanted American coffee) and I got a shot of espresso instead but it worked well enough as a caffeine delivery mechanism. 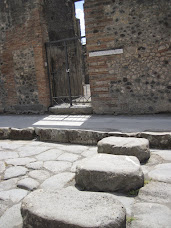 We met our tour guide and the other three people on the tour, a couple from Sunnyvale and a Eastern European woman. Our guide was really knowledgeable and it was great being in a small group because she could tailor the tour to our interests and also answer our random questions. Genevieve also liked that the guide was concerned that Genevieve could be mistaken for an 18 year old and they’d think she was trying to cheat using a kid ticket! Things I learned I didn’t know before: 1) most people were able to escape. Even 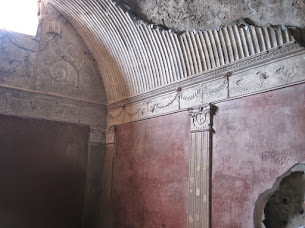 walking you could get out in time, so the only people left in the city (who all died) were slaves left behind to guard houses and those who were unable to travel due to illness, pregnancy, etc., 2) the streets were basically an open sewer, so the way you would cross was using raised stepping stones. These were always exactly the same width apart so that the cart wheels could fit through, and 3) the Italian government has decided not to excavate any more of the city because they’re having enough trouble preserving what’s already been unearthed, so they’d rather spend the archaeologists’ time and money on shoring up buildings so they don’t collapse.

We saw a good portion of the city, including the brothel (after she checked with us to make sure it was okay to take the girls there). We explained they’d already seen the paraphernalia in Napoli and she was surprised, apparently you used to have to be 14 to see it. She said goodbye to our group in the Forum, and we went to have lunch in their restaurant. That was pretty stressful, the guy behind the salad counter was cranky and yelling at all the customers. Unfortunately we didn’t get what we asked for but we figured we were lucky to get anything at all so we ate it. Genevieve and I, having only gotten side salads instead of lunch salads, were still hungry so I went to see what else there was to eat. In the side we didn’t see there was a bakery/panini counter with a delightful prosciutto/mozzarella/tomato sandwich sold by a very friendly guy, so I got that and it was yummy. 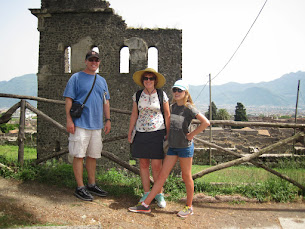 After lunch we went to the back side of Pompeii and saw the tombs that lined the way out of town, and got this nice panoramic view of the site. By now we were really tired so we 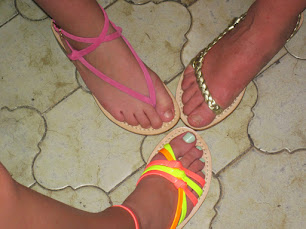 headed back to the train and got to Sorrento an hour later. Stopped by the grocery store again so I could get actual ground coffee to give the espresso maker a try. We rested a bit then went to the ocean/pool. For dinner we went to a casual restaurant right in the center of town. Italy was playing what would turn out to be its final World Cup game and when they lost everyone everywhere got so blue. The whole town was depressed! After dinner we went to have our final fitting and pick up our sandals from Corium. Charlotte had been worried in the morning that she’d ordered the wrong thing but when we got them we were all delighted. We had some gelato and then headed back to the apartment (wearing our new sandals). The atmosphere was so glum it didn’t seem fitting to stay out late!