Today we got up fairly early to go to the Catacombs. The girls wanted to see this because it was listed in their Paris book. We took the metro and then waited in the huge line for over two hours. During that time Mark and Genevieve explored the street market nearby and found a boulangerie where they got pastries. We also went to the nearby McDonald’s to use their restroom and were amused by they McCafe with the McAroons for sale. 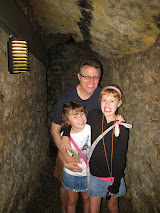 The tour of the catacombs was interesting but a bit creepy of course what with all the bones. I really wonder why they thought this was a good idea, to arrange them in designs and stacks instead of walling them off or something. The catacombs let out really far from where we went in, and if there was a “you are here” sign we sure missed it. But Mark got us reoriented and we went back to where the street market had been but it was all closed up by now. We went to a little creperie called La Belle Ronde that had outdoor seating that was nice enough.

Next we took the train to the D’Orsay Museum. I should say we tried to take the train to the D’Orsay. The part of it through the city was closed (thanks app for not telling me about that) and the bus that was supposed to bridge the gap wasn’t there so we walked the long distance from where the train dropped us off to the D’Orsay. Definitely not worth the price of the ticket! The building architecture of the D’Orsay looked really familiar, but I didn’t figure out until I read a guidebook later that that was because it used to be a train station. Very nice train station too. We saw lots and lots of impressionist art, and stayed until the museum closed.

Then we took the metro back to our apartment where we relaxed until we got dressed up for our dinner at Les Mestruet, a highly rated 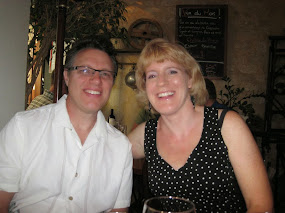 truly French (not tourist French) restaurant that was close by. I tried the Steak Tartare which came with all kinds of sauces as well as a shot of liquor. I don’t really get why people like tartare. It wasn’t gross or anything but I think the meat would have tasted better cooked. I asked the server when he came to clear the plates what you’re supposed to do with that shot. He said you pour it over the meat to make it tender, but that most people leave it to the end and then drink it. He asked what I’d done, what do you know, I didn’t know what to do with it so I left it until the end and then drank it! We also had a great bottle of wine that came in an oddly shaped bottle that looked like a pirate bottle so we took it home. Dessert was fabulous, and it was a really good meal! 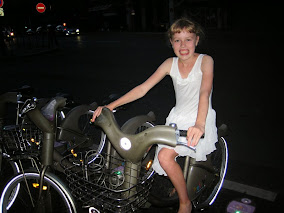 On the way back Genevieve posed on one of the bikes they have for rent around the city. 30€ a year and you can use a bike whenever you want and then leave it locked up for the next person, not cluttering up your apartment. Pretty good deal. She had said that she wouldn’t leave France until she saw a woman riding a bicycle with a baguette, and we were getting pretty desperate for that to happen. We even said I would rent a bike just so I could do it, but of course it wouldn’t take our non-chip and pin cards. Darn US technology. Keep up with the rest of the world, would ya?!