Up early again today, this time to be at the Eiffel Tower for our 10:00 reservation. At the time I made it, 10:00 sounded plenty late but 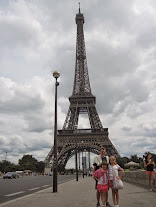 after weeks of 10:00pm bedtimes for the kids and late mornings I knew it was going to be tough to get out of the house by 8:30. But we did it. Took the Metro to our next station where we were supposed to switch lines, but there was a problem with this line (why did I turn off the notifications on my app?) and the trains were arriving so full that nobody could squish in. So we took the train back to another line that also went to the Eiffel Tower and that one was much less crowded. We arrived in plenty of time to get situated. Then we took the timed elevator to the second level and stood in the not very long line to get all the way to the top. Genevieve is flirting with a fear of heights but not giving in to it seems to be working as once she got to the top she was fine. We walked around there for a bit and took lots of photos, had a croissant because we were all hungry, and then took elevator down to the second level where we walked around some more. We thought about having lunch in their restaurant but it was pretty expensive and had a limited menu, so we decided to try our luck at the ground level. We took the stairs down, which were cool. But there was not much on the ground level except snack shacks. We did get a crepe at the stand because this girl that we used to drive to school insisted it was the best crepe she’d ever had. All we can assume is that it was the only crepe she had in Paris because it was actually pretty awful!

There are no restaurants near the Eiffel Tower so we ate in the cafe along the pier where the river cruise departs. Really bad idea. Food 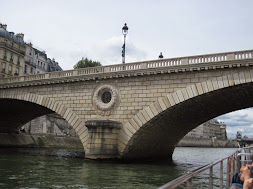 not good, and expensive too. In retrospect, we should have eaten on the tower! (Actually if you walk across the river and through the Jardin du Trocadero there are restaurants there, unfortunately we didn’t realize that). We then got our tickets and went on the cruise of the River Sienne. The girls got to sit on the outside so Genevieve took all of the photos.

When the cruise was done we had some extra time so we walked across the river and let the girls ride the carousel there. A boy was in their car and he spun their chair so fast that Genevieve understood what I was getting at – she was positively green when she got off! We took the metro to the Champs Elysees where we stood in the line to get into the Louis Vuitton store. I had dressed really casually in shorts for the Eiffel Tower so I was feeling very out of place. We got to the scarf area and waited and finally got someone to help us. Once it was our turn the service was great. The lady was very nice when she realized Genevieve was getting this with her own money, and suggested a smaller scarf that could be also worn as a headband. Still cost 95€ though! Her money, I kept reminding myself, and she’s still very happy with her purchase so it was worth it.

Then we returned home and I was starting to feel seriously ill. Oh no! Food poisoning! There is still some debate in whether it was the steak tartare or the bad buffet but my money is on the buffet. I rallied enough to go to Chipotle for dinner (yes, there is a Chipotle in France!). A long night for me but I survived…