We packed up from the apartment, which was a bit trickier than at previous locations because the place was so big I was 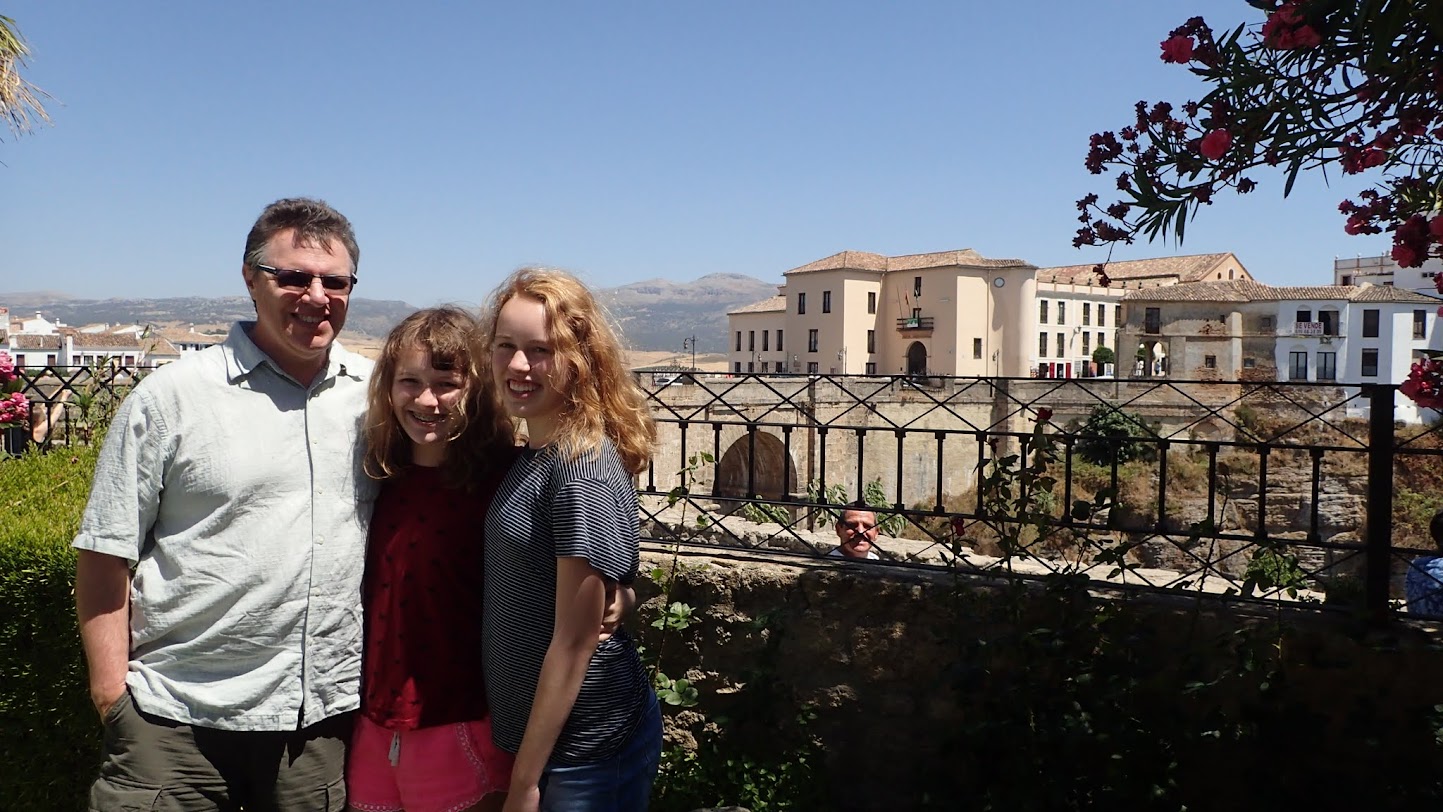 seriously worried we’d forget something. But we didn’t and we headed out to the taxi back to the train station to the car rental. We got our car, big enough to easily fit our luggage, yay! Mark got behind the wheel and drove out to Ronda. Smooth easy drive and we arrived at the Parador in no time. Got the car parked and our rooms were ready to check in, so we did that and then went to the Parador’s restaurant to eat. The food was good but not as outstandin 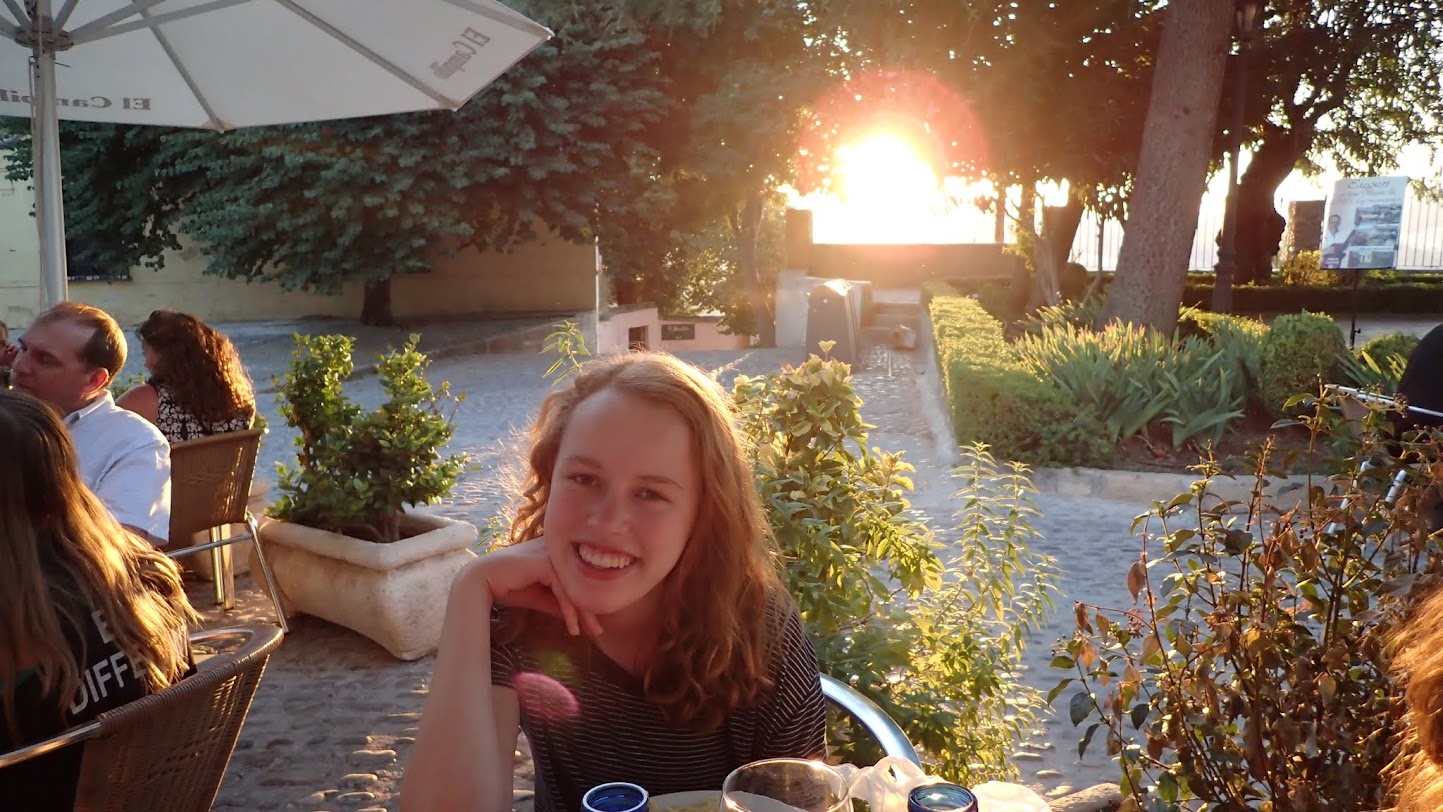 g as I’d remembered the Parador meals to be. I think we’ve become jaded when it comes to good food! 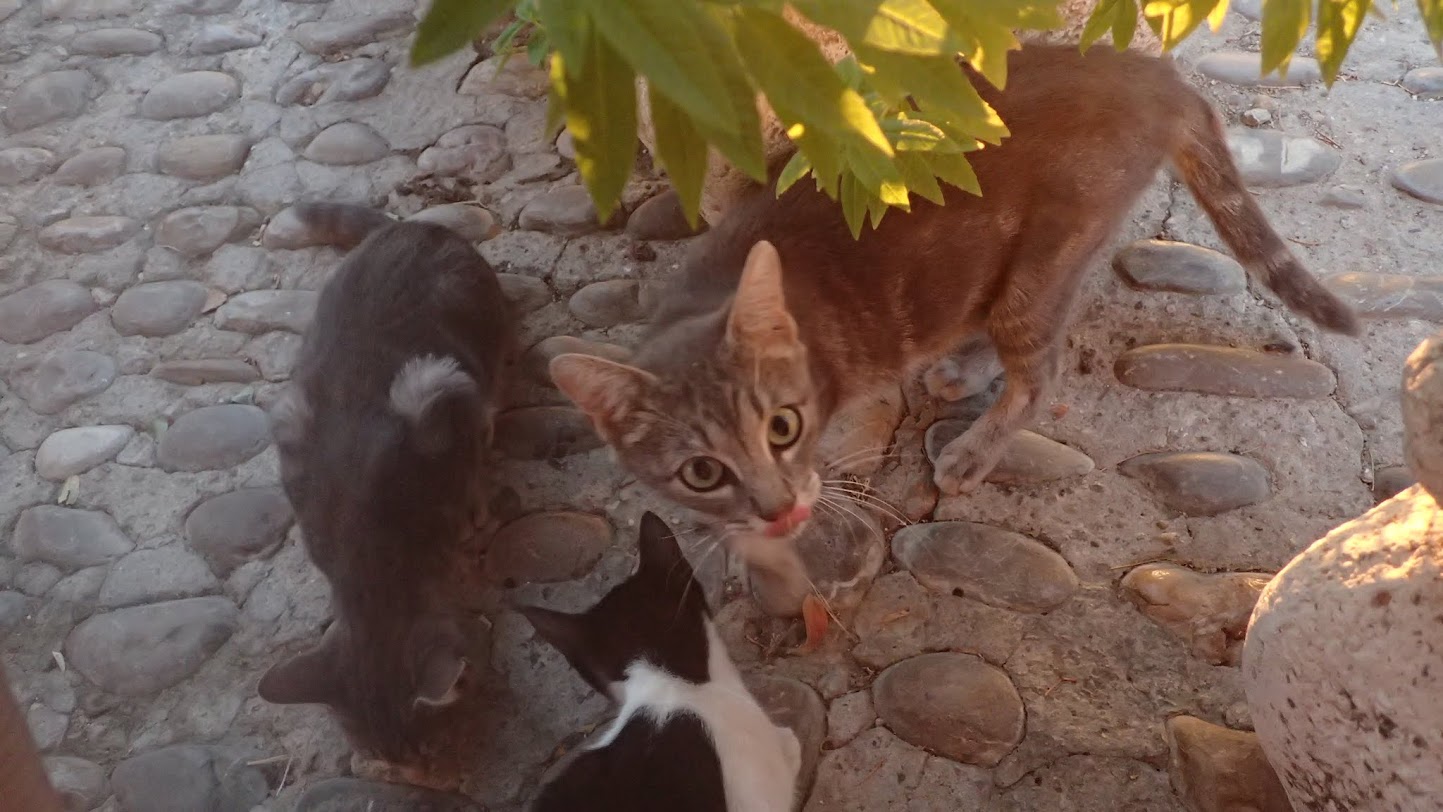 ch we walked around Ronda, then headed back to the Parador to enjoy the pool. The water wasn’t heated (yipes) but it was nice not be hot for a change. For dinner we went to El Campillo because they were near a nice square where we could see the sunset over the valley, (and this is the real reason) they had a big basket of fresh tomatoes displayed that they were serving for dinner. As a bonus, we got to feed all these cute kittens our extra meat! After dinner we just walked around a bit enjoying the view, then we all gathered in the room to watch tv on the iPad using their good Wifi! 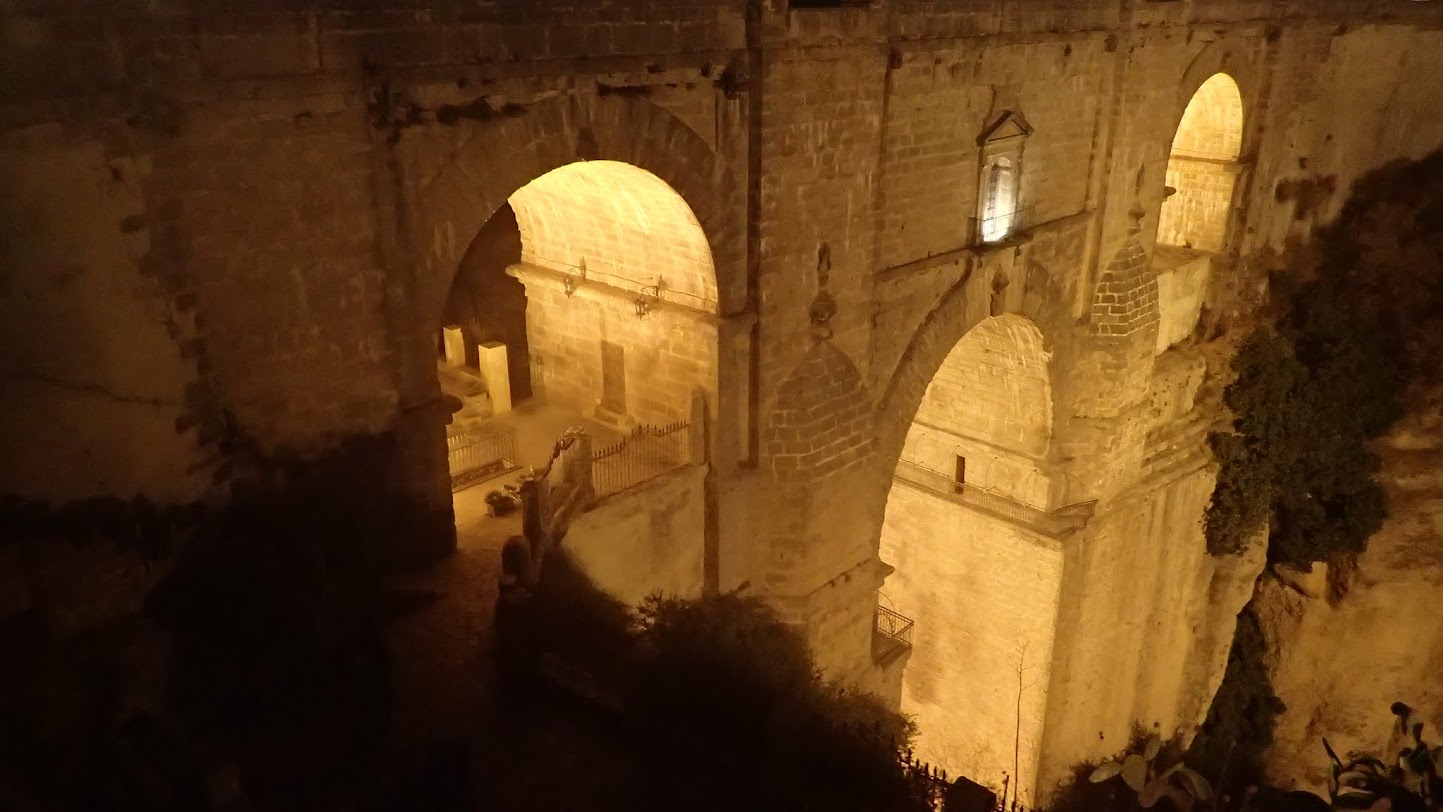 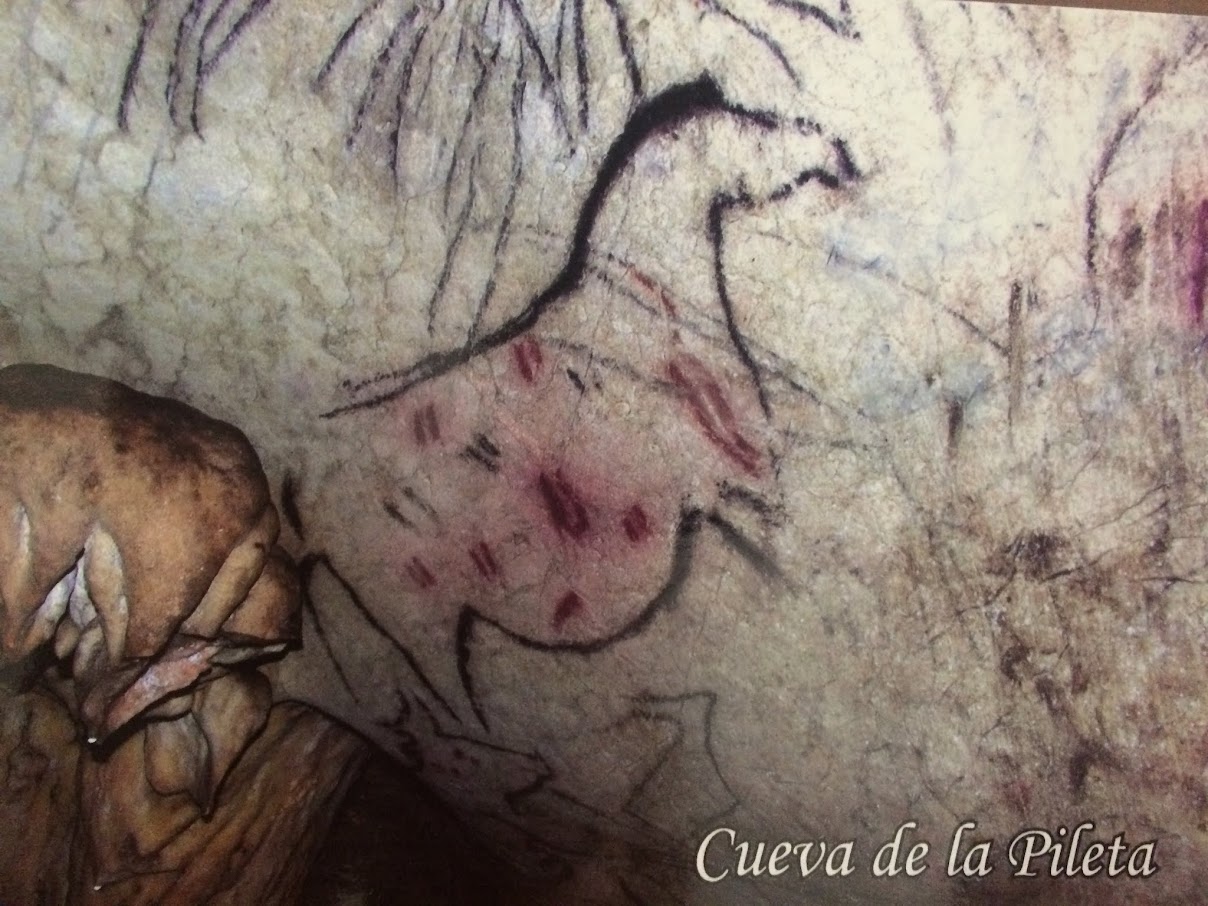 when we’d been to Spain before we 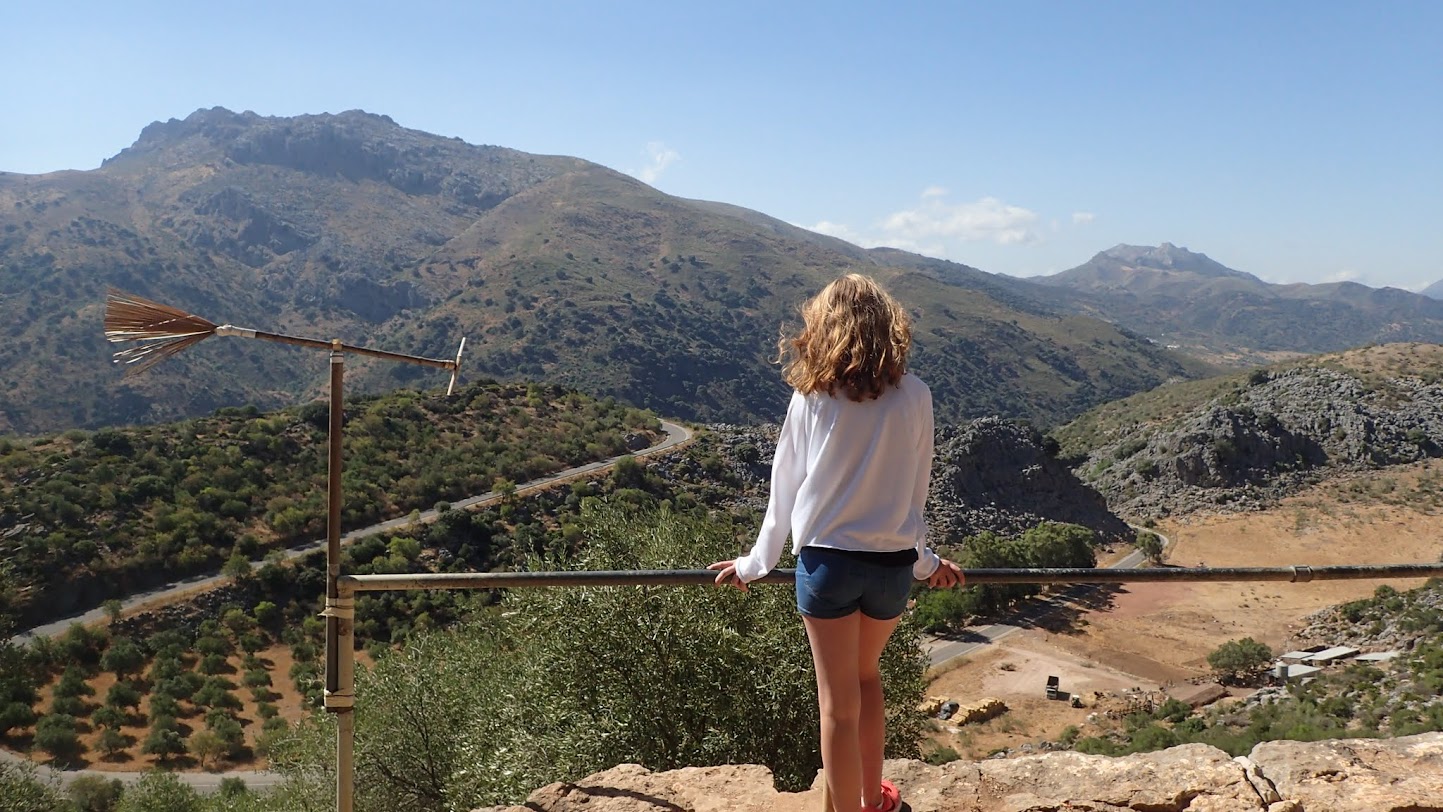 followed Rick Steve’s advice to stay at the Parador in Arcos and when we visited Ronda I felt cheated because the Ronda one was clearly so much better that I swore if I visited Spain again that’s where I was staying) was to see the Cueva la Pileta and the pre-historic cave paintings therein. There aren’t many places where the general public can see the cave paintings, so it felt like a once in a lifetime opportunity for the girls. We got up early, had our fine Parador breakfast, a

nd then headed out to the Cueva. We were the first people there for the first tour of the day, so that was good. Went in, we were all amazed (both by the cave and the paintings, which they now believe are 35,000 years old). Also good views of the valley from the cave. The girls were very glad we came.

Next we drove the long 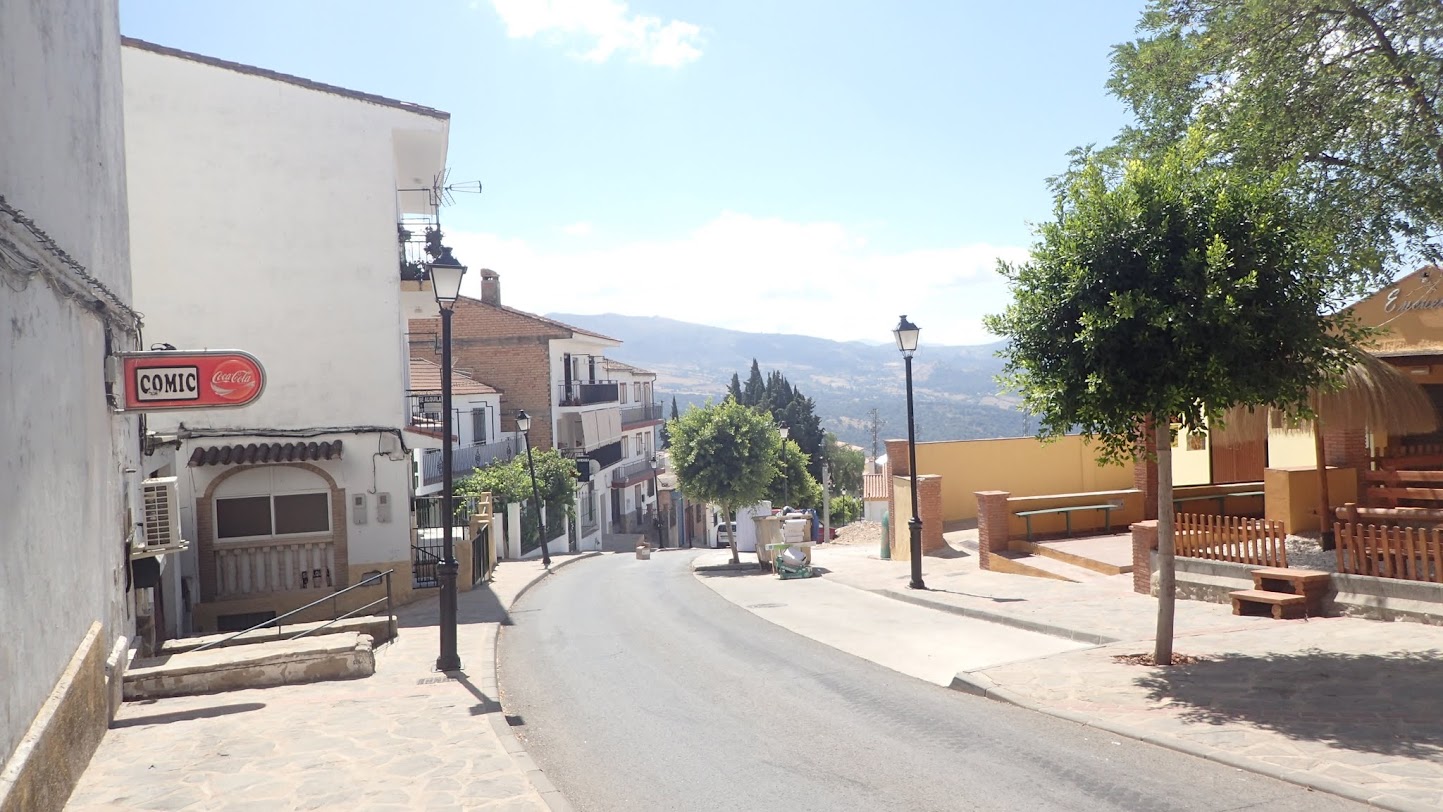 way around in a loop, passing by these goats that just had to stand on their stone wall, for no reason other than they’re mountain goats. Duh. Next we came to the very cute 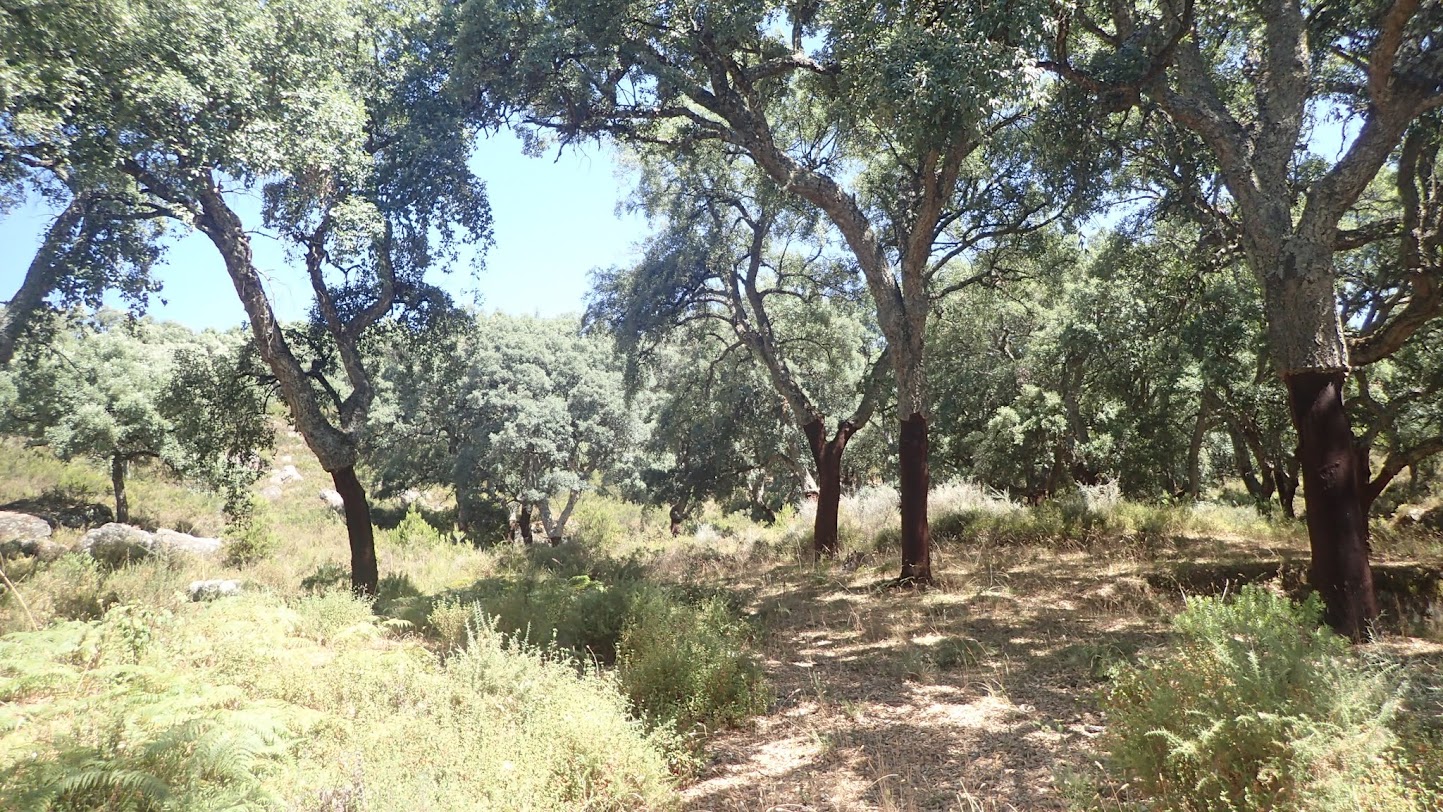 Cedros de la Frontera, a sleepy town on a Sunday. Through a cork forest and then along to Grazelema, where we had lunch at a regular tourist-style restaurant. Walked around the town a little bit, then went to the Payoyo store, because, well, cheese. We bought two different kinds, and then we drove back to the Parador where Charlotte and I went to the pool and Mark and Genevieve went to the bar. That night we went to a pizza restaurant in this alleyway full of restaurants for dinner, and then walked around and enjoyed (again) the beautiful views. 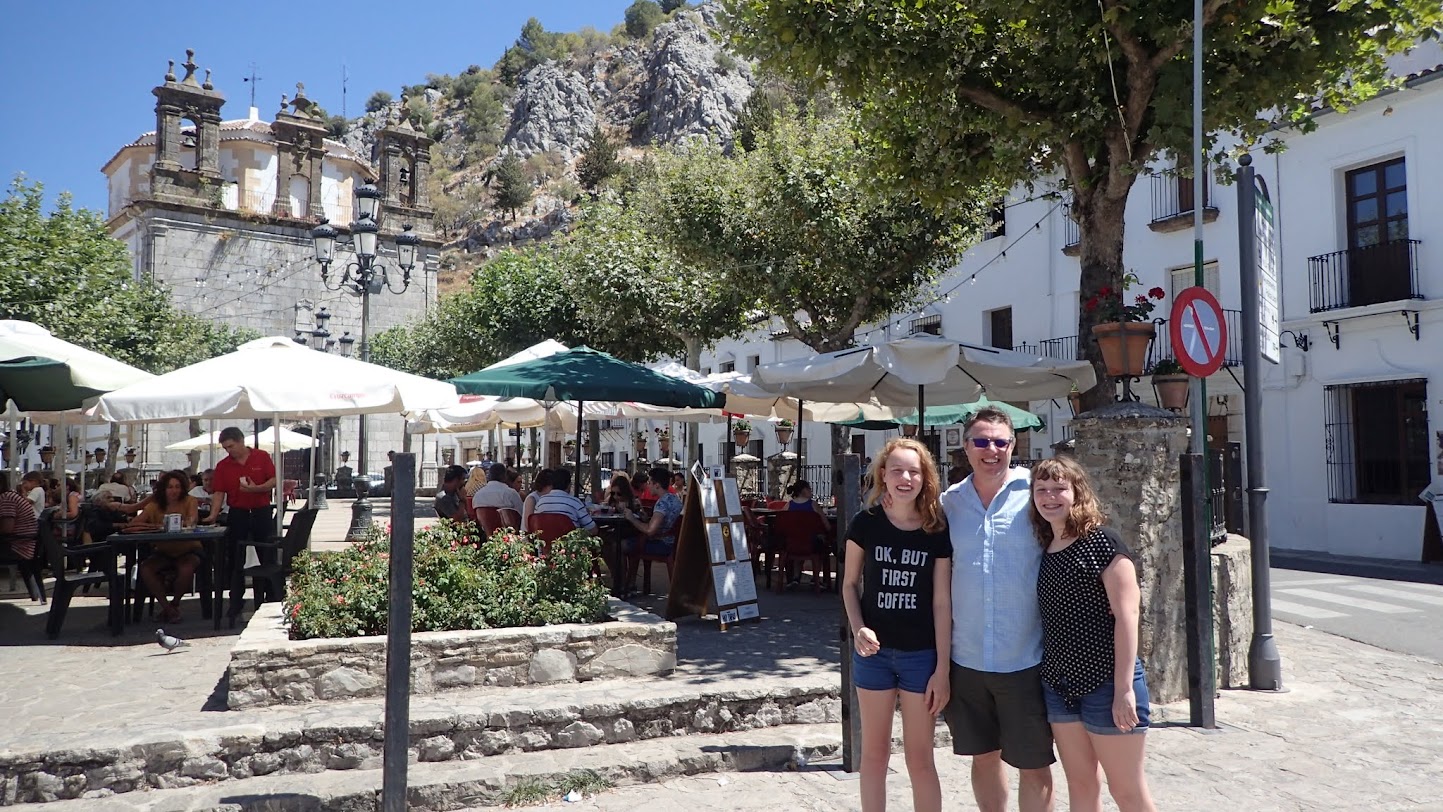 Today we slept in a bit and then headed to breakfast before they shut it down. Next we hiked down the bottom of the gorge 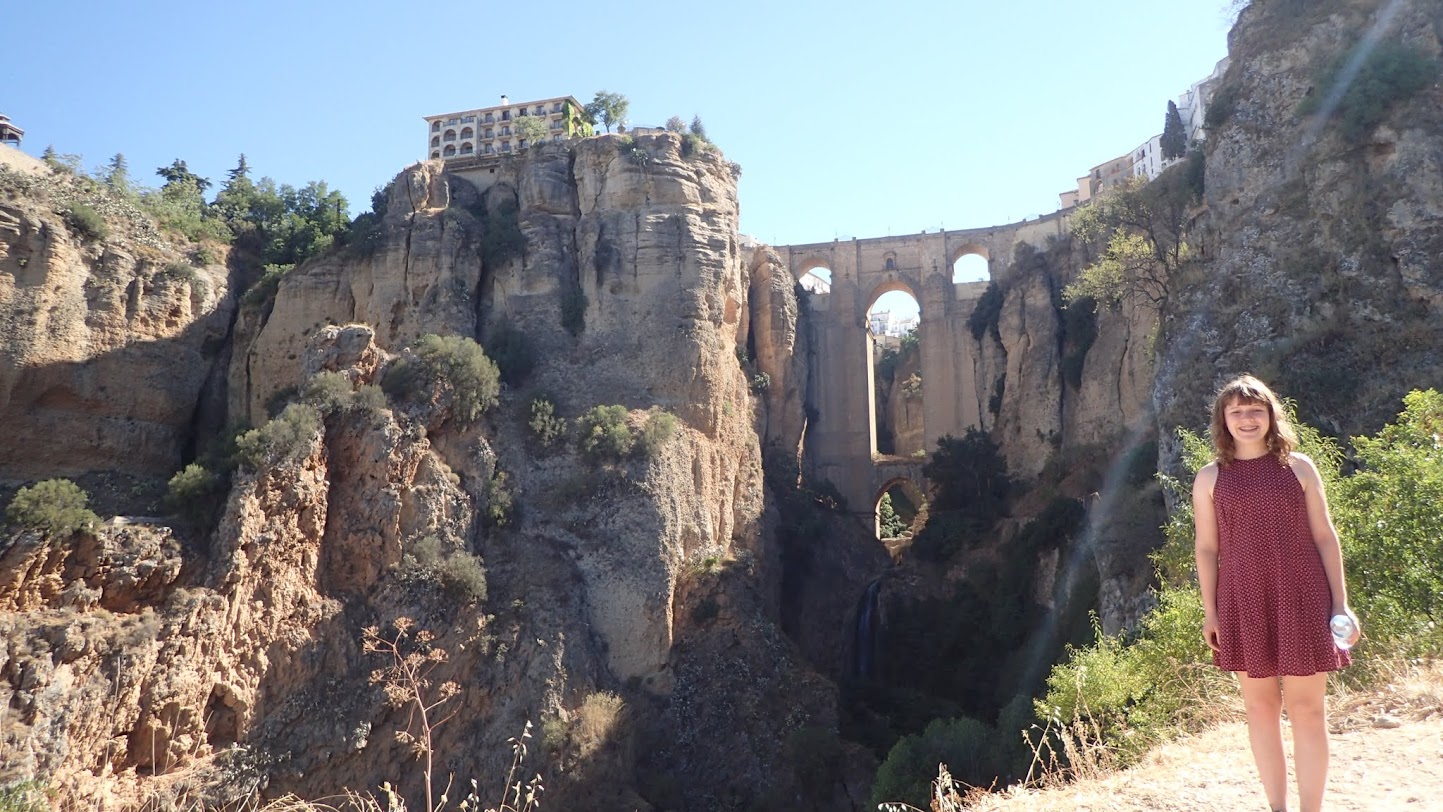 before it got too hot, and admired the views from down there. Once we climbed back up, we toured the bullring which was very interestin 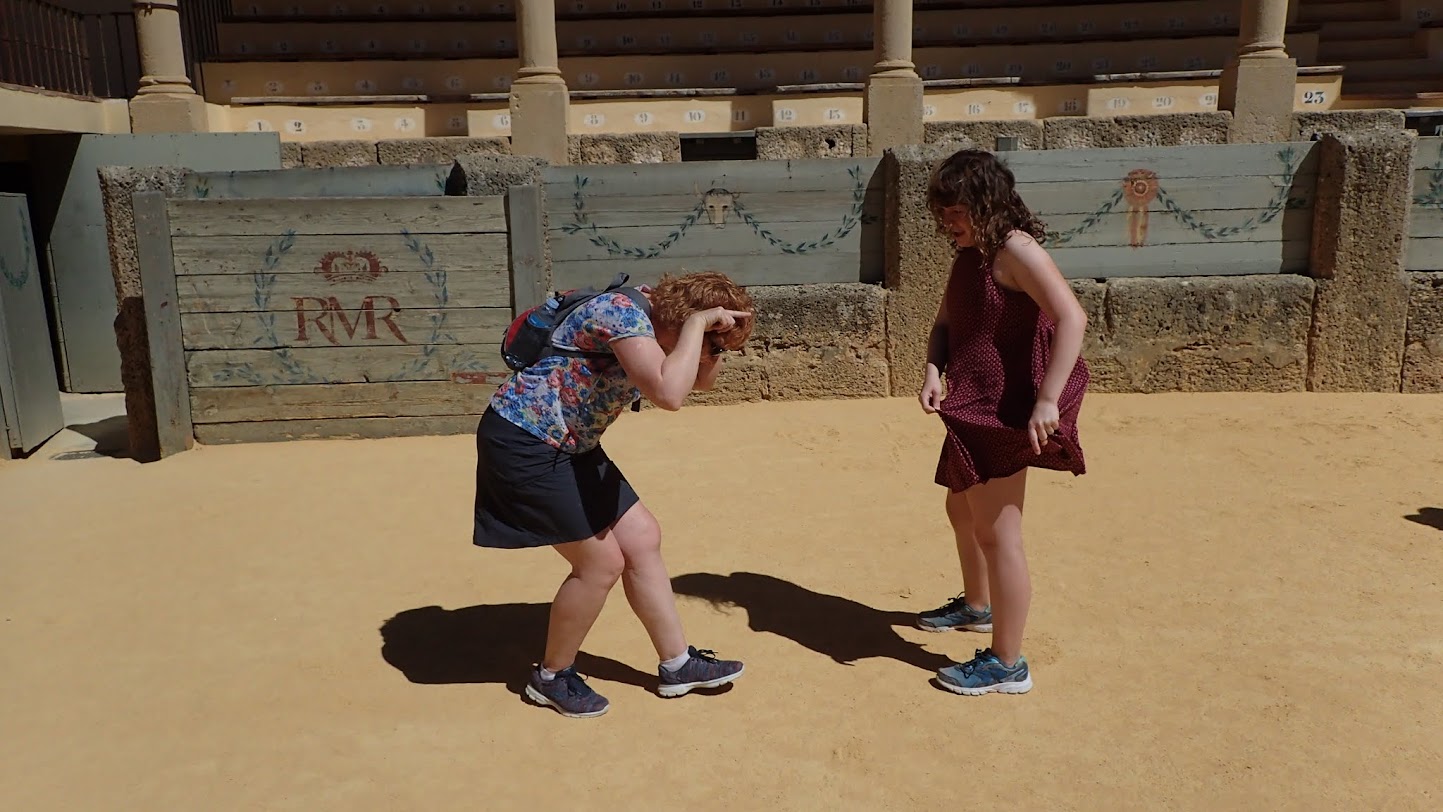 g, although the wind was starting to pick up and there was a lot of blowing dust. For lunch we wanted to go to this restaurant on the edge of the town so we walked all the way there and at this point the wind was blowing so hard it was difficult to walk. Because of that, all the outdoor seating was closed so it was hard to get 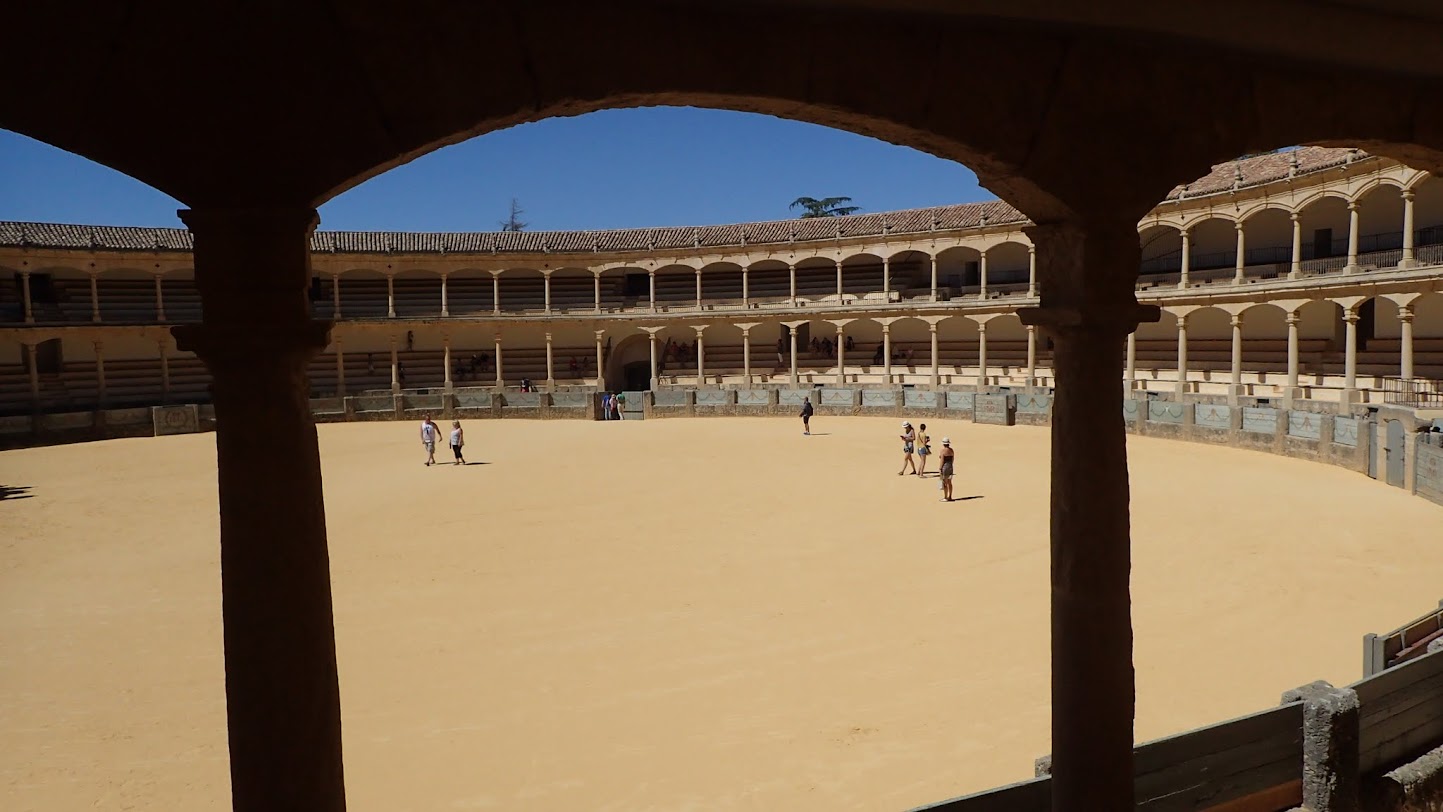 space in a restaurant, so we walked all the way back up to near where the Parador was and wound up eating at El Morabito, a restaurant at the edge of the square where we’d had dinner the first night and where they were leaving food out for the cats (not 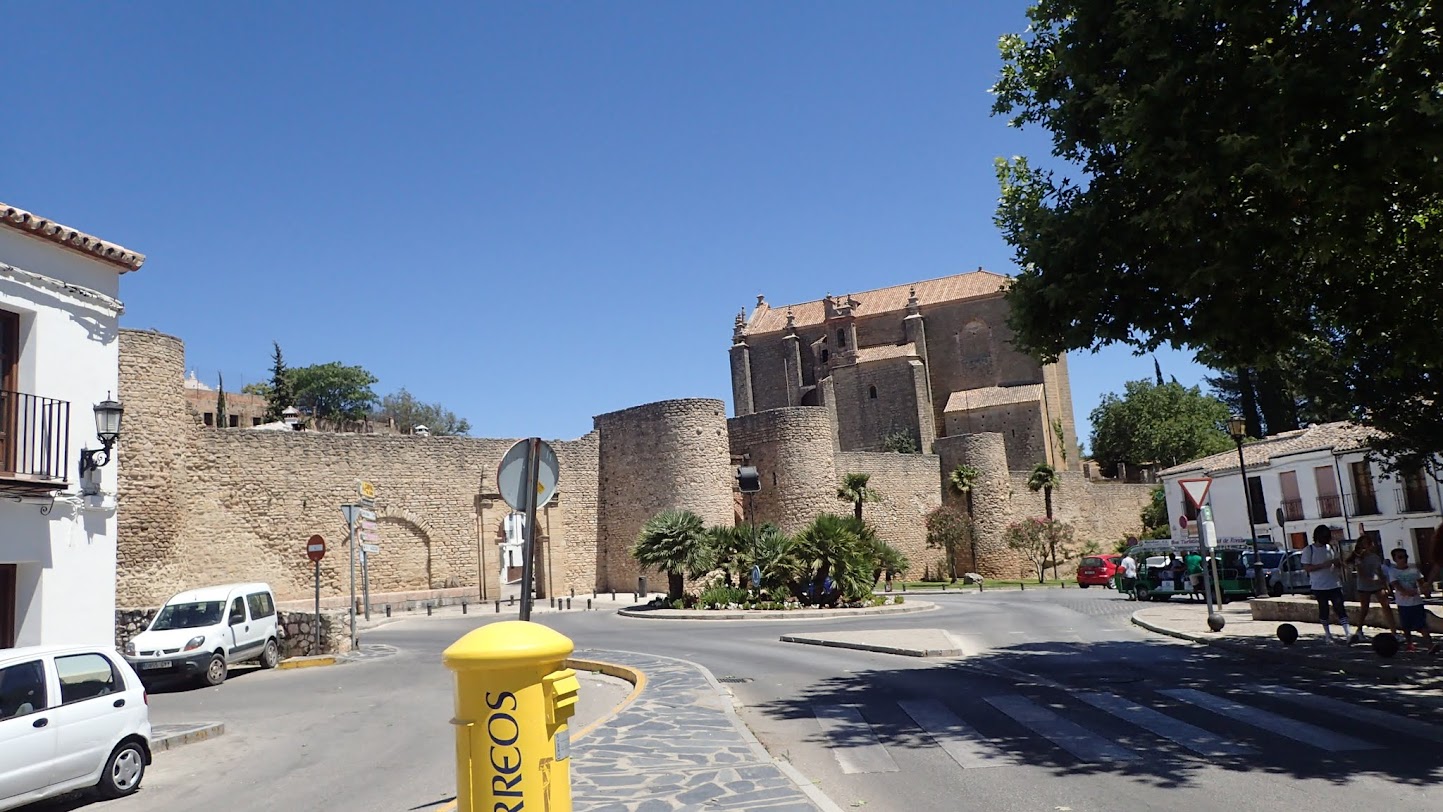 near where the restaurant was though). That tur 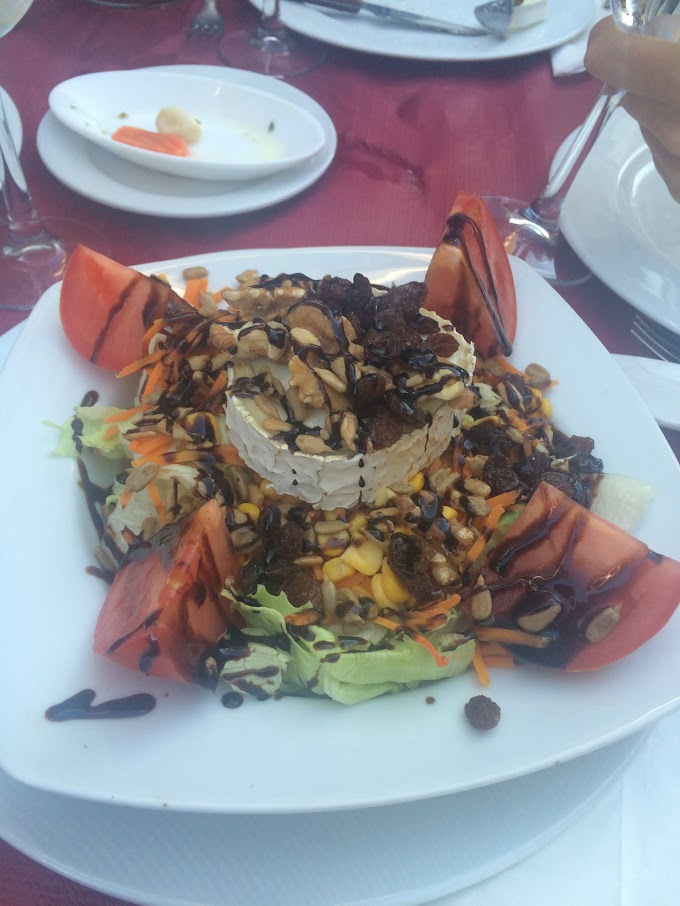 ned out to be a really good choice, because even though we sat outside it was protected from the wind, the view was great, and the food and the service were really good too. The house was also beautiful, built in the 20’s and you could just picture the parties they must have had there.

After lunch, Mark and Charlotte went to the pool and Genevieve and I hung out in the bar. Then that night for dinner we had meat, meat and more meat in another restaurant in the alley. It was all very good! 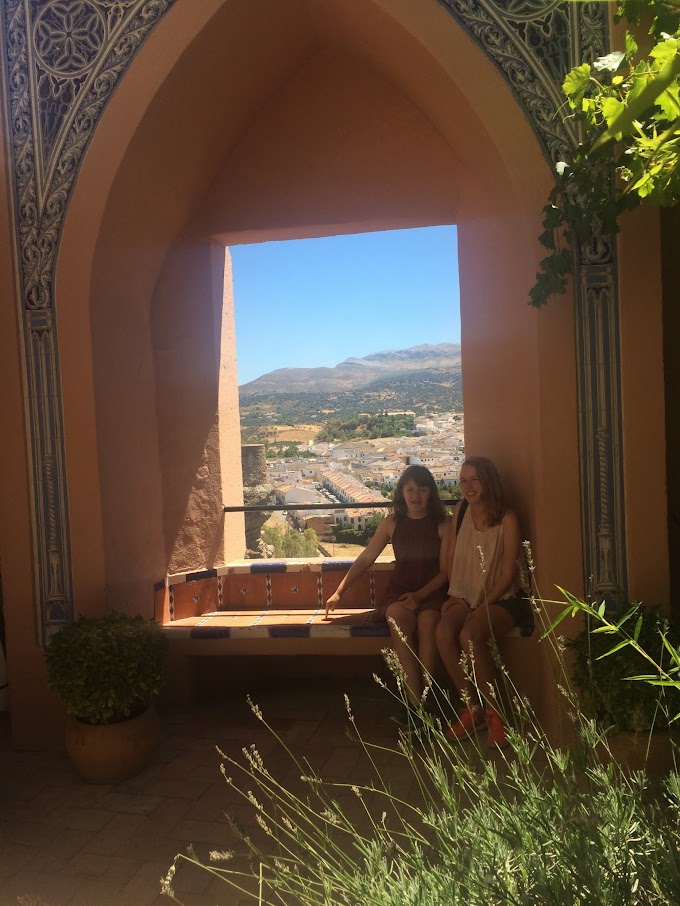 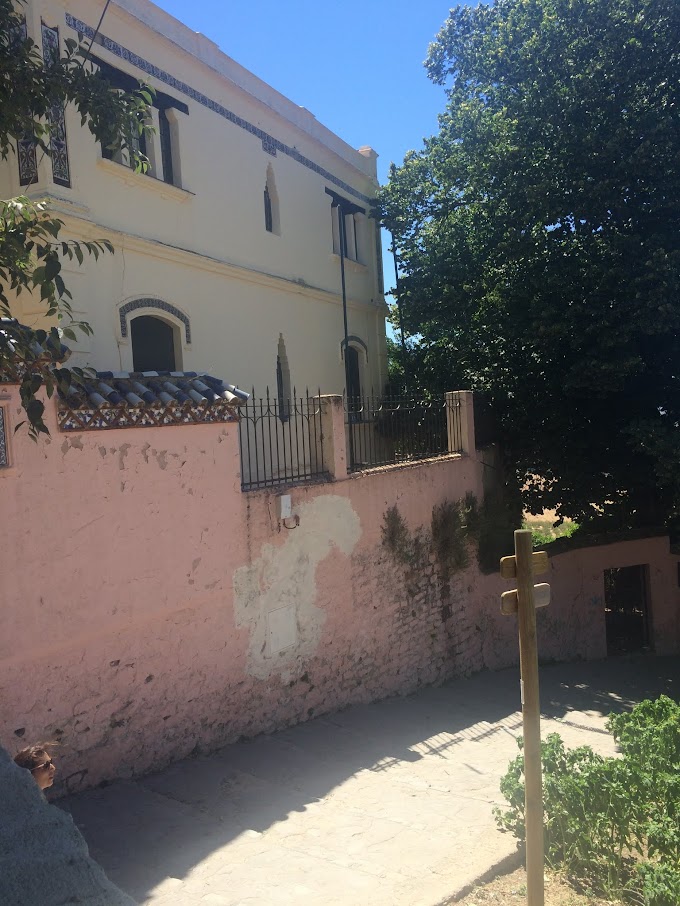 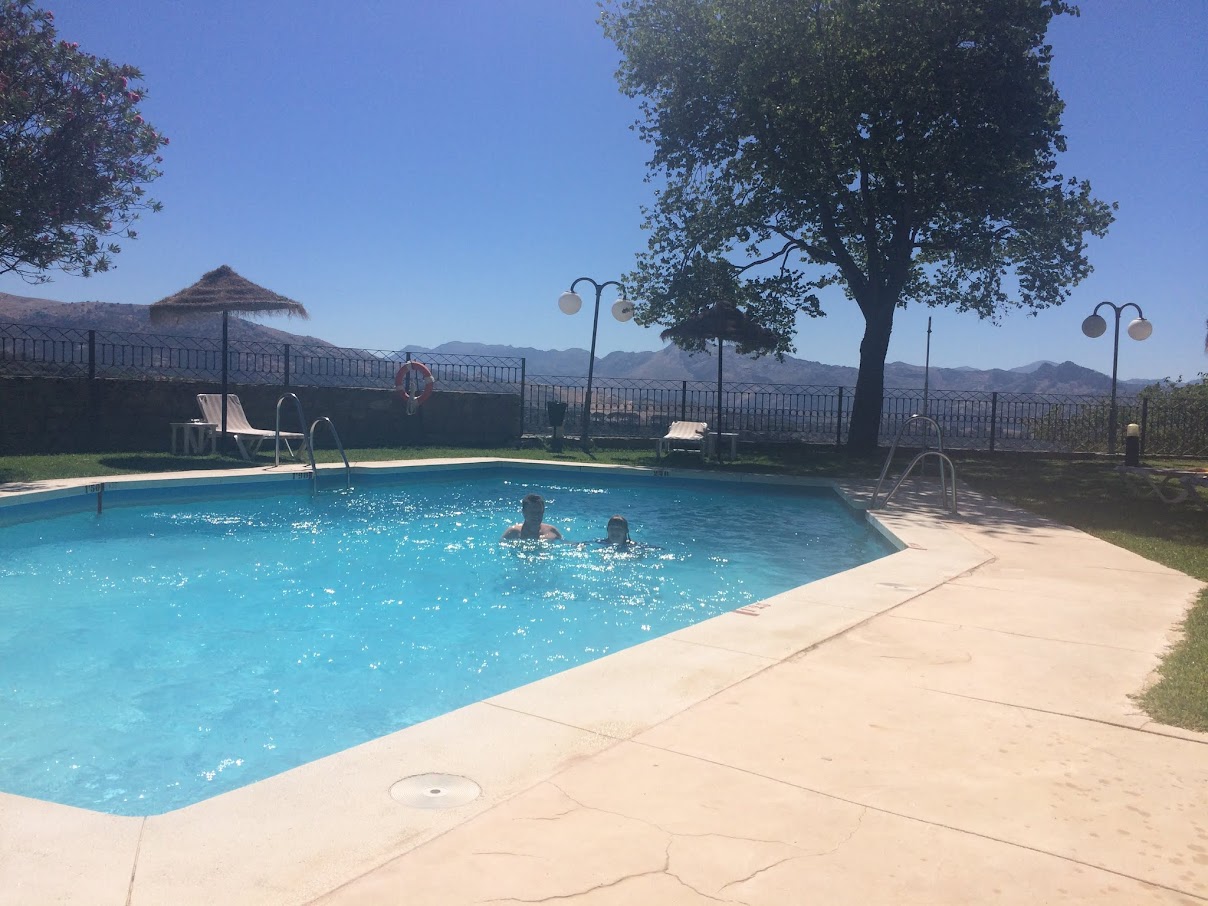