We got our stuff packed up and the apartment cleaned and headed out to the metro which we took to the Renfe station for our high speed train to Sevilla. I do love these cities with their easy public transport! We got some food for the trip at the train station and then used their fr

ee wifi until it was time to board our train. We had good seats and enjoyed the five hour train ride. Once in Sevilla we got a taxi to our apartment, a super nice one from Spain Select. It might not be a good idea to get a vacation rental that’s better than your house! Once we were 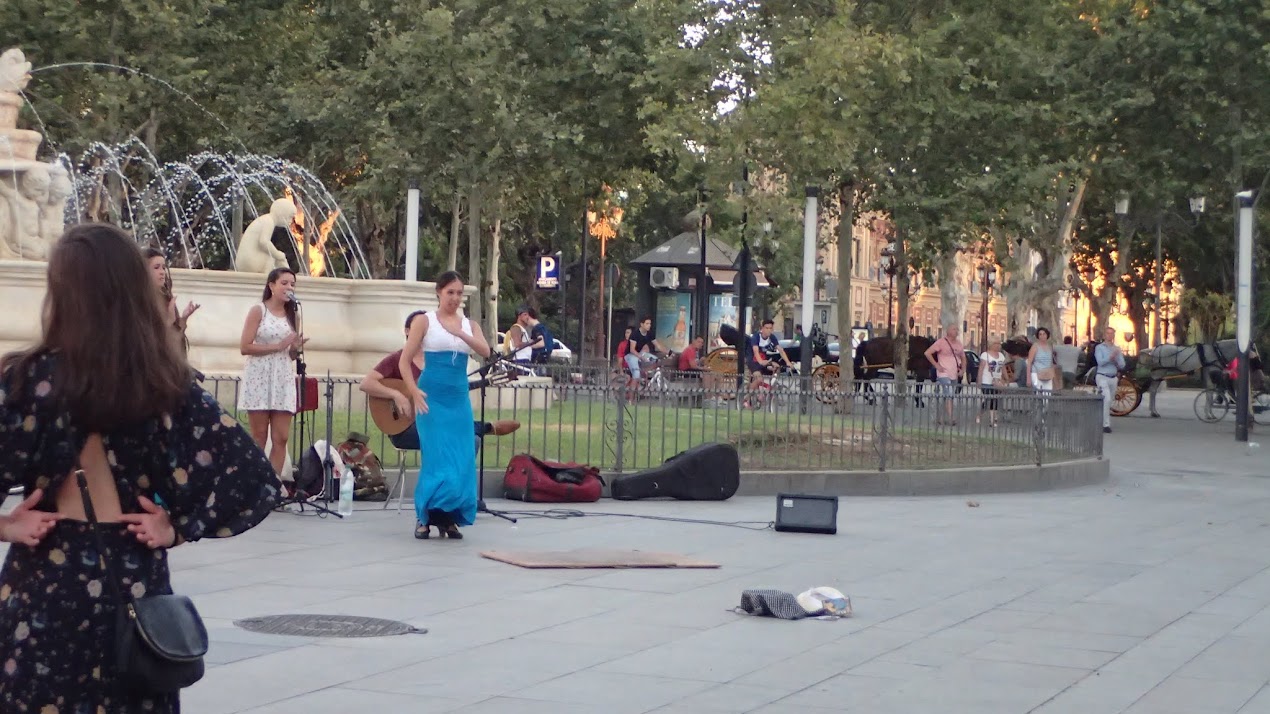 done admiring our palatial digs, we headed out to the nearby Mexican resta 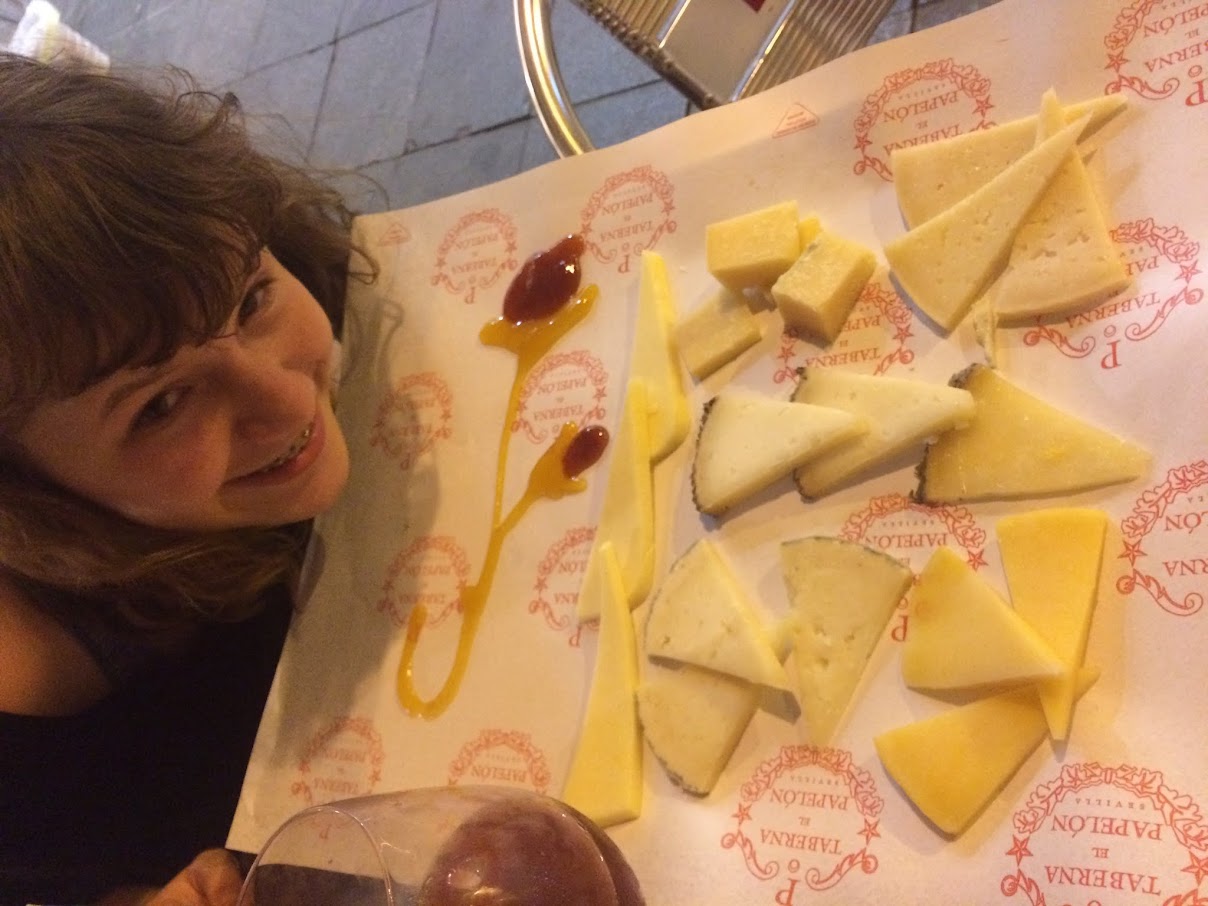 urant for margaritas, chips and salsa. After that we hightailed it back to our apartment because one thing about Seville in August is it is dramatically hot. I mean really hot. Like “I might die if I walk that block in full sun” hot. Charlotte, Mark and I headed back out when it got close to sunset to walk around, admire the parrots (here too!) and the spontaneous flamenco dancers, and have some sangria and cheese at Taberna el Papelon for a light dinner. 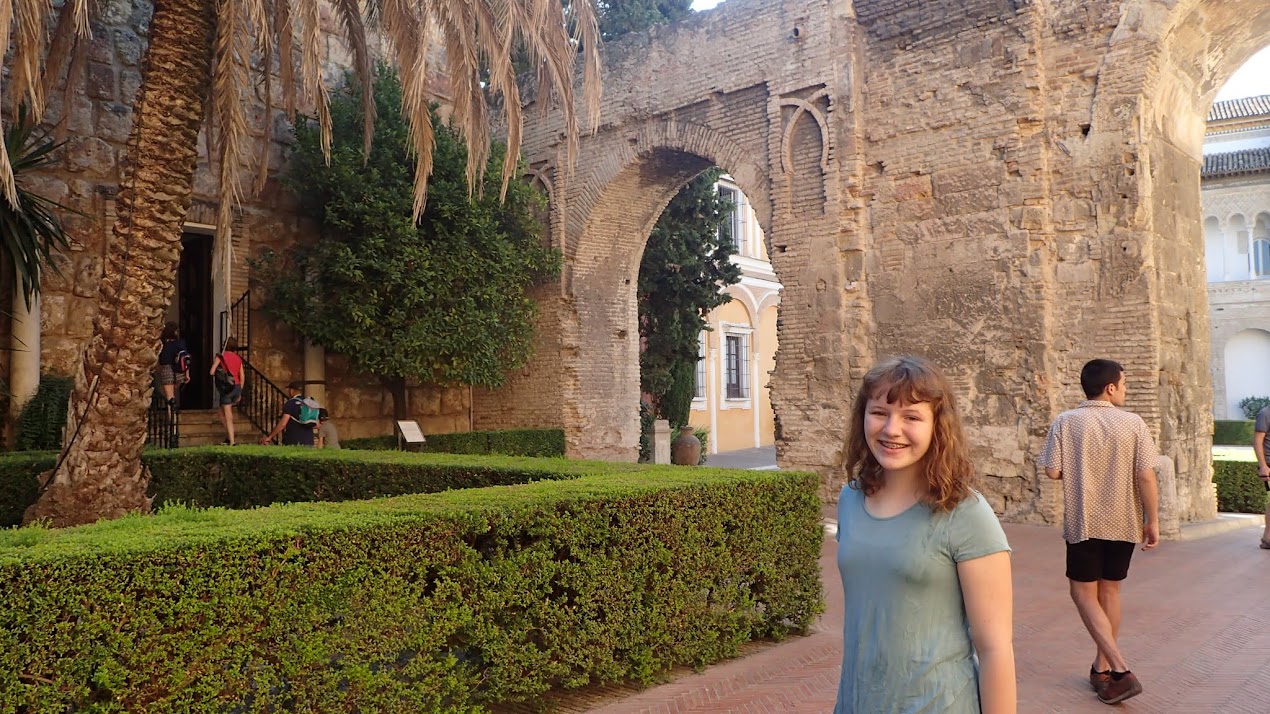 instead went hungry) we arrived to tour the Real Alcazar de Sevilla to use our online tickets before the line got long and we would have to stand in the sun to get in. We really enjoyed 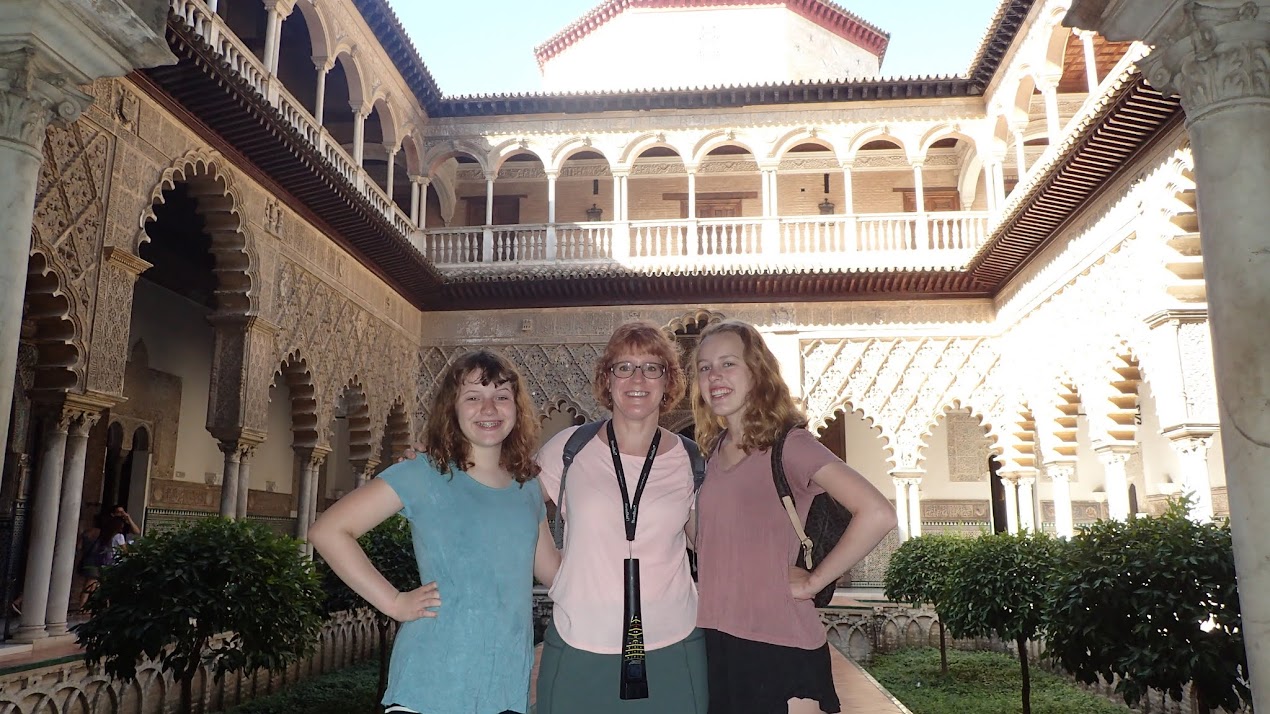 the Real Alcazar and think it gets short shift in comparison with the Alhambra. It’s really a nice palace and the grounds are stunning. When Mark and I were in Seville 17 years before we followed the advice that “if you see the Alhambra you don’t need to bother with the Real Alcazar” and that’s just bad advice. After our tour we went and threw some food at the surly low blood sugar teenager, and 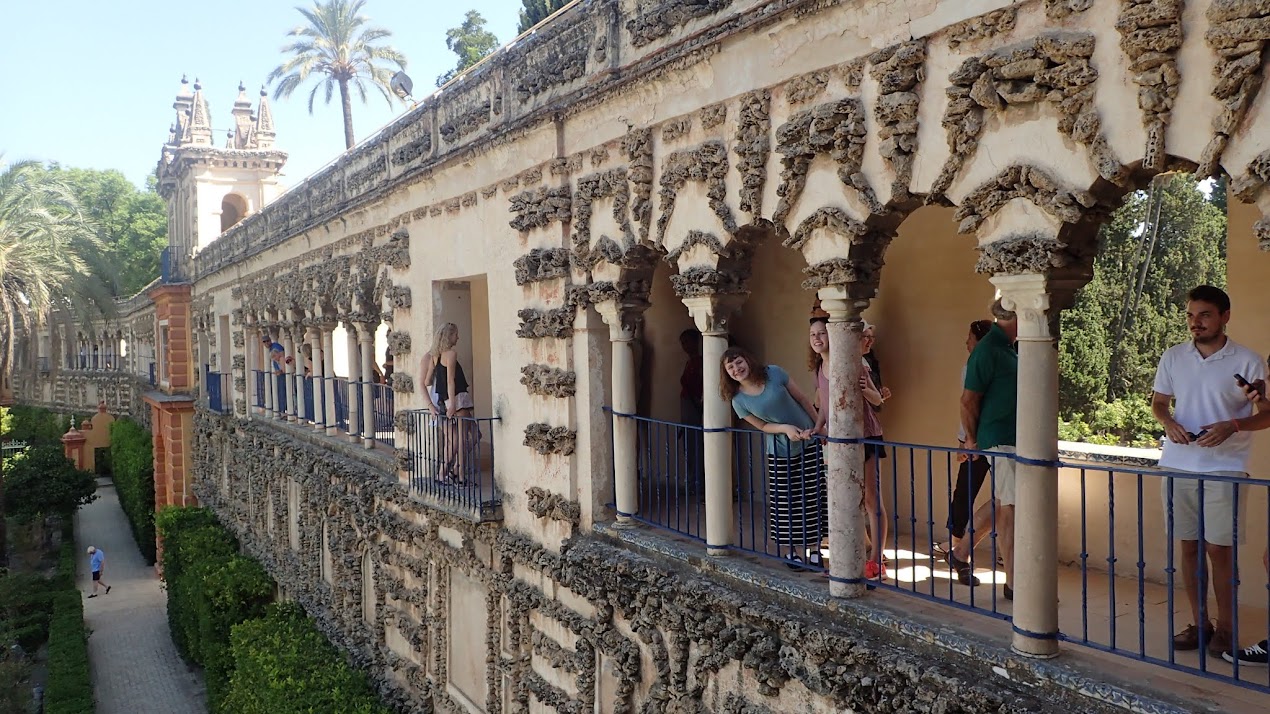 walked around visiting the archives and shopping on Calle Sierpes, the main shopping street, until it was time for our reservations at Al Medina Moroccan restaura 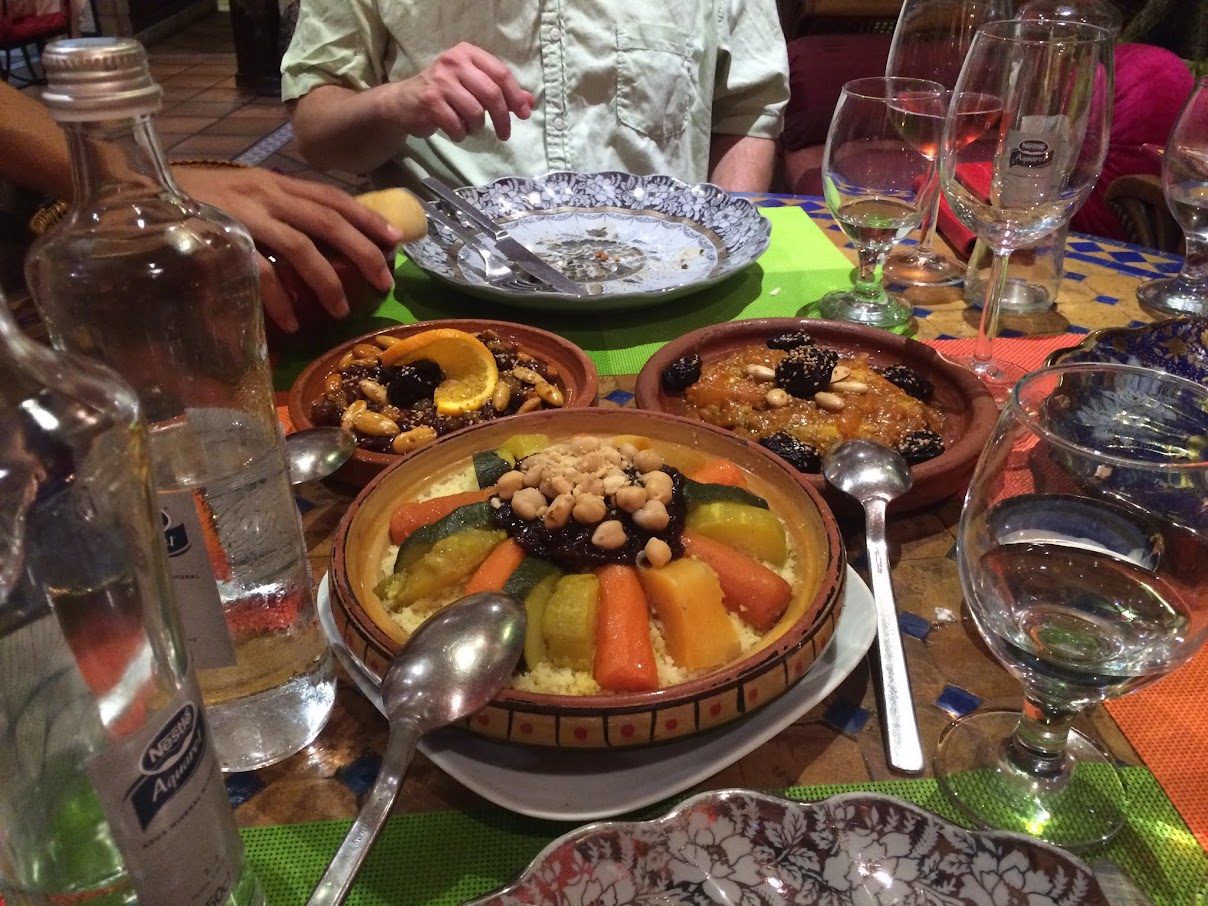 nt. Upon entering the restaurant both Genevieve and I were treated to a nice scowl by a male customer (whose wife was in a hijab), I imagine because we were wearing shorts, but everyone else was friendly and the food was great. We got the sampler meal and it was a lot of fun. After our ginormous lunch we went to El Cortes Ingles for groceries so as to avoid further breakfast debacles. 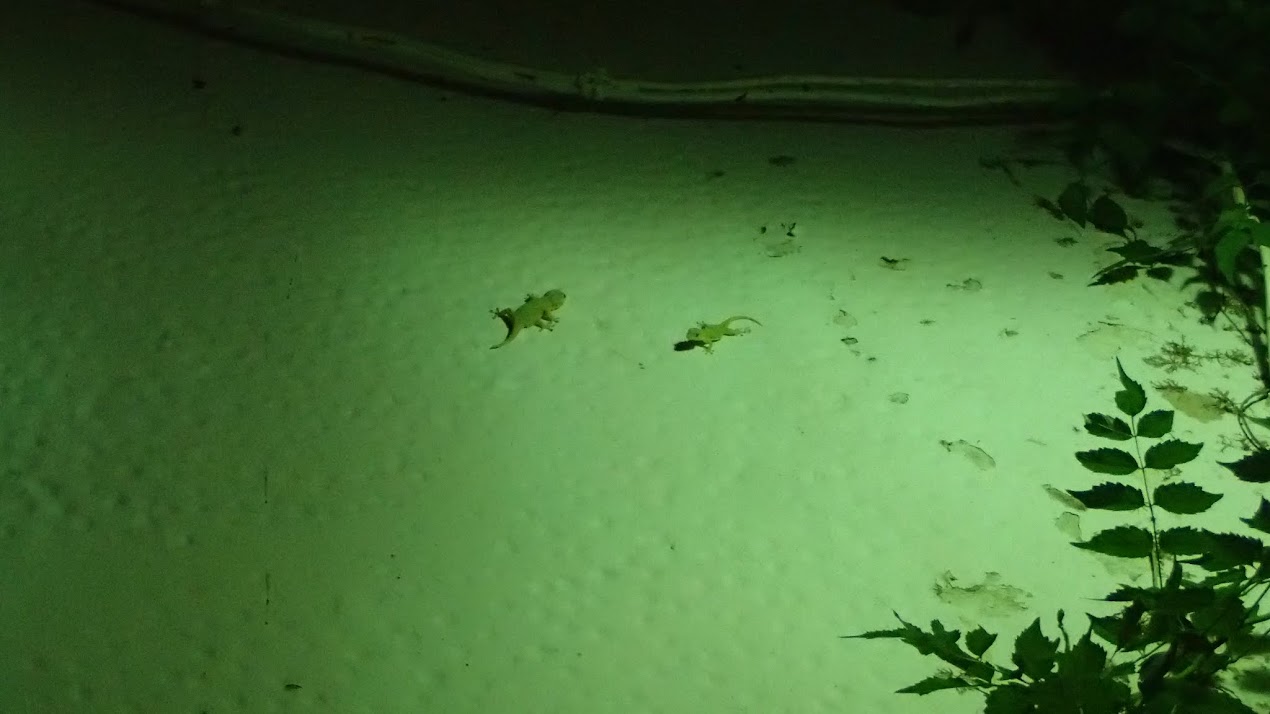 That night we went to the neighborhood across the river that was supposed to be up and coming but it was kind of dead so we crossed back onto our side and wound up hunting in the Jewish quarter for something good. Finally we landed at a little restaurant that looked divey but they had salads and something on the menu for everyone and it turned out great. Some large geckos on the walls, too!

We had debated while planning this trip if it would be worth it to go to Granada from Seville or not. It didn’t work to change bases so it was a question of a day trip or just skipping it. We decided that i 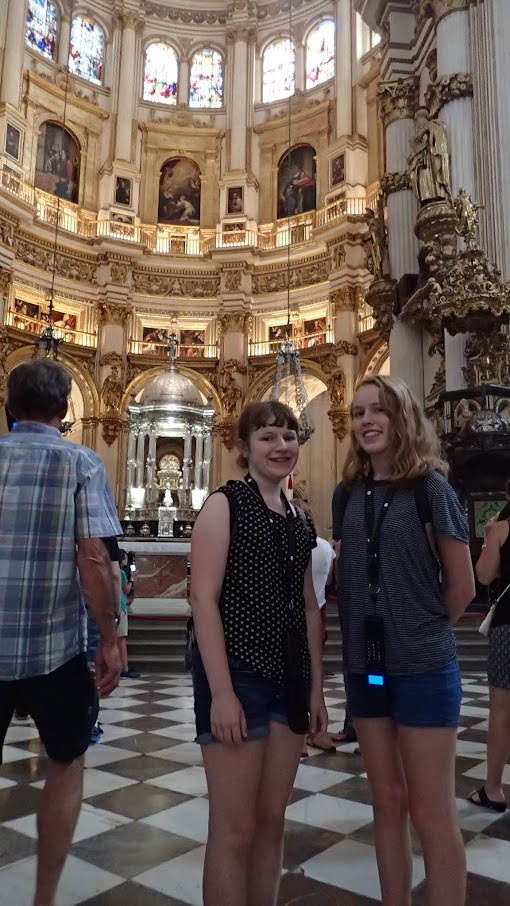 t was worth it for the kids to see it even if it was a hassle, and so I booked a trip with Not Just a Tourist. They were waiting for us in their van at the hotel across the Plaza from our apartment bright and early at 8:00. We had our driver, Juan, our guide, Javi and a trainee guide from France who was super nice. We drove to a little roadside restaurant where we had coffee and admired the kittens there. Then we continued on to G 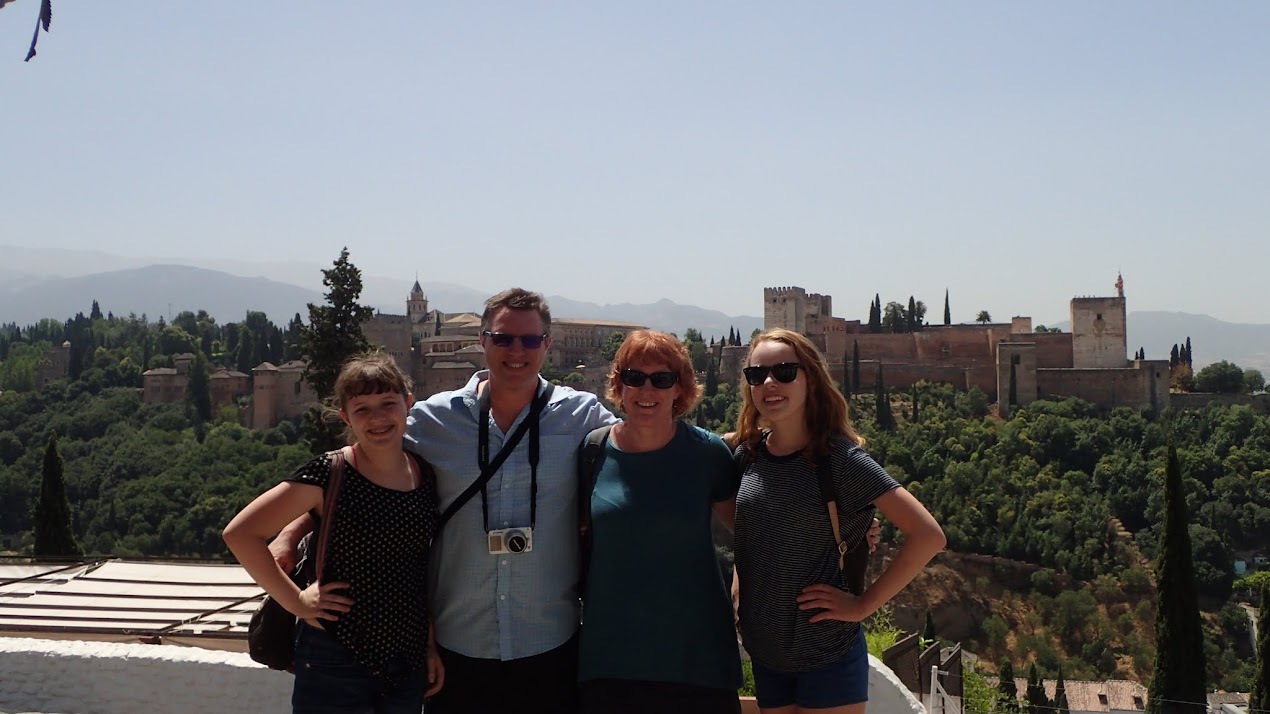 ranada where we toured the cathedral. That was one of the worst audio guides ever! Full of obscure religious and architectural terms that you had no clue what the guy was talking about. Next, we hiked to the top of the hill across from the Alhambra so we could take photos. A bit hot but it was nice seeing the old town close up. Finally we went to the Alhambra where we met our guide and got a good overview of the place. One thing in Spain that’s funny (that I noted on my last trip there) is that they reconstruct and rebuild 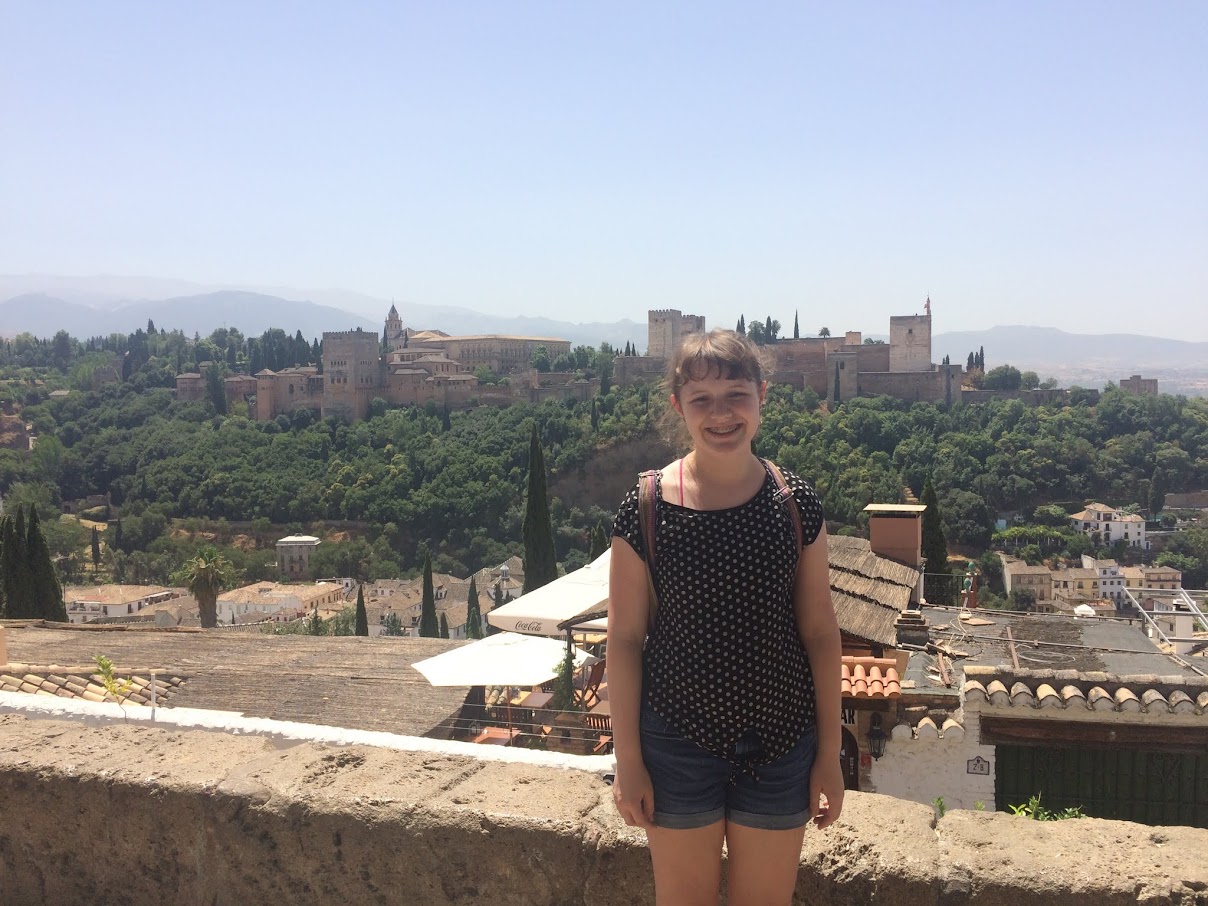 their ruins so you’re never quite sure what it is you’re seeing. Is it really old or did they 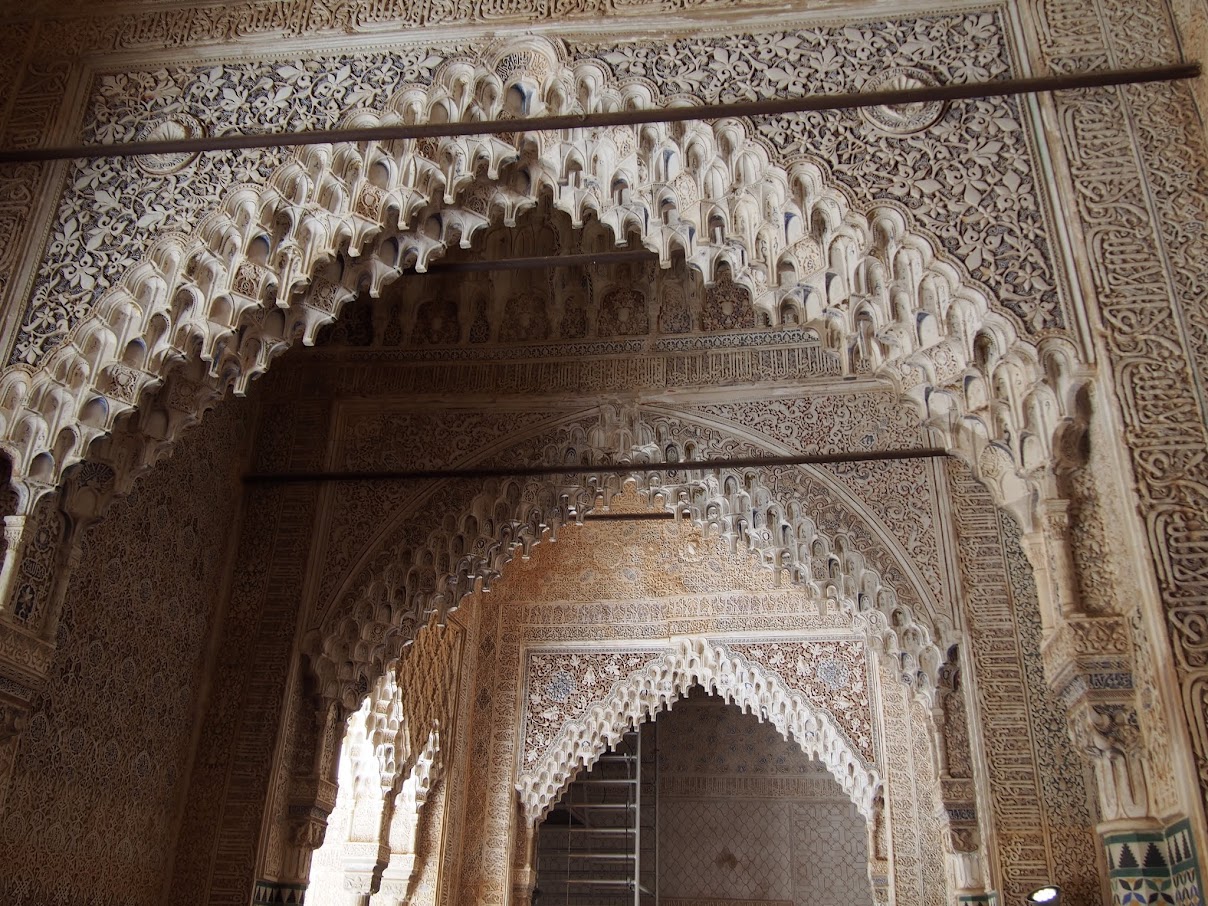 just build it? The friezes in the Alhambra were all recreated from drawings. It’s nice to see it as it would have looked, but a bit disconcerting at the same time. At any rate, the Alhambra is stunning, not so much the buildings (although they’re great) but it’s position on the hill and the views that provides. The drive home was long but overall the day was good and not nearly as grueling as I was worried it might be. So this was worth it. I think it helped that all the guides were fun like traveling with a group of friends would be.

For dinner, we went t 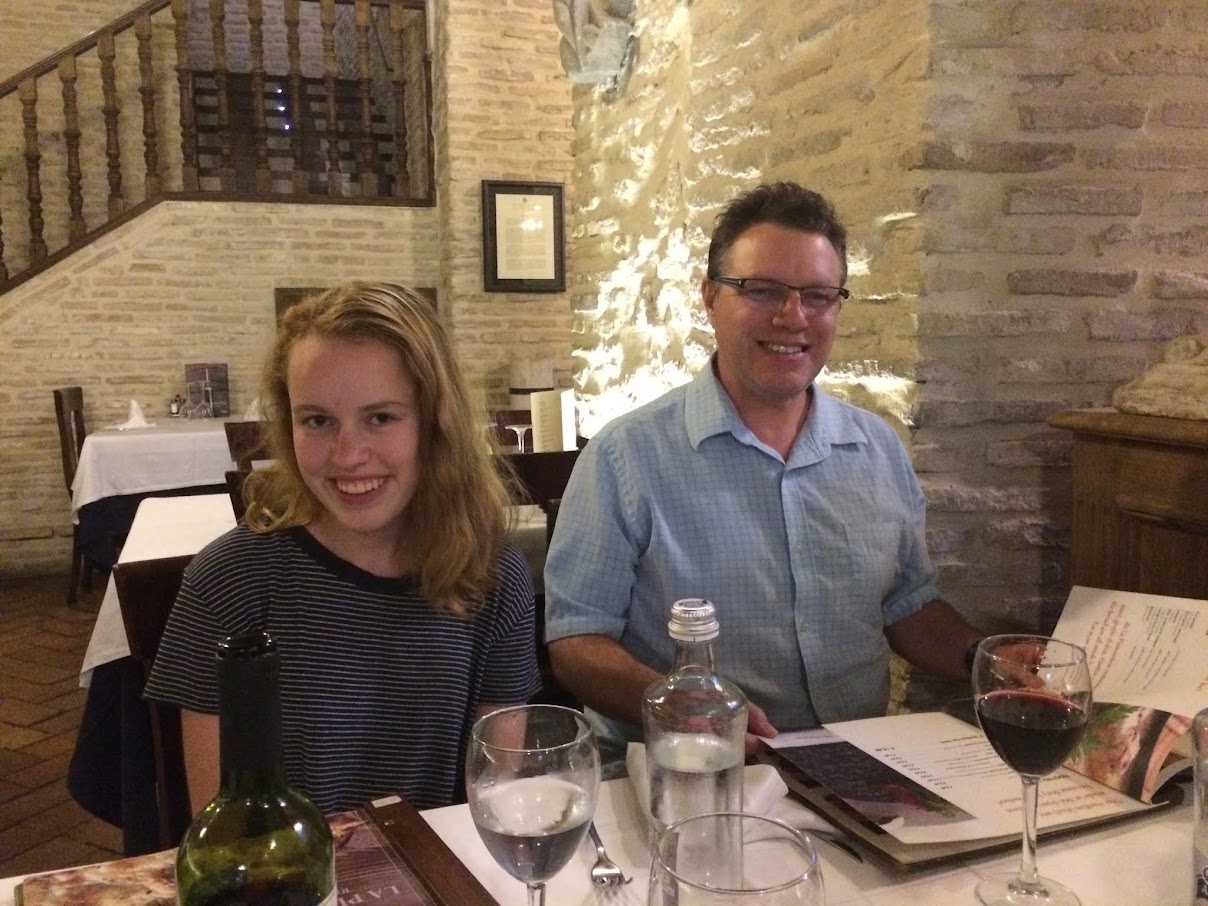 o a well regarded Italian restaurant in the 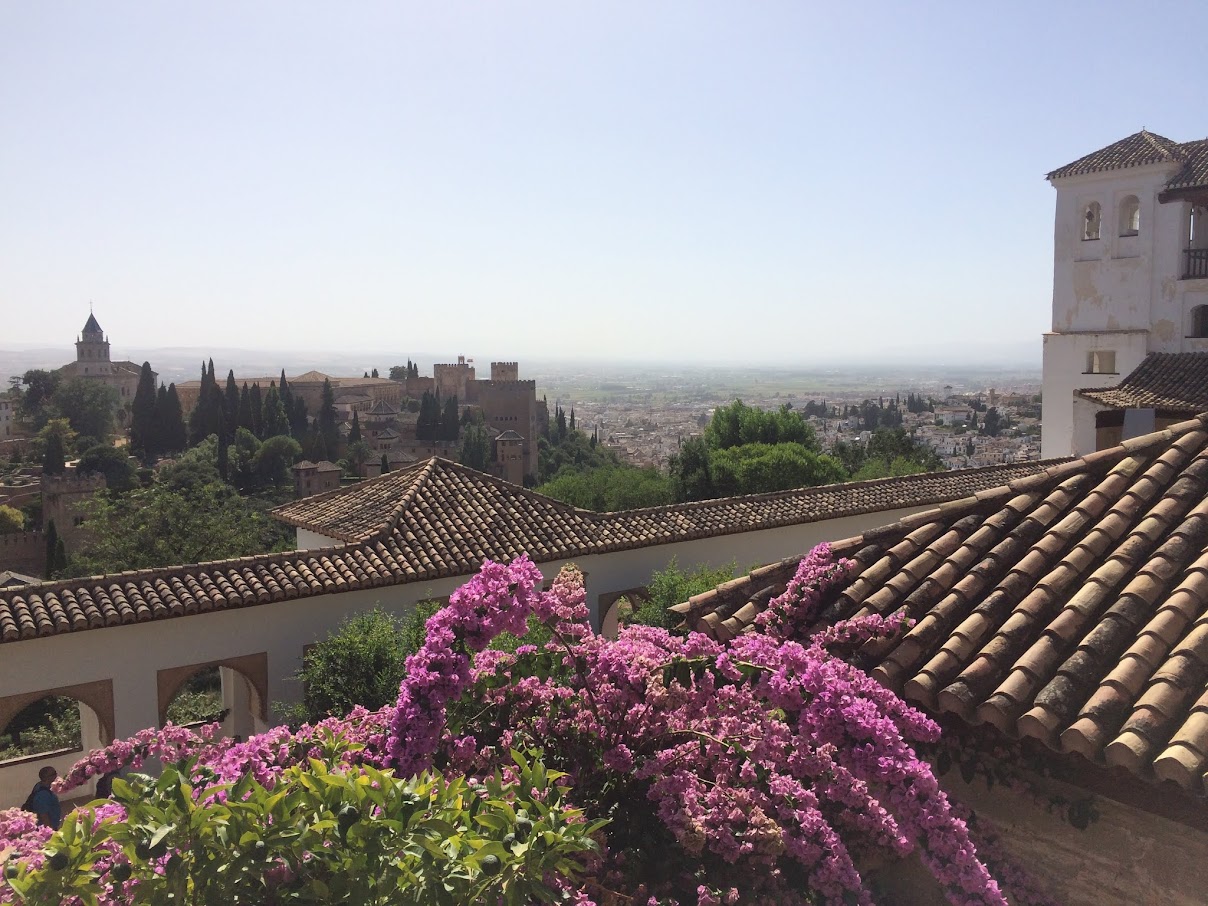 same building as our apartment (the old Treasury buildings where goods were brought when Seville was an important port), La Casa del Tesorero. The building was fantastic, lots of different rooms with exposed beam ceilings and a part of the floor that was exposed so you could see the old shipping containers stored there. The food was good too, although one thing that was funny is I ordered the pizza diavola which the guy warned me would be spicy. So not spicy! I guess they really don’t do spicy food in Seville.

We had breakfast at a little restaurant near our apartment for churros y chocolate, which was good. Then we made an ill advised trip to the tourist office to get train tickets for Cordoba, which was a really bad idea as it took forever–over an hour! Then we walked over the Iberio-American exposition buildings from 1929. When we had been in Spain 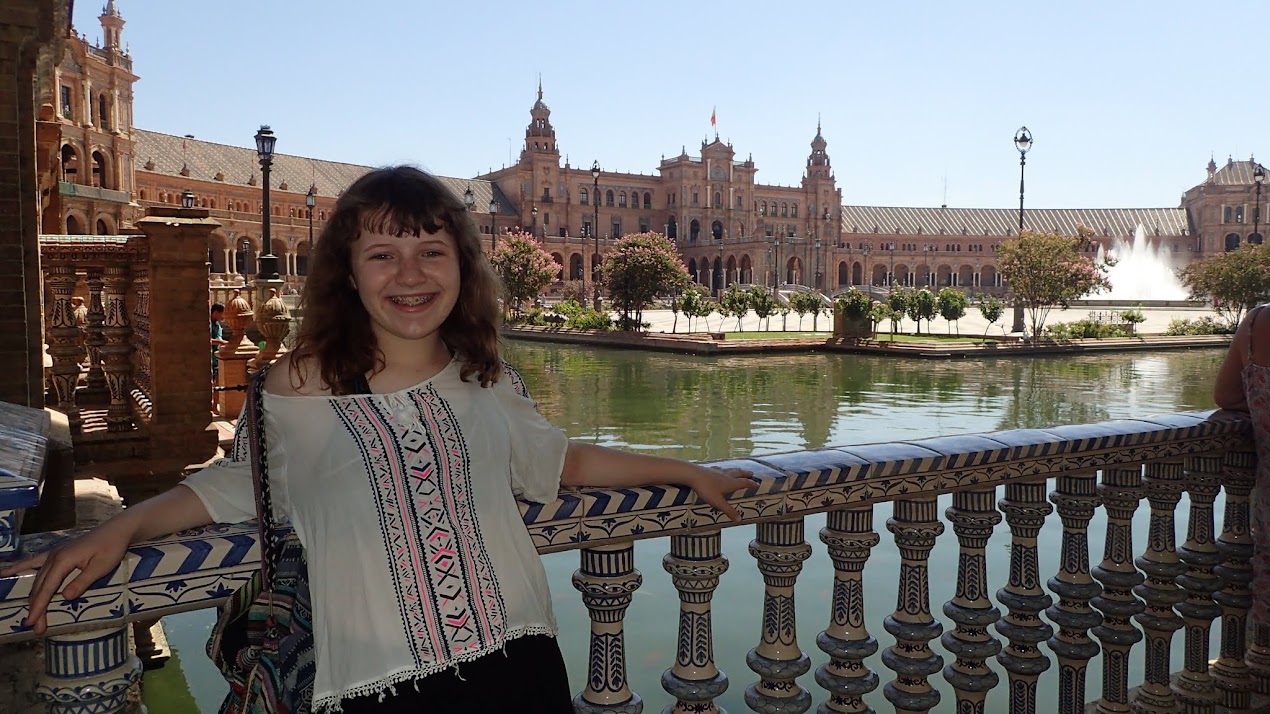 before they had been in bad shape, beautiful bu 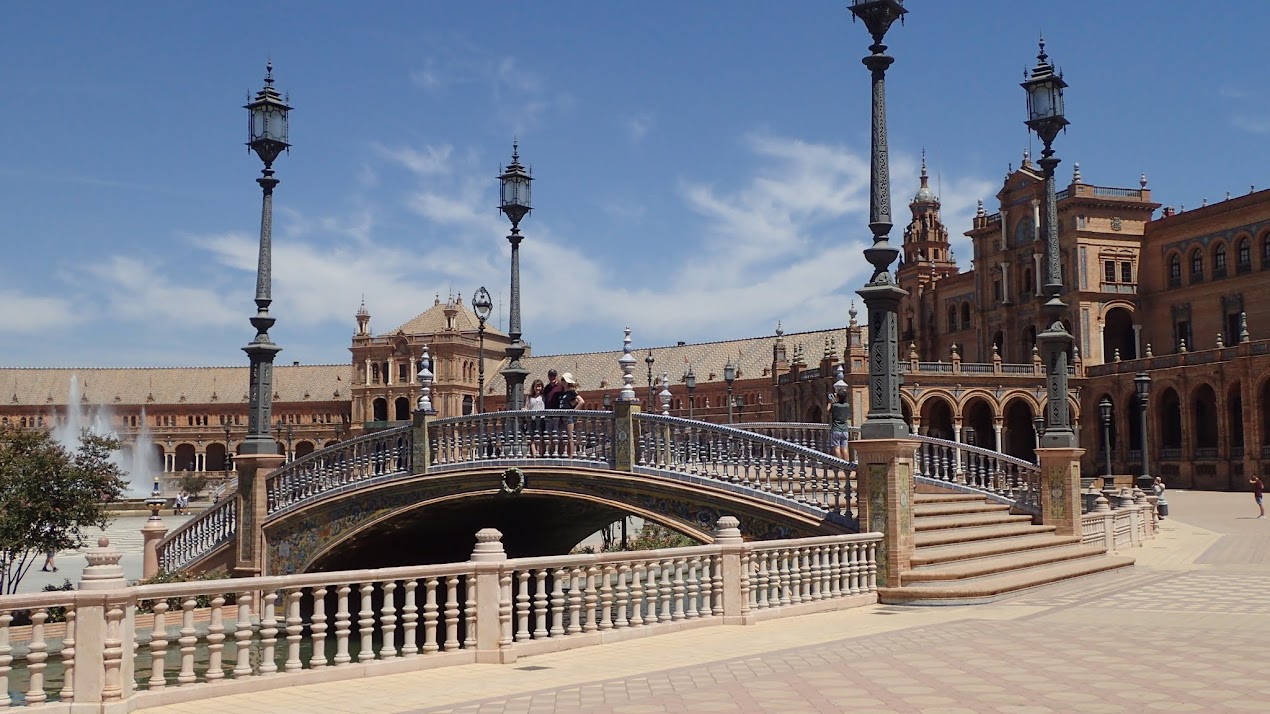 ildings but boarded up and cracking and missing tile and it seemed like such a shame. I had heard it had all been restored and boy had it. Just beautiful. We walked around the grounds but even though it was pretty early it was starting to get hot and there was a lot of sun in that plaza! So we headed out and got a taxi to take us to the Museo Palacio de la Condesa de Lebrija, a very interesting house that dates from the 16th century but it best known

because the lady who owned it in the 1900’s remodeled it to hold her roman mosaics. The upstairs in particular was fascinating as it had the furnished rooms pretty much as she left them. I especially loved the hookah 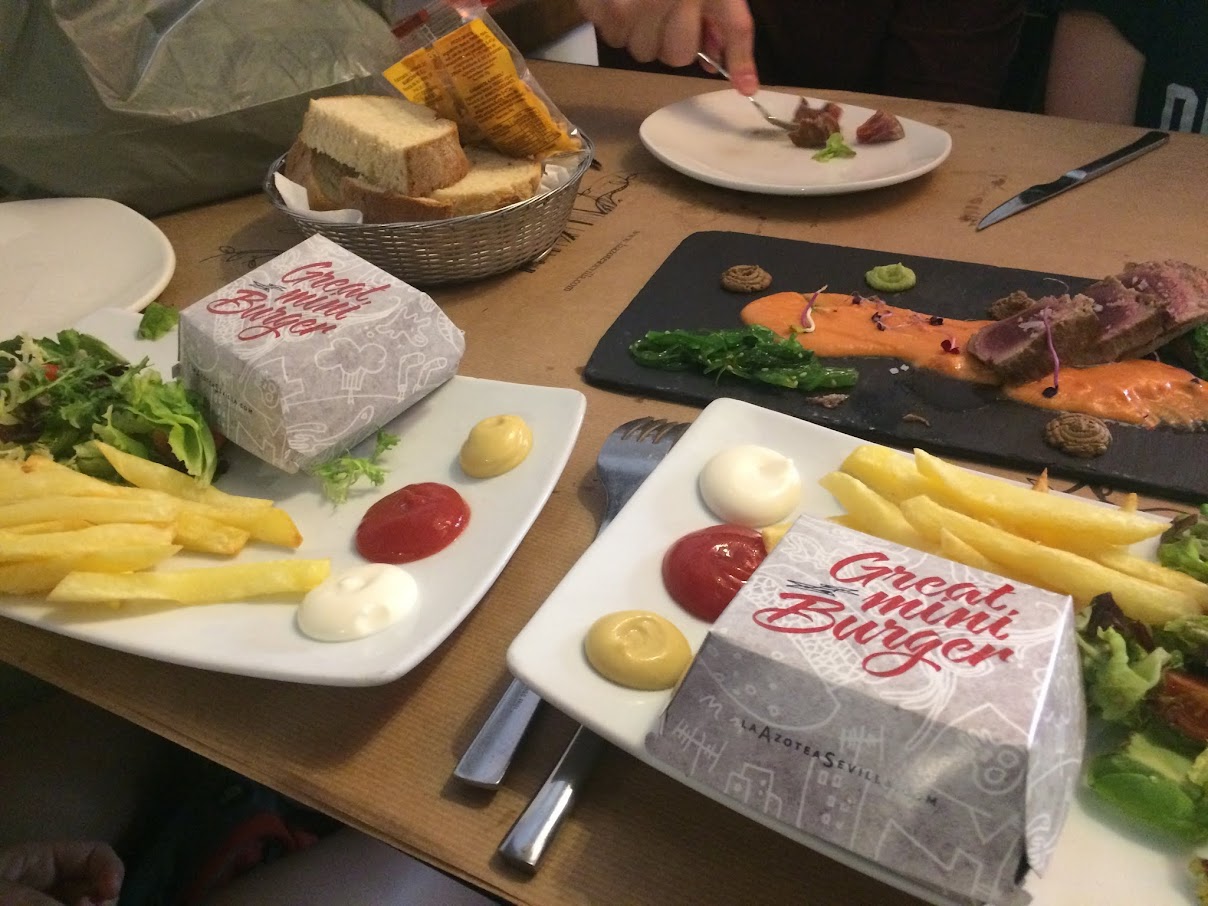 room–so funny to think of an old lady and her friends doing hookah! After the Museo we had lunch at La Azotea, which was crowded but very good,  and then raced to the 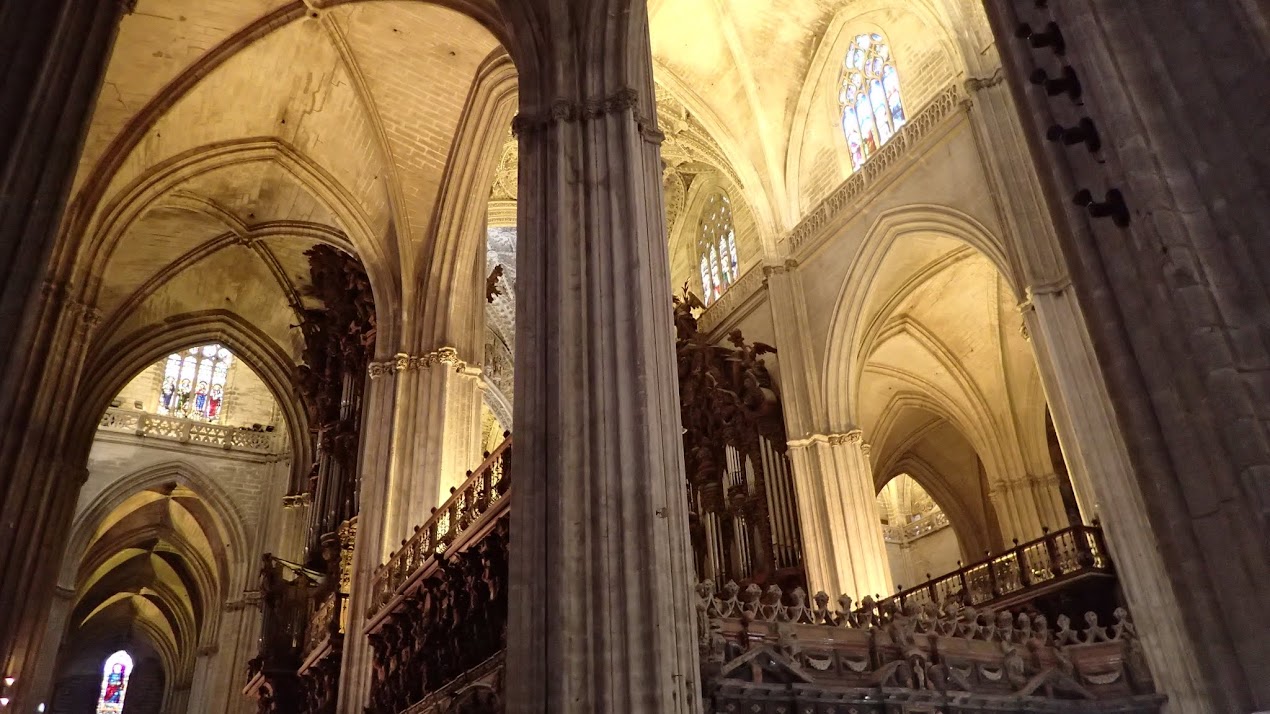 cathedral (the largest gothic cathedral in the world and a UNESCO world heritage site) to see it before it closed. We got to the head of the ticket line at 4:30 and they told us well, we close at 5:00 thinking that we’d just not go see it but we were like “fine” so then we raced through and actually saw as much of the cathedral as we were interested in seeing. After the cathedral us girls shooed Mark off to go back to the apartment and take a nap and we were going to do some shopping. First we went to the tourist shops near the cathedral where I got a replacement for our “Fiestas de la Primavera” print that hangs in our house and sadly has become faded, along with a companion print from another year. We got some more tourist items then headed back to Calle Sierpes where we bought more clothes. We made it back to the apartment without getting lost! Then we all headed out to dinner somewhere forgettable. 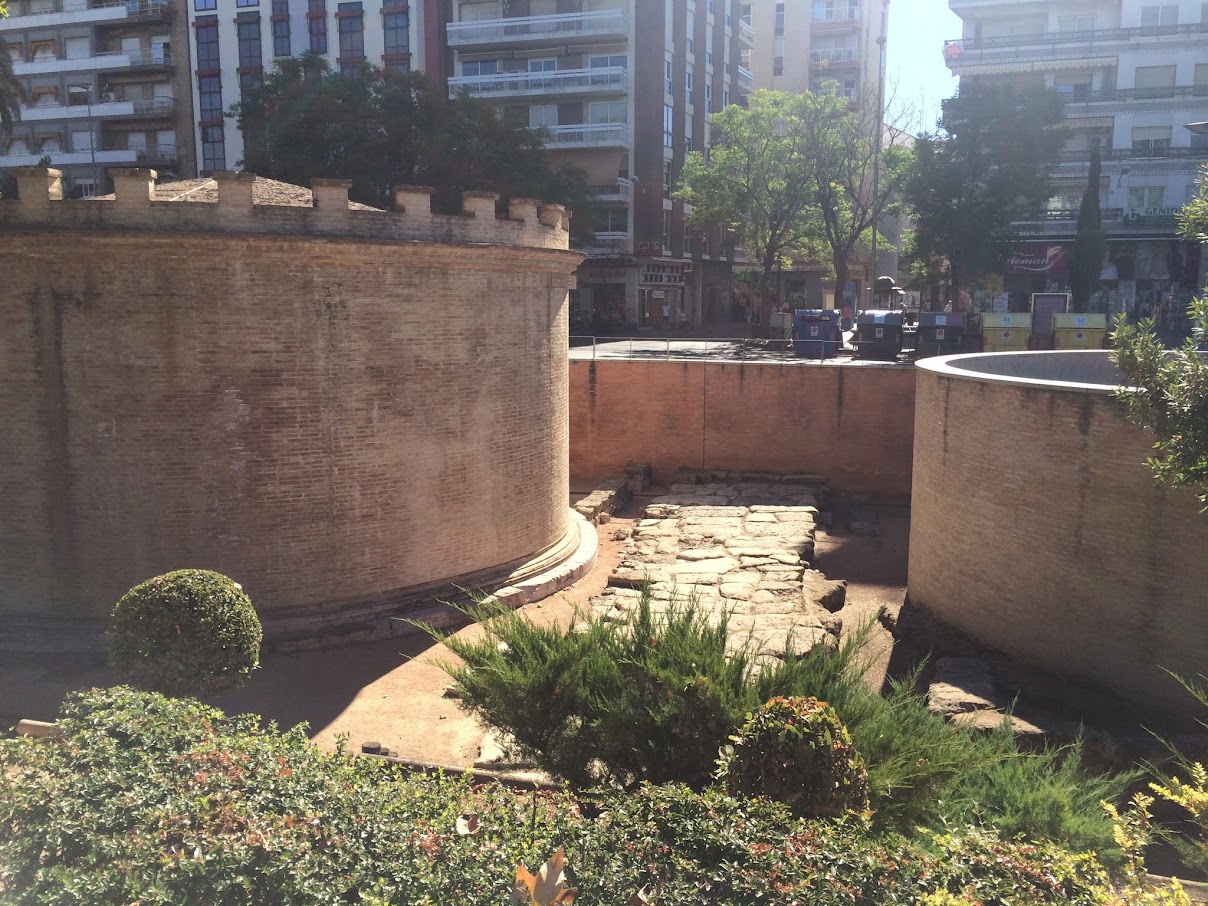 train station, where we boarded our train to Cordoba with no problems. Once at the station, we 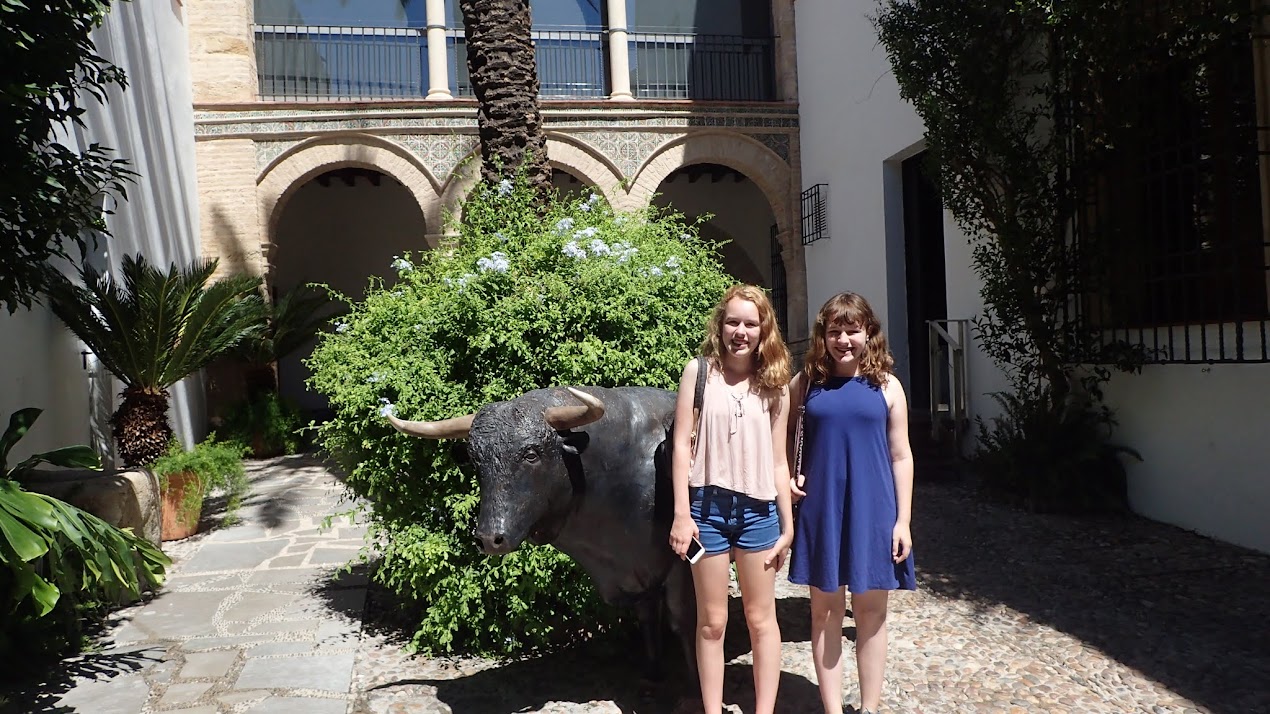 headed out to the old town, which we got to with no trouble passing an “ancient roman” tomb (reconstructed, clearly). We first went to the jewish quarter and the Casa de Sefarada. For some reason it escaped me that the whole purpose of the inquisition was to ferret out “false converts” from Judaism to Christianity. So I learned something! Then we walked around the old town and went to the Museo de Torino (bullfighting) museum, which was interesting. Bullfighting reached it’s heyday in the late 1800’s and it’s kind of dyng out now, not so much because it’s cruel but because there are other figures to idolize like sports stars and actors. Finally we made it to the Mezquita. There was no line to get a ticket and no crowd in the mosque so that is great. We all just love the Mezquita. It’s so amazing the way it seems to j 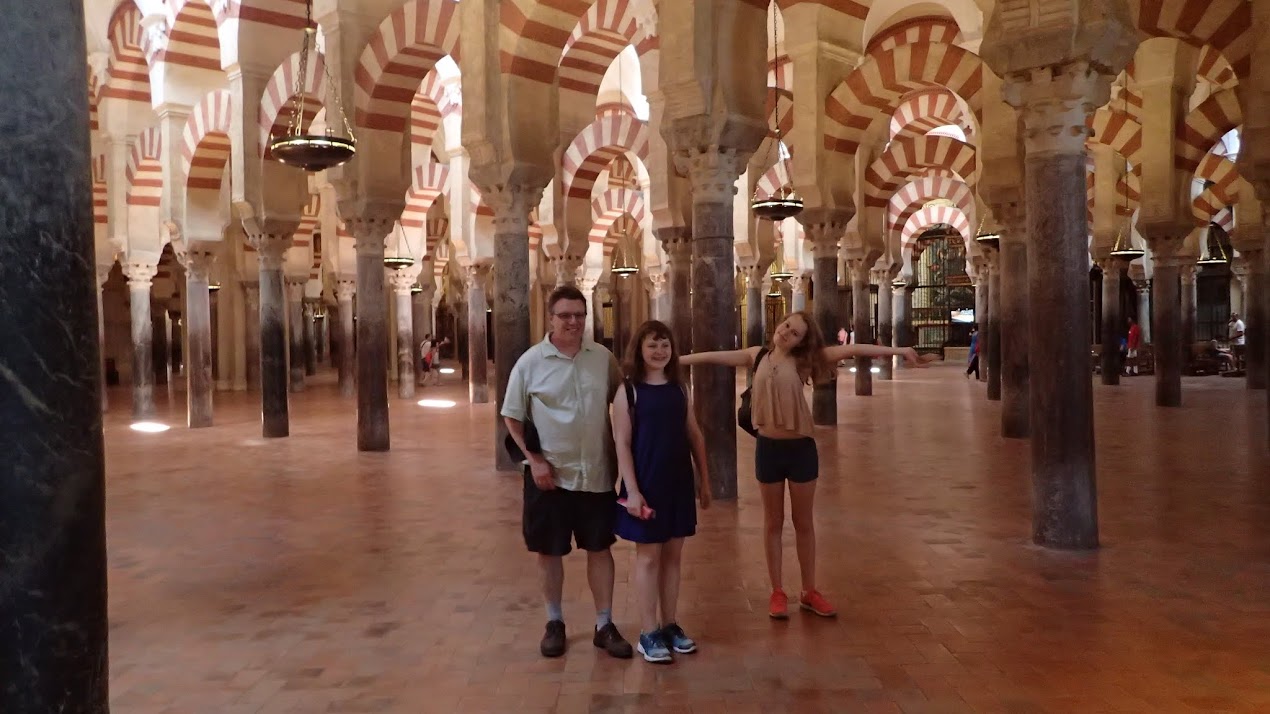 ust go on and on and on. Even the church in the middle of it doesn’t detract too much. And it’s so nice that at one time all the religions could co-exist so 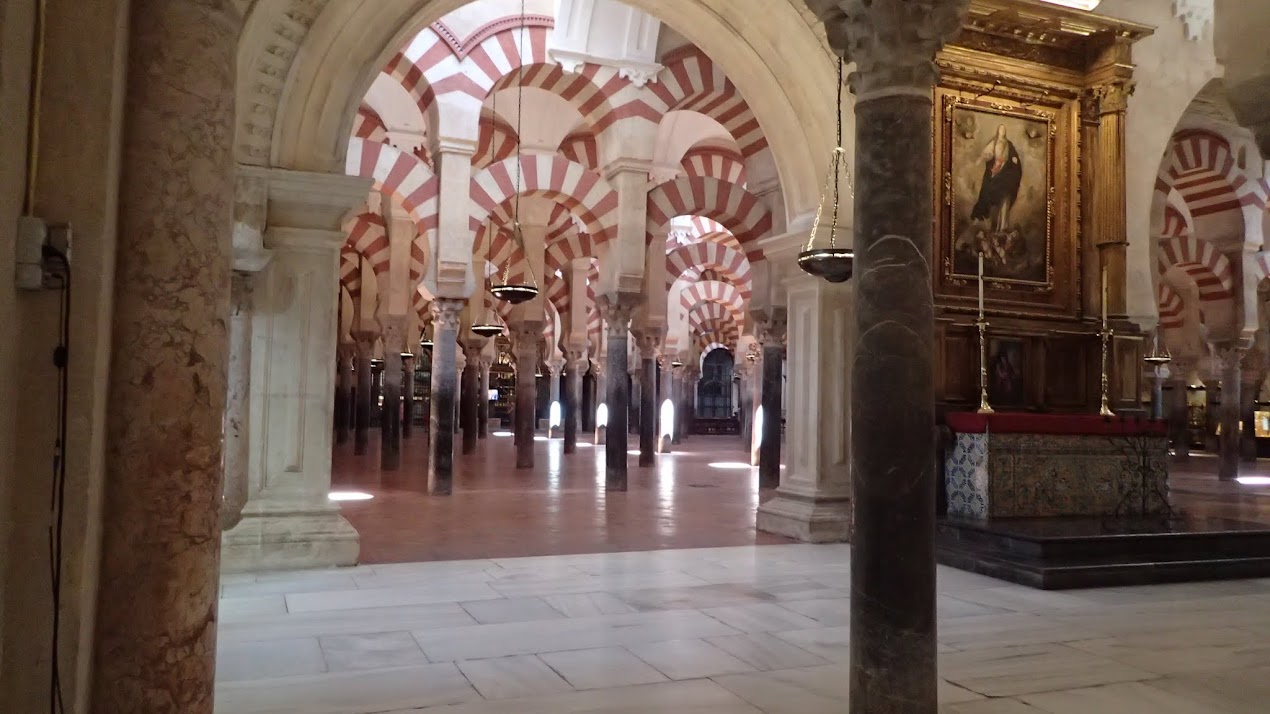 peacefully. We stayed in the mezquita for over an hour and then headed out to lunch. Wound up at a reasonable enough place with decent enough food (Cordoba is a serious tourist town so no really good restaurants). It was starting to get seriously hot, so we had to gather up the courage to cross the roman bridge in full sun to reach the Calahorra Museum, a history museum in the old (rebuilt, naturally) guard tower. It was a good museum, although the girls were pretty museumed out and 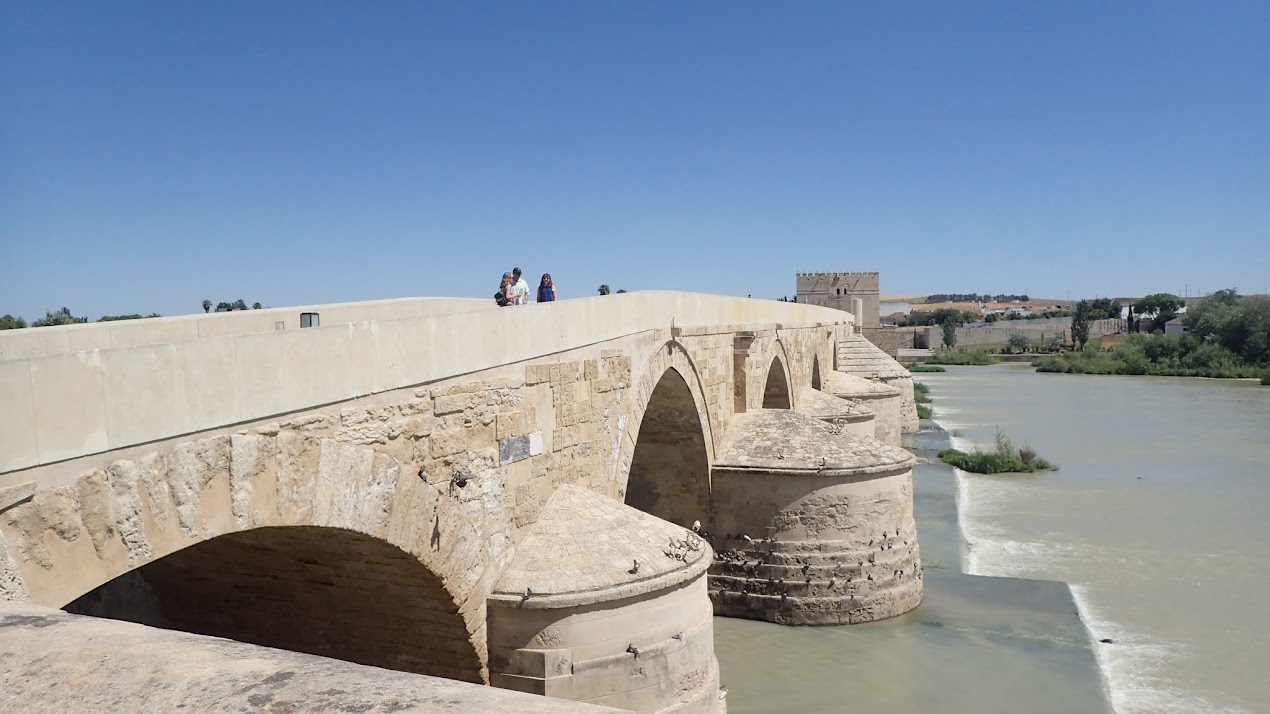 chose to spend their time in the room that boasted the exhibit on lute music. How they listened to lute music again and again for an hour I do not understand. After the museum we headed back into the newer part of Cordoba and stopped at an air conditioned bar for a drink before heading back to the train station and onto our train into Seville.

After a brief respite at the apartment we headed to a very trendy highly rated restaurant, Osteria L’Oca Giuliva. We had to split up to be seated but it was totally worth it. As we were leaving the restaurant, the streets were teaming with young adults mixing and mingling and partying. Ah I miss those days!