Today the girls and I decided we wanted to try the room service breakfast, me because I wanted eggs benedict, and Charlotte because she wanted a bagel and cream cheese and bacon, and Genevieve just because she was giddy with the power of ordering food over the phone. Everything was really good, so folks if you go to the Westin Playa Conchal, just stay away from the buffet as much as you can!

After breakfast we went to the hotel lobby where we met our group to go ziplining. I guess I was really supposed to bring the little slip of yellow paper they’d given me, my name was on a list but it kept tripping everyone up that I’d forgotten it. Anyhow, we boarded the van and set off. Again, my fellow Westin guests somewhat disappointed me. Lots of tattoos, no concept of the country we were in, just not at all what I expected. I thought there’d be a lot of well heeled guests a lot richer than us and instead 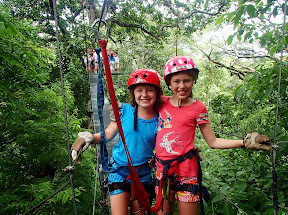 it was like the “people of Walmart”. Oh well. The drive to the ziplining place was on a relatively steep unpaved road but I’ve been on worse (hello, Monteverde, I’m talking about you!). The way the other people in van reacted though you’d think we were about to tumble off the cliff at any moment.

Ziplining was amazing! Fun and not hard and not scary. Pretty much the opposite of the tree climbing!  This is something we’ll definitely do again, they offer it near our cabin.

We made it back to the hotel safely and went directly to lunch at the Italian cafe near the pool. All of our food was good except for Genevieve’s ravioli which arrived still frozen in the middle. Yikes! She just ate the rest of Charlotte’s pizza and we headed back to the room to get into our suits. We went back out to the beach for more fun and snorkeling. There were no jellyfish today but because the tide was lower the 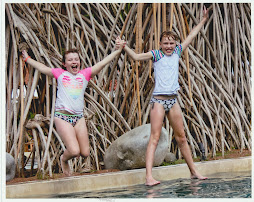 waves were kicking up silt from the bottom and it was a lot harder to see. So high tide is the time to snorkel. We went back to the pool where we stayed for I think maybe four hours? Even caught the attention of the Westin photographer (things were slow) who took this shot of the girls jumping into the pool. So much fun. And again, Westin guests, you disappoint. It got cloudy and I guess the raccoons come out when it gets dark like that so one was walking behind the row of beach chairs. Most people just stopped and looked at it or moved forward in their chair as it passed by them, but one woman screamed and the tattoed man she was with jumped up and began towel snapping the poor thing. Good lord!

We headed back to the room and got ready for our dinner at Cauri, the French restaurant. Again, truly first class food, wine and service.