Pain au chocolat from Banette for breakfast again. Charlotte has decided that she likes chocolate croissants as 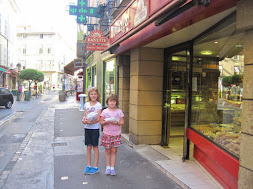 well (why she didn’t used to like them is a mystery) so now we order six. Then we loaded up the car with our towels and swimsuits and headed out for Avignon and the Pont du Gard. We arrived in Avignon with little trouble although I think Wallace got us off the freeway before we needed to. After a teeny bit of circling to find the correct parking lot, we found it, parked and took the shuttle back to the city 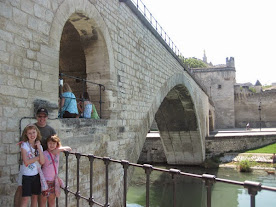 center. First we toured the Pont Saint-Bénezet, whose construction was inspired by the shepherd who went on to become a saint because God spoke to him and told him to build the bridge and when the townspeople laughed at him and told him if he was so sure he should move this huge stone into place, and he did. There’s also a little song “Sur le pont d’Avignon” that talks about people dancing on the south point of the bridge, but really it was the little island thing in the middle of the river they meant. No matter, we got the photo of the family dancing on the bridge anyway. And I bought a little music box with the jingle on it in the gift store, along with a little ceramic magnet of a cicada to have Charlotte stick in Genevieve’s locker when they return to school because she hates the gross looking annoying bugs.

We had lunch at a sandwich shop and then got ice cream at the gelateria next door. The kids each picked clearly kiddish flavors, Charlotte’s turned out to be cotton candy flavor (the literal translation was something like “grandpa’s beard” which makes sense) and we never did 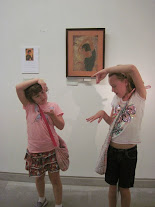 figure out what Genevieve’s was although it tasted familiar.

Next we walked to the Musee Angladon, where we saw a few Cezannes and some old photography as well as furnished rooms of an old palace. Also this great painting demonstrating the proper way to feed a pet bird. Across the street was this old library building from the middle ages too. Love the old buildings! 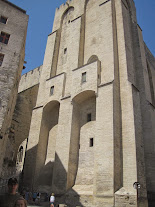 Finally we toured the Palais des Papes, which served as the head of the Catholic church from 1309 to 1403 because the French popes didn’t trust being in Italy. Funny how I knew nothing about this despite my years of Catholic education. Very interesting to see the huge papal palace, and what a shame Napolean saw fit to whitewash the walls when it was a military barracks!

Even though there was a lot more to see in Avignon we wanted to get to the Pont du Gard before it got too late. We found it with the help of Wallace, parked and went to the visitor center where we watched the charming? cheesy? information video on the bridge. Then we walked around the very nice museum. I especially liked showing the girls the roman toilets that would have been in the bath house. It brought home to Genevieve how truly awful the middle ages probably were for people – to have had running water and then not to have it! 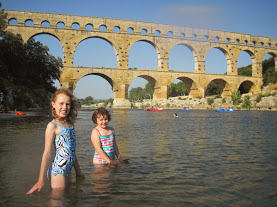 Finally we changed into our swim suits and walked to the bridge. We climbed up to the top of it and then walked across it and then went to the back side because that seemed the best place to swim. The water wasn’t too cold and it was very refreshing and fun to swim in the shadow of the bridge. As it was the end of the day the light was really good for photos as well. We stayed for over an hour and then changed back into street clothes and said goodbye to the beautiful Pont du Gard and went out in search of some food.

We wound up at the Cortepaille near the Avignon airport which is a French Dennys-like chain. Nobody there spoke English and of course we speak virtually no French, so we were very confused to say the least when the waitress brought us salads and the kids plates of salame before we’d even ordered. I guess that’s their thing? We did order and the food was barely passable and not cheap either. So moving forward we were just going to say no to the Cortepaille! We made it back to Aix after 10:00 – it was already dark.