We had been debating how to handle the Louvre. On one hand, none of us are really that into art and we don’t 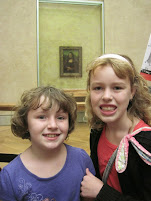 like lines and crowds, so we considered skipping it, but then we thought that for the rest of our lives we’d regret that decision and we really should not be lazy and just get up early and go. And that’s what we decided to do. I had read on my favorite forum, Fodors, that the thing to do was to go right at opening to the Porte des Lions entrance. Apparently not only do most people not try to get in there, but it’s the closest door to the Mona Lisa so you can race up to it and see it before the groups at the main entrance can get there. We left the apartment at 8:30 and went to La Pain Quotidien again, for the yummiest croissants we had on vacation. Took our bag to the entrance, which at first we couldn’t find, but then when we walked through the Louvre and were on the Seine 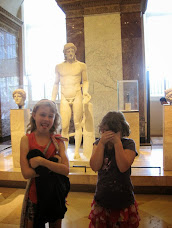 side, there was the door flanked by two huge Lion statues. Waited in line and ate our croissants, and once we got in we got held up a bit by clueless people in the ticket line but once we had tickets in hand we raced (and the girls did actually run) to the Mona Lisa. Success! Totally uncrowded. In addition, they keep people back farther from the painting than they used to, so more people can get a front row view. Everyone says the painting is smaller than they thought it would be, but I’ve been hearing that for so long that it was actually bigger than I thought it would be. We spent another couple of hours or so looking at other art (and admiring the Louvre itself, which was once the royal palace) until we totally tried Charlotte’s patience (I believe at one point she actually yelled “I hate art!”). It was funny embarrassing them with the naked male statues, though!

We then walked to Notre Dame and this time I insisted we wait in the line to get in. Not even a problem, it was moving so fast. We liked the statue of St. Dennis in the front of the cathedral, apparently he was beheaded but walked six miles before he died, preaching the entire way. We found the Chapelle Sainte Genevieve and of course one of the bells is named Charlotte, so the girls were happy. Notre Dame is nice, but those gothic churches do all blend together…

We walked across the Seine to the left bank where we got this awesome shot, and went to a few cute stores before we had lunch, the kids at 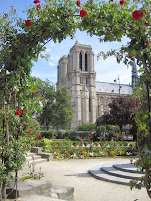 a creperie and Mark and I at a gyros place (but chicken gyros? Really?). We walked around some more and then took the metro back to our apartment. Mark and Charlotte wanted to hang out but Genevieve and I were restless so we headed back towards the Opera House where we went to the Fragonard perfume museum. Pretty much the same as the one in Nice but this time I liked the scents better so we bought some little perfume solids for G to keep in her purse, a sampler for Mamama as a thank you for watching the bird Pandora, and I got a cool bottle of perfume shaped like the Eiffel Tower. Then we walked back to the Place Vendome because Genevieve had been reading an article about Coco Chanel and she wanted to see the Ritz where she had lived.

Unfortunately it was totally not visible as it was being extensively remodeled. We walked around and window shopped at all the expensive places, and then returned to the apartment.

We left together and all took one last visit to the area nearby. We bought a tote bag for 10€ from a tourist shop to take home all our dirty clothes so we could fill our suitcases with all of our loot. And we stopped by La Cure Gourmande for treats for the plane. Oh, La Cure Gourmande, we will miss you so! We had a drink at a cafe, and then headed to dinner at a restaurant in our own little passageway. I don’t think we chose particularly well, our free range chicken took forever to come and when it did it didn’t taste that great (it may be heresy, but Costco really does make a mean rotisserie chicken, hard to beat). After our slow service we returned to the apartment to squish all our stuff into our luggage.