Today we were going to explore the hill towns of the Luberon. After the Romans left Gaul, the natives had to leave 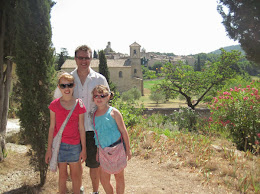 their nice Roman towns with running water and establish towns in the hills to protect themselves against barbarians. They lived there for hundreds of years, and then largely vacated them in the 19th and 20th 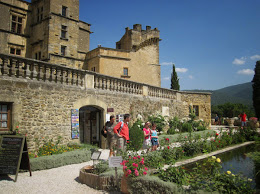 century. Only recently have they become popular again, probably because with an internet connection you can live anywhere. We decided to start our day with Lourmarin. It was nice to drive through the countryside with the stereotypical sunflower fields which really are everywhere. After an unscheduled stop at another town along the way we thought was Lourmarin (cute buildings at least) we arrived and toured the Chateau de Lourmarin. Then we went into the town of Lourmarin itself in

search of lunch. Man, it was hot. These hill towns have no shade and I swear (although I don’t see how it’s possible) that the light is brighter in Provence than it is here in California. Lourmarin is also the town of toddlers. For a few days we’d seen really no families at all and now all of a sudden everyone was sporting a stroller. Don’t know if it was a convention or what! After Genevieve and I nearly fainted from the sun and heat we did find a restaurant with inside seating and air conditioning. Much fortified after our food, we traveled on to the next hill town. On our way we couldn’t help but snap photos of the very picturesque Bonnieux. We stopped at the nearby Pont Julien, a roman bridge, for a few pictures.

Next up, L’Isle-sur-la-Sorgue, a town famous for its water wheels. Very cute little town. Right away we found an independent candy store 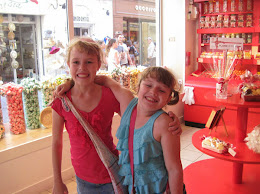 with the same kind of stuff as La Cure Gourmande only better (yes, it is possible although La Cure Gourmande rocks) Bought lots of stuff there, and then toured a colorful church and the water wheels. Also found our first squat toilet, a curiosity we didn’t try to utilize! Instead I walked purposefully into a nearby cafe with a much nicer restroom. Did I mention it was really hot? We cut our losses, and left the town after letting the girls dip their feet in the river. While we were there, we saw a hummingbird moth, very cool. I tried to take a picture but the darn thing was too small and too fast. We headed back to Aix where Genevieve was DESPERAT

E to get macarons at this one specialty store with all kinds of macarons in exotic flavors including liver and onions that had kind of limited hours, so she was motivated to get back early so we could go. We had the most fantabulous dinner at Pasta Cosy, a place I cannot say enough good things about. We had wine and tapas and for my main course I had these little purse pasta things filled with pears and cheese, oh so good. The girls had the signature dish of pasta made in a parmesan wheel. Then desert too naturally. So stuffed and so happy. At this time of year in France it gets dark really late, like 10:00, so we were going to bed later and later and later each day. Oh well!