This morning we got croissants at the boulangerie recommended by our landlord, but we found that we liked t 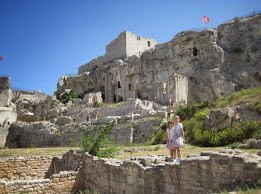 he ones at Banette better (these ones had more chocolate but they were a bit squished. The Banette were puffier and flakier). We had booked a tour with Donal, our landlord, to see a castle and go wine tasting. He picked us up at 9:00 so we could get to the castle, Les Baux, before it got too 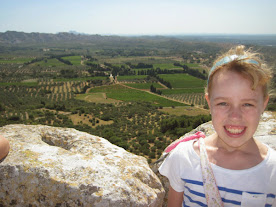 hot. Shockingly we were ready. We drove through the French countryside, went through St. Remy and some other towns, and then arrived up the hill at Les Baux. We got to the castle in time for the catapult demonstration, which was funny even if it was in French and we couldn’t understand what they were saying. Then we walked around the ruins, which are very extensive. That was one heck of a castle in its day. It’s also famous because the lord there was a pretty cruel guy and used to do things like toss opposing knights off of the castle walls. You can also get a great view of the French countryside below.

We rejoined Donal, who was a bit surprised we spent so long there (but we like that kind of stuff). 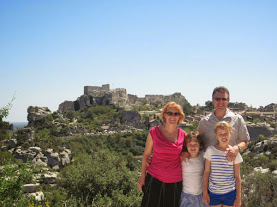 We had a nice lunch at a nearby restaurant, and then saw the Grace Kelly exhibit. Kids even more obsessed by her now. Next up we drove to the old bauxite quarry across from Les Baux, which is pretty impressive in its own right, and got this great photo. Then we drove through more countryside, stopping outside the gates of the mental hospital where Van Gogh was 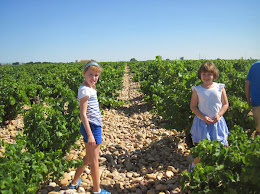 kept. There are also roman ruins nearby, and perhaps even more fascinating, bats in the old quarry tunnels.

Drove around some more and arrived in the Châteauneuf-du-Pape wine growing region, where we went to one of Donal’s favorite wineries. We got to try the grapes out in the vineyard and see the unusual way they are grown (in rocks that hold in the heat), then we went to the winery building itself. The wine was good, and the kids were good playing with their iPod Touches in the waiting area. We brought them back to the cellars so they could see the wine from the 1950’s. We bought a couple of bottles, one really nice to give to Marcus and Susie when we stayed with them later, and then drove home. It was a good day, but too much time in the car and too little actually seen for me.