Originally we had wanted to go on the boat tour of the Golfo Dulce today but they scheduled us for Wednesday so that meant we had a leisurely morning with breakfast and Monka again and then we went in search of a lavanderia so we’d have enough clean clothes to last us through Bosque del Cabo. 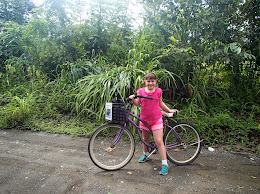 Found one in the lower floor of a building, dropped off our laundry and then returned to the hotel and Mark wanted to take out the hotel’s bikes and find the crocodiles. He was so picky choosing his bike! Finally he found one that would work for him and we headed out. Down the wrong road (well it started out as the right road but we 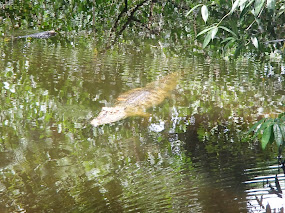 missed a turn). We rode for a while enjoying the Costa Rica-ness of it all but Charlotte was getting whiney so we turned around. We found the right turnoff and then the kids started to get really scared of the crocodiles. I have no idea what they were thinking but Charlotte started to cry and Genevieve wasn’t much better when we started off on our hike. Saw lots and lots and lots of Jesu Cristo lizards (even running on water, man I love when they do that) and finally a crocodile. Okay, so not so scary after all! We went back to the hotel and the kids got in the pool, and we talked to some other people from California and they recommended the chinese restaurant, El Delfin.

The kids wanted to go back to Il Giardino for lunch so we did that and it was just as slow this time as the day we arrived. This is not the place to go if you are in any kind of a hurry! After lunch we went to the beach and the kids enjoyed that. Then we headed into town to get our laundry and we wanted to go to Jagua but it was closed–their hours are 6am – 3pm, crazy hours for a craft store! We headed back to the hotel after stopping at the larger grocery store where I got some coffee to have in the room and Mark got some sodas.

Later we went to the chinese restaurant, which was not really chinese but whatever. I had chop suey, which reminded me of the stuff you got in a can (Chung King) when I was growing up. But Charlotte had the fried chicken, and man, it was fabulous. So that was worth the trip right there.