We had the most excellent breakfast in the hotel (included) ─ all the pastries and croissants you could want, make them yourself soft/hard boiled eggs with little disposable egg cups, lots of cheeses and meats, yogurt and cereal and of course coffee. Much fortified, 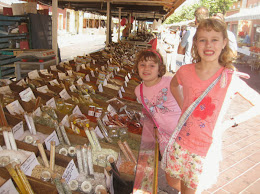 we set out for the day. Mark had done some research, and so we walked through Nice’s market in the Cours Saleya, where there were lots of spices and flowers and produce and arts and crafts. Wish I’d realized then that I might not stumble on another market quite so nice, I would have taken more pictures and maybe bought some stuff! We went up to the location of the old chateau, Colline de Chateau, where Charlotte grumbled mightily at having to climb so many stairs but once we got to the very top and there was this gigantic play structure she was very happy. She is quite the climber! We walked around up there a bit then headed back down through a nice residential area. This part of France looks a lo 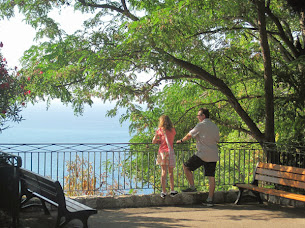 t like Italy, probably because it’s less than 50 miles away. We hit the old town shopping area, Vieille Ville, where we found our first nirvana, the chain store La Cure Gourmande. We had been told about this store before we left and their amazing choupettes (lollipops), and we had made a vow to not pass up any chocolate store or pastry store while in France, so of course we went in and bought some choupettes and olives au chocolat. Next up, a traditional charcuterie, where we discovered how head cheese got its name, it’s actually made in the head of a pig. Eeeew. Never ever going to try that! We made it to the Palais Lascaris, an old palace turned into museum that was nice to see and free. For a palace, it was very dark and the outdoor staircase would have been a pain in the winter and when it was raining, but it was nice to see an example of the 1700’s architecture.

The girls were itching to get their feet in the waters of the Mediterranean sea, so we gave that a try. It was bit difficult what with the rocks hurting our feet and the steep drop off to the water, but they both managed. It would have been nice to be able to swim, but considering our beaches are better we decided it wasn’t a good use of our limited time in this city. We had lunch at a restaurant nearby and then went back to the hotel to rest a bit. Mistake! Mark of course fell asleep leaving a restless me and the girls cooling our jets 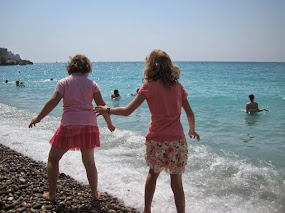 waiting for him to wake up. Finally I decided he wasn’t going to in time to go to the Chagall museum so the girls and I went back to the old town area for some shopping. On the way there Genevieve got her first macarons of the trip at LAC chocolatier. Once we hit the old town, Charlotte got a cute little purse in the shape of a birdhouse, and I got a cute shirt and a postcard made from an vintage travel ad for Nice. Once we got back to the hotel, Mark was finally ready to be up and so we went to a recommended creperie Brettonne. We had the girls each order a savory crepe but they didn’t much like them, although Mark and I liked ours. They were very fond of the desert crepes they got next though! We walked around a bit more and then headed off to bed for another sleepless night as we tried to adjust to the time change.