After breakfast of lovely pain au chocolat, we walked to the car rental place to get our car. Unfortunately, the car rental place that had been just down the street had moved over by the train station. So we walked there, and fortunately did find it even without an address. Even though they had moved over a month ago, they didn’t update the email confirmation (that I had received a day before) and their computers weren’t working yet either. They had to call the main office and do all the paperwork over the phone and then have it faxed to them. Very 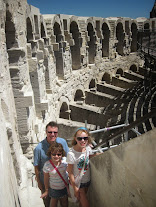 lame. But no matter, we got our car, a light green Citroen hatchback that was plenty big. We plugged in our GPS Wallace (because he has the voice of Wallace from Wallace and Gromit) and started driving while he acquired the satellite. It took so long we worried something was wrong, but he did finally start working. We followed his directions to Arles, going through a nice rural neighborhood on the outskirts of Aix.

We arrived a lunchtime and found parking in the outskirts of town in a free lot. We bought sandwiches and 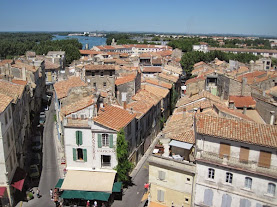 then ate them on the steps of a church in one of the town’s squares. We toured the church but didn’t pay to tour the cloister because we were concerned about time. We walked past the roman theater (in ruins) and to the roman amphitheater where they still have bullfights (they only pick on the bull, they don’t kill it). At one point there was a little village built right into the walls of the amphitheater, that’s how it was preserved, but they tore down the houses to expose the structure in the 19th century. You also get a good view of the town from the top of the amphitheater. Very cool to see it, but it was also very hot in the sun! We left right before the gladiator show that we didn’t know was happening until we’d left the gates, but no matter, we couldn’t have sat in the full sun to watch it anyway.

We walked around the town a bit and noticed a few of the houses had these watchtowers on them. I was wondering what they were for, 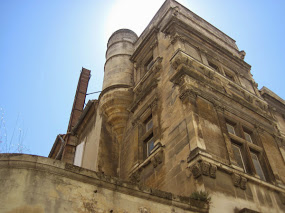 when I noticed the very helpful plaque nearby that explained that they were the thing for the fashionable in Arles in the middle ages. The other thing we wanted to see in Arles, the Museon Arlaten, where there were items from everyday life in medieval Arles, was closed for renovation, so we bought some ice cream and then headed to the Parc Ornithologique de Pont de Grau of the Camargue, where there are reportedly wild flamingoes. We pointed Wallace in the right direction, and then followed the signs to the parc (you need an exact street address to get the GPS to work, so we had to sometimes fudge that part). 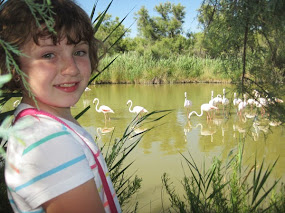 We arrived at the park through a nice drive in the Camargue, and sure enough, flamingoes! Who would have thought?! I associate flamingoes with tropical destinations and here they were among the roman ruins of France. These are migratory African flamingoes here for the summer. We got lots of photos ofthem, and then walked around a bit looking for other wildlife. We didn’t see anything truly striking, except for some leeches which were crawling on the trails. We were getting really close to them to try to decide what they were, but we sure backed off quickly when we figured it out! We drove home (thanks Wallace) and found our correct parking space in the garage, and made it back to our apartment.