We went to breakfast at the same buffet restaurant, and it was okay, nothing to write home about. One thing that was very cool about the Westin is that there were so many baby coatis around and none of them were that scared of people so you could really watch them, like in this video here. I’m starting not to like my fellow Westin Playa Conchal guests. There was a guy complaining that they “let the birds in” to an open air restaurant. In Costa Rica. Who even knows what he expected?! We walked to the pool after breakfast and talked to the resort staff there about ziplining, then walked along the beach briefly. We went back to our room and gathered our copious amounts of dirty laundry and headed up to the lobby to get our car and go find a lavanderia. As much as we were trying to be on the down low about not being able to afford the Westin’s usurious laundry charges, we did ask the guy at the front where the nearest laundry was. First time he ever got that question! But he found out for us, and we plugged it into the GPS and found the place with little trouble. The lady there spoke very little English and we of coruse speak limited Spanish but we got it sorted we wanted her to do the laundry and we’d be back later to pick it up. All for $15.00!

We returned to the hotel changed into our swimsuits, put on lots of sunscreen, grabbed our snorkel gear and went out to the beach with our towels obtained from the very good looking towel boy at the cabana. We had them bring out a couple of beach loungers for us, man did I feel sorry for that young man dragging those things across the beach as it was already quite hot! The girls played in the 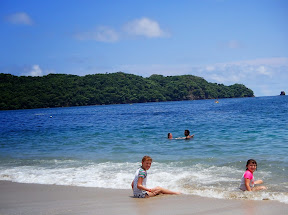 ocean (and I noted they were probably getting a ton of sand in their suits) and then we headed down the beach to the snorkel area. Charlotte was more interested in collecting shells (the conchal part of Playa Conchal) but Genevieve and I went out and saw a lot of cool stuff, parrotfish, a box fish, a large puffer and I spotted a purple octopus. But when I raised my head to get Genevieve to come over, I couldn’t find her anywhere. That is not the kind of feeling you want to have, that 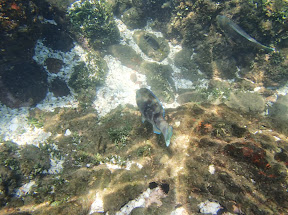 you’ve lost your daughter in the ocean! I finally did see her out of the water on the beach, apparently she’d been stung by a jellyfish! I was much more fortunate and didn’t get stung although I did see a couple little ones in the water. Genevieve started feeling better in about 10 minutes but she was done snorkeling. I went out a bit more but didn’t see much more than I’d already seen so we went back into the hotel grounds, where the girls used the showers there at the beach to get the huge amount of sand out of their suits. I doubt they will sit in the waves like that again! 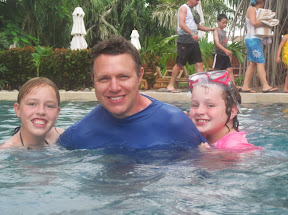 We had a good lunch at the little restaurant there, booked our ziplining adventure for the next day, and then played in the pool the rest of afternoon, while Mark went out to retrieve the laundry. He took a long time to return and I had visions of him in a Costa Rican jail but it turns out there was just an issue with a truck blocking the entrance to the resort. And I love the all inclusives where they constantly come by offering you food and drink. Too tempting!

For dinner we were going to Mediterra, a meditterenean style restaurant. Man, that food was fabulous! Service great too. It would be great even if it weren’t included in the price, you would seek out a restaurant like this!