Today we decided to brave the crowds and go to Versailles. We got up early but not crazy early, got our pan au chocolate from the 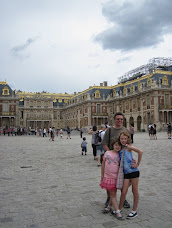 bakery on the corner, and then headed to the metro to the train. We’d verified that the train that we needed would be available, and it was as long as we took the metro to the stop after the tracks were closed. We got on our train which wasn’t that crowded, and got to Versailles at about 11:00. The lines to get in were long but not unbearable. We entered and then went through the gardens to the Trianon. There was some confusion as they wouldn’t let the girls into the gardens until we bought a ticket. All info we had said that the gardens would be free on a Wednesday but apparently not. Our combo ticket got us in but because they were kids they didn’t need a ticket for the palace but they did need one for the gardens. Whatever. At least there was a ticket booth right there without too long of a line. Through the gardens and then we decided we’d better eat lunch before we toured the Trianon. The girls had crepes and Mark and I had sandwiches, which weren’t bad. We fed the leftovers to the swans.

The Trianon was very nice, I really feel bad for Marie Antoinette. She was in the wrong place in history – for the most part she was just a very naive woman who didn’t get what was going on around here. Didn’t deserve to be beheaded! 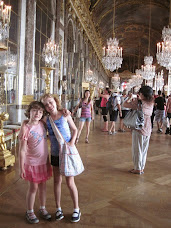 Then we went on to the main palace. We lost Mark somehow and that was a little bit stressful for about an hour not being able to get hold of him and not sure if he was ahead of us or behind us. We waited in the grand hall for quite a while and fortunately he showed up. Whew. The palace is interesting, but I remember when I read about it as a kid and I just thought Versailles had to be the most amazing place 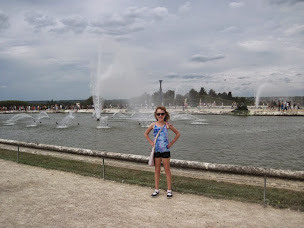 ever and it didn’t really strike me that way. Probably because it was crowded and the weather was getting weird, overcast and windy even though it was warm. The gardens are dusty too, so when it gets windy it kicks all that dust into your eyes. Not cool. They turned on the fountains (which is why they charged for the gardens) and it was nice to see them. Although again not all that. I think Bellagio in Vegas has spoiled me for impressive fountains!

Versailles was starting to close, so we joined the hordes going towards the train 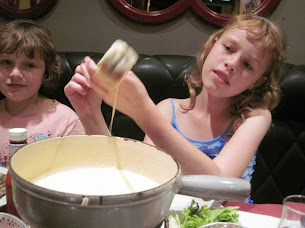 station. Unfortunately that morning we’d neglected to buy round trip tickets just because we didn’t press the right button. So now we had to wait in the line for an attendant to sell us a ticket because our credit cards wouldn’t work in the machines and they didn’t have a machine that took bills. Got our tickets, and crammed onto the next train. Mark, who doesn’t like crowds, was not happy at all. But we made it back to Paris in one piece, and freshened up in the apartment and then headed out to find dinner. We didn’t pass anything interesting, and I had remembered passing a few times a fondue restaurant but couldn’t find it again, and finally we gave up and went over to where the cafe from the day before was, and there was the fondue place. Genevieve and I had the most gigantic vat of fondue ever, and Charlotte finally decided to try it and decided she liked fondue after all (yeah, melted cheese and bread, what’s not to like!). And then back to the apartment to rest up for our last day in Paris!