No rain today! Yay! Took our cold showers (and when I went to turn off the water a wandering spider 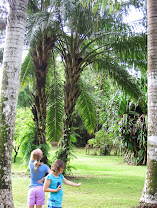 lunged up at me from the plants, fortunately it decided I was too big to mess with and went quickly back from whence he came). We took a nice hike before breakfast to the Golfo Dulce view and around the tropical garden where we saw lots of capuchin monkeys, and then had breakfast. We asked Phillip where the sloths usually hung out because we wanted to spot one, but he said it was unlikely, however he did tell us where to look. Then it was time for our tree climbing. Carlos was our guide, the one who took us bird watching on our last visit when we got the awesome picture of the frogs in the pond. We reached the tree and then it was decided that I would be first to climb the inside of it. Genevieve lent me her socks because it turns out you climb a tree without shoes and I hadn’t worn socks that day. I got half way up and realized I was seriously shaking! I didn’t know I was scared until that moment. But the kids were watching and I wanted them to do it so I just kept going up. Made it to the top where Carlos was and then I swung out to the outside of the tree and went down. I had to keep feeding the rope out to get down but because of the aforementioned fear I wasn’t really doing that so 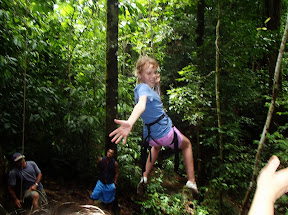 my descent took a lot longer than I wanted! But I did finally make it down. And I’m not doing that again. Next up was Charlotte. She’s a really good climber and clambered right up but then she couldn’t figure out where to put her feet and got frustrated and wanted back down. So we asked the guys to lower her. Then Genevieve went. She kept going up and up and up and then when it came time for her to rappel down the outside she was whooping and hollering, having the greatest time. Pretty much the opposite of how I felt! Finally Mark went. He didn’t want to go barefoot which made it a lot harder for him because the footholds weren’t large enough for his shoes. But he did make it up and then down the outside.

We all hiked back to the lodge and cleaned up a bit in our room and then Genevieve and I hiked the Titi trail looking at the trees Phillip mentioned for the sloths while Mark and Charlotte relaxed. We didn’t see much but some spider monkeys eating in the trees 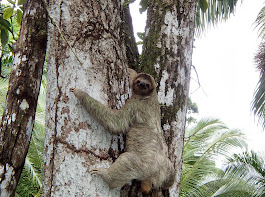 along the driveway, but when we returned to the lodge we heard a sloth had been on the ground to poop (they come down once a week for that). Man! Fortunately Genevieve spotted him still very low and visible so we got good photos anyway. And when we hooked back up with Mark and Charlotte we found that the spider monkeys and capuchins had all visited the hotel grounds. So we took the hike for nothing and actually would have seen more if we’d have stayed back! Mark and Charlotte were gloating and saying “laziness pays”!

Another great dinner socializing with the other Fodorites, and off to bed.