I took one for the team and agreed to go horseback riding with the girls even though the last time I’d gone I’d remembered how much I don’t like it because I don’t like the feeling I get from knowing I have no control over the horse. We went to breakfast and then headed to the Los Lagos stables. At first it was only us and then two people joined so he had to get their horses ready. He put me on my horse and then a bus load of Korean tourists from LA arrived, and he had to round up 15 more horses. And he didn’t take me off my horse! So I’m sitting there kind of in a panic as my horse tries to get back into the stable with me still on her. Genevieve was walking me through what to do to keep me calm and then finally the guy understood I REALLY didn’t want to be on the horse and helped me off. Everyone got saddled up and I remounted my horse and we set off. The horses have a tough time here, steep grades and rough and mucky terrain. At one point my horse started to go a different way than the others that would up with her having to jump off a small cliff. I was saying to the guide “uh, uh, my horse, what do I do?” and he said “Don’t worry, Carnelo is a professional horse”. Okay then. I will let the horse do what the horse wants to do and hope for the best. Apparently part of what the horse wanted to do was run me into the branches of the trees overhead but I guess that’s what the helmet is for! 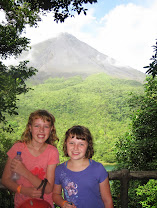 volcano! After our break, we began the descent to the old Los Lagos site near the pond. After the tourist and a guide died in a pyroclastic flow in 2000, Los Lagos decided that being directly in the potential lava flow wasn’t the greatest idea and built on their current much safer site. Once we got down to the pond 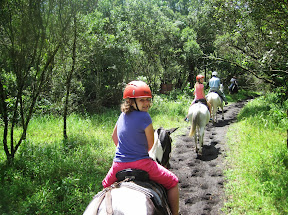 it was just so pretty and relaxing I was really glad I’d gone on this ride. Also the other people on the tour were really nice, the Koreans were one heck of a fun loving group and the couple were nice too. Funny how the guests at the cheaper place are so much classier than the guests at the much more expensive place! And Carnelo WAS a professional horse! Afterwards we gave the guide a tip but we really wanted to tip the horses!

We then visited the Los Lagos gift shop and they actually had some pretty nice stuff. We met up with Mark right before he went off on his hike to the Volcano overlook, so we returned to the gift shop and bought a bunch of stuff. We went back to the Gecko Grill for lunch and then stopped at the grocery store so I could pick up some Linzano salsa (really good stuff, they should sell it here!) and then we stopped at a woodworking shop along the road and bought a few more things, including mustache earrings. Which you know are a trend when you find them at a woodcarving store in Costa Rica!

Then we played in the pools the rest of the afternoon and went to Anchi-o for dinner. At first the girls were very upset because it looked like a gecko battle overhead had become fatal for the smaller gecko involved, but he did live to fight another day. And the food was very good.